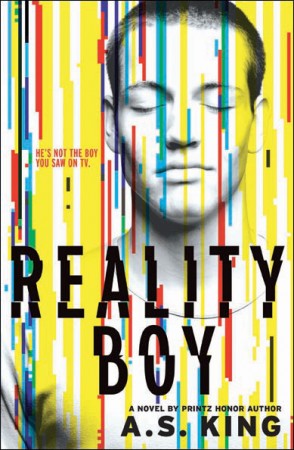 Gerald Faust knows exactly when he started feeling angry: the day his mother invited a reality television crew into his five-year-old life. Twelve years later, he’s still haunted by his rage-filled youth—which the entire world got to watch from every imaginable angle—and his anger issues have resulted in violent outbursts, zero friends, and clueless adults dumping him in the special education room at school.

Nothing is ever going to change. No one cares that he’s tried to learn to control himself, and the girl he likes has no idea who he really is. Everyone’s just waiting for him to snap…and he’s starting to feel dangerously close to doing just that.

In this fearless portrayal of a boy on the edge, highly acclaimed Printz Honor author A.S. King explores the desperate reality of a former child “star” who finally breaks free of his anger by creating possibilities he never knew he deserved.

How did I get this book: ARC from the Publisher (via BEA)

Why did I read this book: In spite of a bumpy start, I now consider myself a huge fan of this author. Will read anything she publishes.

Gerald Faust is angry. It seems like he has always been angry. When he was five years old his anger and misbehaviour led his mother to sign up for the reality show that ruined his life by making him angrier and in front of the entire world too.

Now, twelve years later, he is still angry. His first reaction to anything and everything, especially toward his older sister, is the need to punch and to hurt. With the help of his anger management coach he has learnt to control some of his anger but there is a clock ticking over his head. Everybody – including Gerald himself – seem to think that he is bound for jail. There are zero expectations that he could ever make it to college, he has no support at home, and no real friends. There is nothing else for Gerald but to maintain his self discipline and to carry on until the inevitable happens.

But then there is a turning point and Gerald finds out that hope might well be the worst/best feeling that there is.

Alternating the narrative between now (as Gerald becomes more self-aware) and then (when the reality show was being filmed), Reality Boy explores, amongst many things, the voyeuristic nature of reality shows, the idea of “inevitability” and the difference that a supportive net of any kind can do.

The reality show that Gerald’s family take part on is one of those Supernanny-like shows. I never thought about this before, but Reality Boy asks these questions: what happens to those kids? Those kids that have been deemed “naughty” in front of the entire world, what kind of burden is that? The shows are edited for maximum effect and behaviours are exacerbated for audience engagement. It seems like such an obvious thing to say but this book really strikes a chord in the way that we invite those stories into our homes but do not think of the consequences to those involved especially when they are children that have no say in the matter.

Gerald’s family’s run on the program makes him somewhat famous as the “Crapper” because part of his misbehaviour was to leave faeces all around the house and in front of the cameras. Now at seventeen, he is still seen as that boy. His classmates call him the Crapper and he still feels like that boy. That boy trapped in a situation he has no control over. It doesn’t matter that he has a reason for his anger and a very good reason too. There is a secret in his family and one that no one dares to say anything about: that his older sister is dangerous. Their mother turns a blind eye and plays favourites. Their father is equally scared but non-present.

No wonder Gerald is angry and feels like he has nothing but anger to contribute to the world. Because anger is all he has.

But the narrative makes it very clear to the reader from the start that Gerald is simply a traumatised boy who has an extremely dysfunctional family that blames him and his behaviour for their problems. It is easy for us as outsiders to see these things: not so easy for Gerald. His world is a very small one and he has developed a self-involved, narcissistic personality which prevents him from truly seeing a way out. The author brilliantly writes Gerald, his sense of powerlessness and the slow change to finally take control of his own life.

It is the kindness of strangers that sets things in motion for Gerald to free himself from the vicious circle of violence and self-hate that he is trapped into. A compassionate hug from a viewer who understood how bad he had when the reality show was on makes him cry for the first time in years. It is this moment that allows for Gerald to truly open his eyes and allow for a modicum of hope that perhaps he doesn’t have to be angry. That perhaps jail is not where he is going to end.

And one of the most important things to allow him to break free, to help him grow up and beyond these limitations is his falling in love. The relationship that develops between Gerald and his co-worker Hannah is a thing of beauty. It is raw, complicated and extremely poignant. Gerald has received conflicting messages about girls all his life, especially from his anger management coach (“girls are infuriating, stay away”) and has to move past them to be able to relate to Hannah. Hannah also has personal baggage to deal with and I loved how the story shows that sometimes all it takes is one single person to make you see the world in a different light, to see that there is more. Although I often mistrust stories that place the importance of romantic relationships above all others, romantic love when done well like in here is undeniably a powerful tool.

The only thing that leaves me with an uneasy feeling is that I feel that there are deeper conversations to be had about having a psychopath for a child. I know that in the end, for this specific story and within the scope of his narrative, it was important to think about Gerald’s safety and mental state first but I wished for more on that front and for some resolution there.

A.S. King writes gut-twisting stories about teens in difficult situations and she writes them with aplomb. More than that, her stories and her characters are written with a level of compassion, with a level of sympathy that make her stories beautiful, fierce, and significant. I just can’t get over how good Reality Boy is.

Notable Quotes/Parts: I love this bit:

“I nod because my inner director told me to nod. This is the scene I want on TV. Boy makes good of himself. Boy calls himself on his walkie-talkie and says, dude – you’ve better than this. Why are you letting them do this to you? Boy meets girl. Girl writes ASSHOLE on his dashboard and then erases it with magic junkyard solvent the next morning. Boy finds life worth living.

This should be a reality TV show. Except nobody would watch because it’s no fun to watch normal people do normal things. Because happy stories aren’t all that interesting.
Because everyone wants to eat that shit sandwich, or watch other people eat it, along with exotic bugs and rotten eggs and diesel fuel and everything else producers can think of to keep viewer’s thumbs away from the channel button on the remote control.

Reading Next: The Crystal Cave by Mary Stewart