Old School Wednesdays presents Thea’s epic reread of The Dark Tower Series by Stephen King. May we be well-met, fellow traveler. THIS MONTH ON THE DARK TOWER: The Waste Lands has long been Thea’s favorite book in the Dark Tower cycle… and so far, it still holds that coveted spot.

The journey back to Mid-World, to the dead and poisoned lands beyond continues here with The Waste Lands (Dark Tower 3). 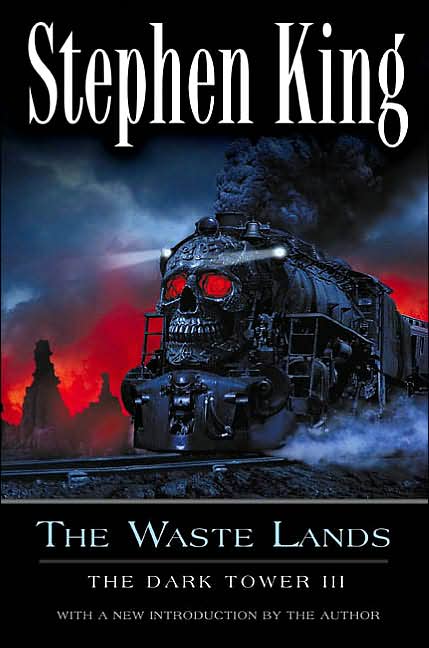 Roland continues his quest for the Dark Tower, but he is no longer alone. He has trained Eddie and Susannah—who entered Mid-World from their separate whens in New York City in The Drawing of the Three—in the old ways of the gunslingers. But their ka-tet is not yet complete. Another must be drawn from New York into Mid-World, someone who has been there before, a boy who has died not once but twice, and yet still lives. The “Ka-tet,” four who are bound together by fate, must travel far in this novel encountering not only the poisonous waste lands and the ravaged city of Lud that lies beyond, but also the rage of a train that might be their only means of escape. The stunning Plume edition features full-color illustrations by Ned Dameron and is a collector’s item for years to come.

Picking up immediately after The Drawing of the Three, The Waste Lands follows Roland, Eddie and Susannah as they move from the treacherous beach of their drawing, to the woods and world beyond. They are now a tenuous ka-tet – or, in Roland’s speak, a group connected by the great wheel of destiny. They have a powerful bond, these three, sharing not only fate, but at times their thoughts, emotions, and even images. As the days pass, the bond between them grows ever-stronger – Susannah and Eddie’s relationship deepens, as does their skill as gunslingers in training. Under Roland’s harsh but fair tutelage, these two New Yorkers from different Whens learn about the cold steel that settles in one’s veins when it is time to fight. 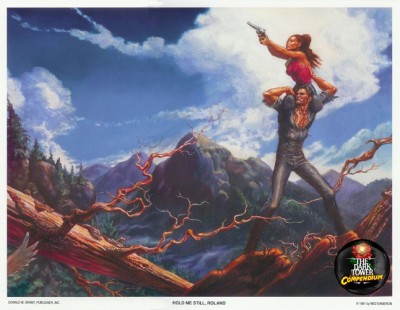 As they head deeper into the woods and Mid-World beyond, the trio find one of the last great fabled Guardians – and, more importantly, they find the Beam. One of the supporting rods of energy, the Beam is a ley line of sorts, connecting two of twelve portals in a bisecting line across the great circle of all the worlds. And, at the intersection of all six beams lies the nexus of time and space and size itself: The Dark Tower. With a path to travel along (think of it as their very own sadistic version of the yellow brick road), the ka-tet makes their way deeper into Mid-World, and the Waste Lands that lie beyond. There’s just one small problem, hindering their journey.

Roland, the fabled last gunslinger of the line of Eld, is losing his mind.

Torn between two realities that cannot co-exist, Roland is tortured by his own impossibly warring consciousness: he remembers sacrificing Jake and letting the boy fall in his quest to catch the Man in Black; he remembers stopping Jack Mort before Mort killed Jake. It is a paradox, an impossibility, that consumes the Gunslinger in Mid-World – and by the same token, tortures young Jake Chambers who knows he should be dead but is somehow alive in New York City.

In order to make their way to the Dark Tower, Jake must walk from his world into Mid-World and join Roland’s ka-tet in full – though it will be no easy thing. Even once reunited, the group has to contend with the rotting corpse of a ruined city with warring factions so far gone in their fighting over the centuries they no longer remember what they are fighting for.

And waiting for them, at the edge of the Waste Lands, is a train – if they are brave enough, quick enough, and true enough to endure the journey. 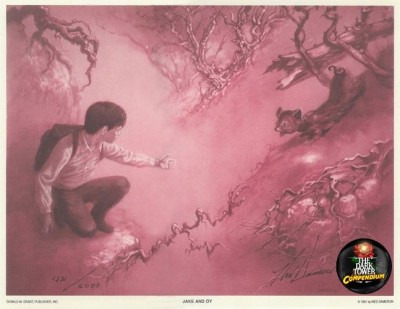 The third book in Stephen King’s epic Dark Tower cycle, The Waste Lands has always been very near and dear to this reader’s heart. It is the book in which Roland atones – at least in part – for dropping Jake Chambers in The Gunslinger (book 1). It’s the book that shows us more of Roland’s crumbling, decaying, sickening world, and feel the true meaning of his mantra, “The world has moved on.” It is the book in which Eddie Dean struggles and learns to free himself from the fear and ghost of his manipulative older brother. It is the book in which Susannah embraces her true self – Detta, Odetta, and this new third woman that embodies them all.

I loved The Waste Lands when I first read it, many years ago, and it has since been my favorite volume of The Dark Tower series. I’m happy to say that so many years later, after re-reading the book once again, it remains my favorite. (At least… so far. The Wolves of the Calla gives The Waste Lands a run for its money.) 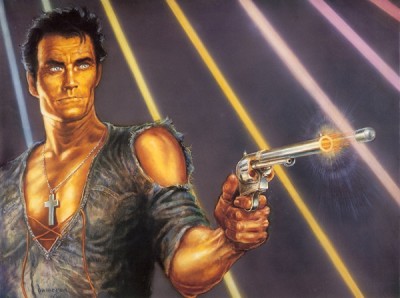 In my mind, The Waste Lands is broken into two parts: the part before Jake, Roland, Eddie and Susannah are united, and the part when the full ka-tet makes its way toward, through, and beyond the nightmare that is the City of Lud.

In the first part, we learn more about Eddie, Susannah and Jake as individuals. Eddie has shaken the monkey of heroin (mostly), but he is still haunted and plagued by insecurity. In this book, more than any other, Eddie seems incredibly young. Without the specter of his brother questioning and chiding his every move, Eddie must rely on something far more terrifying: himself. (Sidenote: I loved the glimpse we see of Eddie and Henry in the past, through Jake’s eyes. It’s a very different picture of his brother than Eddie paints in his head, and that new observation is an incredibly insightful one from Jake.) Quick to anger and to frustration, Eddie is surprisingly sensitive and soft-hearted – certainly, he’s the less self-assured one compared to wife, Susannah.

OH SUSANNAH. If there is a born gunslinger in the group, one who understands Roland’s battle rage, it’s Susannah Dean. More than once, Susannah saves the ka-tet’s bacon – with Mir/Shardik the bear and her husband’s life, with her voluntary (though no less horrific) besting of the sex oracle demon in the speaking circle to pull Jake through the worlds, to the city of Lud and her gunslinger instincts, to her memory of prime numbers.

One thing I love very much about this core group is that every single member plays a vital role in the group’s progression – without any one of them, the Dark Tower would be impossible. Eddie is necessary for his visions and ability to carve items from wood, Susannah for her memory and her viciousness, Roland for his obvious skill and centrality, Jake for his intuition and foresight, and Oy for his heart and loyalty. Seeing these characters come together and start to work together, to trust in each other – not that tenuous, frail trust that is based on survival and nothing more, seen in The Drawing of the Three – that’s no small thing. In fact, it’s really fucking awesome.

And it’s necessary, because Roland’s world? It’s all kinds of fucked up.

The first indication is the rotting, maggot-sneezing, android-Guardian-Bear, who nearly has Eddie’s hide. For the first time, we learn about a corporation (which we will hear about again and again) that has created these miracles of technology and magic – like the Guardian bear which would protect one end, one portal, one side of the Beam. (Mir’s counterpart is the Turtle, of enormous girth…who also plays a major role in King’s other books. It, I’m looking at you.)

The second indication is the city of Lud – a Mad Max-ish complete devolvement of human society and civilization. The backstory for Lud – a city once great and powerful, built on miracles of technology suspended by the Beam – is incredibly pessimistic and horrific in its scope. Lud falls in the aftermath of a prolonged war, and its inhabitants fight and torture and pillage for no reason other than the fact that they always have. The city is littered with corpses (that apparently smell of the cinnamon sugar that one would put on breakfast toast), and has been slowly driven mad – by fighting, by the menace of drums that play intermittently, by a sentient technology that no longer has any purpose but to cause chaos. 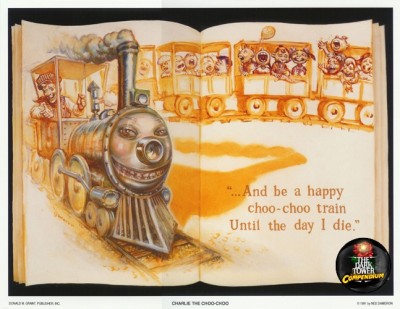 The third indication… well, this is where Charlie the Choo Choo, aka Blaine the Mono, comes in. (Sidenote: Jake’s essay in class, his stream of consciousness confession of what he knows to be true, is one of my favorite things. Not just because it’s hilarious that he gets an A for it, but because it is so inherently creepy.) Charlie the Choo Choo is one of those things that connects each of the three former New Yorkers – each one of them has interacted with the children’s book (probably the exact same book Jake brings with him) in some way in the past. And Charlie/Blaine is the ka-tet’s future.

So how does The Waste Lands shake out, at the end of the day?

I loved it. And I cannot believe that it ends the way that it does (CLIFFHANGER!) and that Stephen King took 10 YEARS to publish the next volume in the series.

Lucky, you won’t have to wait that long to find out if Roland and his ka-tet are able to outsmart Blaine.

Next: Wizard and Glass on June 10.