The Kitschies are the UK based awards that reward the year’s most progressive, intelligent and entertaining works that contain elements of the speculative or fantastic.

The Golden Tentacle is awarded annually to the debut novel that best fits the criteria of progressive, intelligent and entertaining. The book must be the author’s first published work of novel-length fiction in any genre. This year’s Golden Tentacle finalists:

We have been invited by the organisers to participate by examining one of the books shortlisted using the same criteria that the judges do – that is, weighing them up in terms “progressive, intelligent and entertaining.” The book chosen for us is Tom Pollock’s The City’s Son. 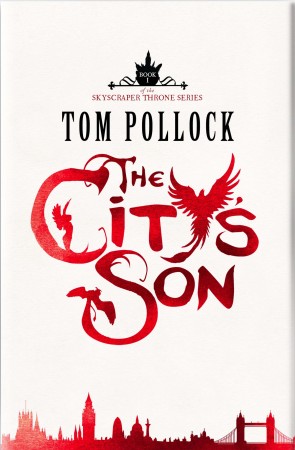 Published in the UK by Jo Fletcher Books (hardcover, 480 pages) in August 2012, The City’s Son is a good example of Urban Fantasy. In it, London comes to life and is a character as much as its protagonists. The City has its own arc and its tale interconnects with those of the other characters in both obvious and subtle ways.

The City of London is on the brink of destruction as an old threat surfaces from the ashes and is building itself up. Reach, the King of Cranes, is a God of demolition: be gone old masonry buildings, give way to the growth of new, shiny monsters of glass. Aided by the unstoppable manic Mistress of the Wire, there seems to be nothing that can stop Reach. Especially not when Mater Viae – the old Lady of the Streets, the Goddess of London, and the protector of the City – has been gone for such a long time. Filius Viae, Mater’s only son, is the cocksure Crown Prince whose sweat and blood are as grey as the City itself, and whose strength comes from the City’s pavements. Now, Filius is all that stands between Reach and the City.

Enter Beth Bradley, teenage graffiti artist and regular human, oblivious to this hidden London. Beth stands at a very vulnerable crossroads in her life: she’s been horribly betrayed by her best friend, and as a result is expelled from school. At the same time, Beth is completely ignored by her father, who has retreated from the world after Beth’s mother’s death a few years earlier. One night, Beth stumbles upon a lonely escapee ghost train and is introduced to a world she never thought possible.

Beth and Filius unite to save their city.

Ana actually reviewed The City’s Son last year, this is an excerpt from her review:

Beth loves this city. She might not know it the same way Fil does, but she has explored its nooks and crannies. She has marked them with her art – London is as much hers and it is Fil’s. And so is the responsibility to save it. So yes, she steps up, for there is real motivation here – both in terms of the real threat to her city but also the dismantlement of her emotional connection to the London she knows. She has nothing to lose and much to gain. There is no going back though, Beth, are you SURE you are prepared for it?

They share the narrative, these two characters – one has known this City all his life. The other is only but starting to get to know it and she is the perfect guide for the reader’s own discovery of this new version of London. There is awe but very little shock when she encounters these marvels (people made of glass and light; an entire army of entombed priests with their real flesh horribly trapped inside stone and marble).

There is a lot to digest here – and I have been less than systematic in my appreciation for this brilliant UF story. There are so many different threads to follow: the City’s arc, with its rich, vivid history. Fil’s arc and the build up of tension as he accepts the role as the City’s Son. There are battles in a war and an army that needs to be put together. And all the awesome characters with their bravery, their loyalty, they willingness to sacrifice. I suspect subsequent re-reads will unveil much more.

You can read the rest HERE.

Let’s start with entertaining, because that’s easy: The City’s Son is definitely a fun book – how else one could describe a book that features characters running across London, coming across ghostly trains from times past, people made of glass and light, and world-building based on a unique mythology that is a mixture of past and present? There is definitely a sense of familiarity in the premise of a “hidden London” – but the fact that London itself is alive and beaming and ever-changing even as its characters come and go makes up for it.

I see the “progressive” and “intelligent” elements intertwined; one does not exist without the other. London as depicted in The City’s Son is a multicultural city whose face is ever changing as its inhabitants change. And, with these changes taking place, there is some political discourse in The City’s Son too, as progress and tradition battle literally to take over the city (regardless if one sees the juxtaposition of “future” x “past” as a dichotomy at all).

There is bravery in the writing, as the novel portrays young characters as people, with wholly formed motivations and independent story-arcs. Tom Pollock obviously does not subscribe to the idea that teens need to be pandered to, or talked-down to – there is respect for both his intended young reader audience as well as for the youthful characters themselves. The City’s Son is a book that sits within the beautiful spectrum of smart, engaging, thought-provoking, and progressive YA fiction. It also passes the Bechdel test, thank you very much, as one of the main focuses of the story is the relationship between best friends Beth and Pen.

As such, The City’s Son is a book that does fit the award’s criteria for progressive, intelligent and entertaining works and therefore deserving of its nomination.

The 2012 winners will be announced on Tuesday, 26 February at the Free Word Centre, London.

Book Review: The Sorcerer of the Wildeeps by Kai Ashante Wilson