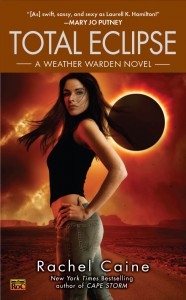 Stand alone or series: The ninth, and final, book in the Weather Warden series

Weather Warden Joanne Baldwin, her husband, the djinn David, and the Earth herself have been poisoned by a substance that destroys the magic that keeps the world alive. The poison is destabilizing the entire balance of power, bestowing magic upon those who have never had it, and removing it form those who need it. It’s just a matter of time before the delicate balance of nature explodes into chaos-and doom.

Why did I read this book: Again, the question should be, why did it take me so long to read this book? I’ve had the ARC for months now. MONTHS. And yet…I couldn’t bring myself to read Total Eclipse. The Weather Warden series is my second favorite Urban Fantasy series, and the fact that this paperback volume would be the final adventure of Joanne Baldwin…well, let’s just say I had to work up the emotional muster to face this particular book. With the end of the year rapidly approaching, I knew it was finally time to crack open Total Eclipse, and bid my one of my favorite heroines a bittersweet farewell.

**THIS REVIEW CONTAINS UNAVOIDABLE SPOILERS FOR THE FIRST EIGHT BOOKS IN THE WEATHER WARDEN SERIES. If you have not read the prior books and do not wish to be spoiled, look away! (Also, if you haven’t read the first eight books, you really should not be reading this review. But go out and buy Ill Wind. Seriously. NOW.)**

Joanne Baldwin, former Weather, Earth and Fire Warden, wife to leader of the new djinn, David, and sassy badass finds herself facing the end of the world. After defeating nemesis Bad Bob Biringanine for the second time, Jo and David find themselves completely and utterly human – without any warden or djinn powers. As the cruise ship carrying the wardens and a number of powerful djinn makes its way back to harbor, everyone on board find themselves locked in a “black corner” – an aetheric dead spot, sapping the energy and powers. Even worse, when the ship emerges from the black corner, the djinn – dying, frightened and bereft of power – disappear.

Mother Earth is waking up, and she is pissed.

The now all-too-human Jo must figure out a way to restore her own powers, and David’s, before the world itself ends in a blaze of fury.

A bit of a disclaimer – in an attempt to refrain from spoiling *anything* in this last book, I’m keeping this review much more emotional (and less about specific plot points). Total Eclipse was a difficult book for me to read, and nearly impossible for me to review – I’ve been with Joanne Baldwin and David for…years. Each impossible scenario, each death-defying experience, each cliffhanger ending, I’ve endured it all over the course of these nine books, so reading Total Eclipse was something of a crazy, emotional, cathartic experience (On a side note, why does it feel like everything is ENDING this year? 2010 is a cruel, cold-hearted bitch of a year – Lost is gone, Harry Potter is in its own climactic finale, the tragic Mockingjay hit shelves with a vengeance…). I’ve come to look forward to each August, with another insane installment in the very tried and tired Joanne Baldwin’s extraordinary life. And so, when I began Total Eclipse, it was with the knowledge that there would be no further adventure. This, for better or for worse, was the end of the line. So, you can understand, it took a great deal of mental preparation to start this ultimate Weather Warden book.

Not that there was any doubt in my mind that this last book would be anything but fantastic (if you’re a die-hard fan of this series and have stuck with it through all the books, you know exactly what to expect, and Ms. Caine always delivers). All the threads of Jo’s life, everything she has gone through over the course of the series comes together in a dramatic whirlwind of action and power in this novel. Total Eclipse is Jo coming full circle in many ways – from familiar faces and locations to another treacherous ride through the desert in a sweet midnight blue mustang, There’s a thread of destiny, of some larger pattern of the universe at play, too, with the makeup of the Jo, David and Lewis relationship fully coming to fruition and understanding. I’ve always loved Lewis, and thought that the series would ultimately end with this particular development for his character. Another welcome character development was Cherise and her own journey of power and revelation in this book. And, of course, one of my favorite characters, Rahel, has a bit of facetime here too and makes an emotional (well, for a badass djinn) reveal of her own. I loved it all.

Of course, the heart and soul of the series lies with heroine Jo and her match in David – and good god, the stakes have never been higher. Jo’s hero complex takes a different form in Total Eclipse, and she’s forced to find a way to cope and try to save the world without the aid of her warden powers – of course she’s as resourceful (and sassy) as ever. And of course, then there’s David. Like I said earlier today, I’m not a huge romantic, but when I find a pair that *does* it for me, I am fiercely loyal and buy into the romance hook, line and sinker. Jo and David are one of those pairs for me, and their relationship in this final novel is every bit as complicated, sweet, and heartbreaking as it has ever been.

Was Total Eclipse a perfect book? Well…no. Certainly not by any literary or stand alone basis. But it is a fitting, beautiful ending, fraught with heartache and action and danger, to the series. And this is very much my summation for the Weather Warden oeuvre: I could not ask for anything more.

So, to you Joanne Baldwin, I say goodbye. I will miss you so very, very much, and I cannot think of a better way to end this incredible series.

It was one hell of a ride.

It was the name Wardens – and Djinn – gave to a section of the world that had been scorched by something unnatural; a place where the basic energy that coursed through the world, the pulsebeat of the Earth, no longer existed.

A black corner looked fine, but to anyone with a sensitivity to power, it was desolated and sterile. Wardens – those who controlled the basic powers of nature – suffered when they were trapped inside of one of these dead zones. Still, we got off better than the Djinn.

We’d been trapped in the massive black corner, sailing hard for the horizon, for days, and it was taking its toll at an increasingly horrible rate.

It was so hard, watching them suffer. It was slow, and painful, and terrifying to watch, and as our cruise ship sailed ever-so-slowly through the dark, empty seas, trying to get outside of the supernatural blast radius, I began to wonder if we would make it at all. The New Djinn – the Djinn who’d been born human, at some point, and become Djinn during some large-scale disasters – were in a lot of pain, and slipping away.

Still, they fared better than the Old Djinn. Original, eternal, with no real ties to humanity at all – they declined far faster. In a very real sense, they couldn’t exist on their own, without a direct connection to power – a connection that was nowhere to be found now, even though we were many miles out from the site of the disastrous ending to our fight with my old enemy. He’d opened a gateway to another dimension, and what had come through had almost destroyed me and David; it had definitely blasted the entire area for hundreds of miles in all directions.

I couldn’t imagine what the consequences of that were going to be; it was a terrible disaster, and I felt responsible. Hell, who was I kidding? I was responsible, beyond any shadow of a doubt. I was recovering, myself, from the aftereffects of the long battle, and the injuries I’d gathered along the way, but that was secondary to the guilt I felt about how I’d handled things.

You can read the full excerpt (and other sample chapters) HERE.

Additional Thoughts: Two characters make a welcome (and pretty strong) appearance in Total Eclipse – the former djinn Cassiel and her Warden, Luis Rocha. Cassiel has her own spinoff series set in the same universe – so while Jo’s books may be complete, Weather Warden fans can at least look forward to more of the same universe with the Outcast Season books. And, if Cassiel and Luis’s cameo in this book is any indication, perhaps we haven’t seen the last of Jo, David, and Lewis. The next book in the Outcast Season series is coming early next year. 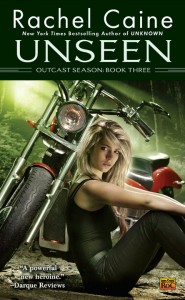 After Cassiel and Warden Luis Rocha rescue an adept child from a maniacal Djinn, they realize two things: the girl is already manifesting an incredible amount of power, and her kidnapping was not an isolated incident.

This Djinn-aided by her devoted followers-is capturing children all over the world, and indoctrinating them so she can use their strength for herself. With no other options, Cassiel infiltrates the Djinn’s organization-because if Cassiel cannot stop the Djinn’s apocalyptic designs, all of humanity may be destroyed.

I loved the first two books in Cassiel’s spinoff series, and I cannot wait for Unseen.

Reading Next: Bewitched and Betrayed by Lisa Shearin