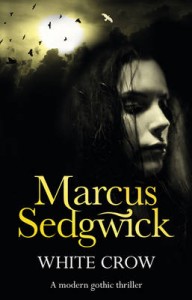 It’s summer. Rebecca is an unwilling visitor to Winterfold – taken from the buzz of London and her friends and what she thinks is the start of a promising romance. Ferelith already lives in Winterfold – it’s a place that doesn’t like to let you go, and she knows it inside out – the beach, the crumbling cliff paths, the village streets, the woods, the deserted churches and ruined graveyards, year by year being swallowed by the sea. Against her better judgement, Rebecca and Ferelith become friends, and during that long, hot, claustrophobic summer they discover more about each other and about Winterfold than either of them really want to, uncovering frightening secrets that would be best left long forgotten. Interwoven with Rebecca and Ferelith’s stories is that of the seventeenth century Rector and Dr Barrieux, master of Winterfold Hall, whose bizarre and bloody experiments into the after-life might make angels weep, and the devil crow.

Why did I read the book: I was offered a review copy and thought it was about time to try this author’s work.

Winterfold was once a thriving town with many churches, thousands of inhabitants, a grand Estate House and a harbour until the sea started to claim it over the years. Consumed by erosion, Winterfold is now a sleepy place reduced to three streets and decaying ruins. It is there that Rebecca is dragged to by her father. Away from London, friends and her boyfriend to spend the summer, in an attempt to hide for a while from the repercussions of a national scandal that has ruined his life and reputation as a policeman.

It is there that Ferelith lives: another teenage girl who is lonely, weird and definitely up to no good when she almost immediately singles Rebecca out to become her friend. The two actually strike up a friendship even though Rebecca is definitely uneasy around Ferelith although she can’t quite explain why. Ferelith who knows everything about Winterfold, its history and hidden mysteries which include the tale of a doctor and a rector and what they did at the old Winterfold Hall and that knowledge is not only unsettling but also horrific when it becomes clear just where the story is going.

But first one must speak of the narrative and how the chapters alternate between Rebecca’s (third person, present tense), Ferelith’s (first person, past tense), and journal entries dating back to the 18th century from the aforementioned rector recounting his hideous experiments with Dr Barrieux at the old Hall. Out of the three, Ferelith’s and Rebecca’s are the heart and soul of the novel: gripping, horrific even when beautiful (and vice-versa), the two combined provide the reader with a terrific gothic story. The third narrator however seems a bit of an unnecessary addition and I feel I can say this with certainty since I skimmed most of the journal entries after the first four or five. These entries not only break the action, but are also repetitive and tedious. Even though the subject they referred to was truly interesting, since Ferelith had already told this tale to Rebecca, I didn’t much see the point of the entries. This effectively means that nearly one third of the narrative was superfluous and encumbered what was otherwise a pretty good book.

And finally, in the way that the supernatural is a part of the story: from Ferelith seeing a White Crow which she takes as a sign to the motivations behind the doctor and the rector’s “research”- they have to do with death and what happens after you die and the dichotomy between good x evil and angels x demons. Their idea is even more terrifying once we learn that the author based that on a true story.

In the end, in spite of my misgivings with one part of the story (but I think they had to do more with format than actual content) White Crow provided me with a few good hours of reading till its truly, deeply, disturbing ending.

“Mother,” I said, “you are a genius; you are a poet just like Shakespeare. Like him, you have suns, planets, ants, frightening skeletons. I prefer things wich are frightening.”

I was eight years old when I said that.

Mother smiled but even as she did I could see sadder things in her eyes behind her smile.

Additional Thoughts: The video for the book is pretty cool: the author visits the place in the UK which inspired the story, talks about the book and reads a few lines from it:

Over at Kirkus: Dream Houses by Genevieve Valentine

Sookie Special: Joint Review of Dead as a Doornail