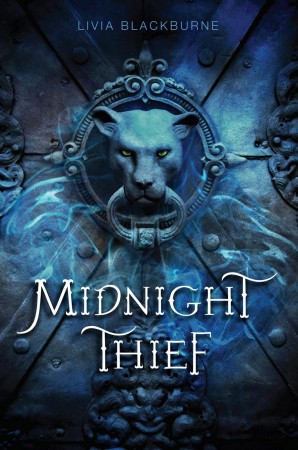 Growing up on Forge’s streets has taught Kyra how to stretch a coin. And when that’s not enough, her uncanny ability to scale walls and bypass guards helps her take what she needs.

But when the leader of the Assassins Guild offers Kyra a lucrative job, she hesitates. She knows how to get by on her own, and she’s not sure she wants to play by his rules. But he’s persistent—and darkly attractive—and Kyra can’t quite resist his pull.

Tristam of Brancel is a young Palace knight on a mission. After his best friend is brutally murdered by Demon Riders, a clan of vicious warriors who ride bloodthirsty wildcats, Tristam vows to take them down. But as his investigation deepens, he finds his efforts thwarted by a talented thief, one who sneaks past Palace defenses with uncanny ease.

When a fateful raid throws Kyra and Tristam together, the two enemies realize that their best chance at survival—and vengeance—might be to join forces. And as their loyalties are tested to the breaking point, they learn a startling secret about Kyra’s past that threatens to reshape both their lives.

How did I get this book: ARC from the publisher via Netgalley

Why did I read this book: I was in the mood for a Fantasy with a girl-thief protagonist.

Forge is a medieval-like town Rife With Poverty, where corruption is at the heart of its palace. The poor don’t have many choices, the palace guards are not exactly examples of virtue and the Assassin’s Guild is an Underground Association that fights against the Tyranny of Forger’s Powers That Be. To make Matters Worse, Demon Riders, a clan of vicious Savage Warriors who ride bloodthirsty wildcats are attacking the people of Forge.

Kyra is a Petty Thief and an Orphan who grew up in the streets of Forge. She has Uncanny Agility which allows her to climb walls and evade guards. She Makes Do with the odd job here and there and with the help of a Motherly Tavern Owner and her quasi-brother Flick, another Poor Orphan.

One day, the Assassin’s Guild show interest in Kyra because of her Remarkable Skills and make her An Offer She Can’t Refuse – because she needs to pay for the treatment of the Sickly Poor Orphan she takes care of. She needs to say yes because even though she did have money to pay for the doctor, she was conveniently robbed just as she needs to give the AG an answer. James – the Darkly Attractive leader of the Assassin’s Guild – tells her they really only need her help with a couple of missions for the Good of the People and that she will not have to be become an assassin at all. Even though she is joining the Assassin’s Guild (but I digress). Things Don’t Go As Planned and Kyra realises she has Bitten More Than She Can Chew.

Then on the Other Side we have Tristam, a Young and Dashing Palace Knight. He has undergone a Terrible Ordeal recently in which his Best Friend was killed by one of the Demon Riders. He Swears Vengeance.

Tristam and Kyra’s paths cross when she is caught by the palace guard in the middle of a mission for James. Now her life is in danger and she must decide What To Do Next. So on and so forth, things happen, we find out a Secret About Kyra (foreshadowed and predictable), Forbidden Romance, the end.

Midnight Thief: ALL THE TROPES.

The question here though is not that the book is familiar and trope-ish in itself but that nothing new is done with those tropes – quite the contrary. The plot progresses in paint-by-numbers fashion and is extremely contrived. All the plotting makes sure that Kyra is in the exact position in which she has no choice whatsoever than to do what she is told. Her lack of agency is troubling, everything happens to her and no action is initiated by Kyra’s own choice. Again, it needs to be said that the problem is not the lack of agency per se – in fact, great books take that as basis to explore that lack of choice and agency – but the fact is that it goes unremarked here.

In fairness, there is an interesting attempt to explore moral conundrums: as a city guard is Tristan complicit with the actions of the power that he serves? When Kyra joins the Assassin’s Guild does she become part of their machinations even if she never knew what exactly they were planning? The problem is that those characters are often portrayed as such forces for good that those conundrums are a moot point and fizzle out completely on their own.

Similarly, there is one specific theme that runs through the novel. Kyra ends up killing someone unwillingly and in the aftermath is plagued by nightmares and guilt. The question arises about her being a “natural” at killing which later becomes a focal point of the story when it is revealed that she is part Demon Rider. This revelation has a rippling effect all over the book: all of a sudden Kyra’s remarkable thieving skills are not really skills she developed but something that comes naturally. Those are framed in a way that just makes Kyra super special: she has all the perks (agility, strength, curative powers) of being a Demon Rider but none of the downsides because she can control herself and is not a savage bloodthirsty animal after all.

Her specialness – what makes her so different from All The Other Women is remarked several times by Tristam and James. To reinforce this idea, we are even told that she’d never have sex with James, because she is not a tavern whore. Because we all know that specialness and goodness are intrinsically connected to virginal innocence. I am so, SO ready for this trope to DIE A THOUSAND DEATHS.

As you can probably tell by now, Midnight Thief is wholly unremarkable.