Book Review: The Invisible Order – Book One: Rise of the Darklings by Paul Crilley 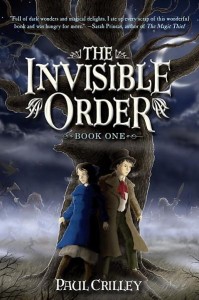 Title: The Invisible Order – Book One: Rise of the Darklings

Stand alone or series: Book 1 in the Invisible Order series

Emily Snow is twelve years old, supporting herself and her younger brother on the streets of Victorian England by selling watercress. One early winter morning on her way to buy supplies, she encounters a piskie–a small but very sarcastic fey creature that has been cornered by a group of the Black Sidhe, piskies from an opposing clan. She rescues him and unknowingly becomes involved in a war between the Seelie and the Unseelie, two opposing factions of fairies that have been battling each other throughout the long centuries of human history, with London–and England itself–as the ultimate prize.

When the Invisible Order–a centuries-old secret society of humans that has protected mankind from the fey’s interference–gets involved, things really start to get complicated.

Now she is the central figure in this ancient war that could permanently change Earth. With no one to trust, Emily must rely on her own instincts and guile to make the right choices that could save her family and all of mankind.

Why did I read this book: When we received Egmont’s catalogue, I saw this cover and went into immediate book lust. Seriously.

How did I get this book: ARC from publisher.

On the day that 12 year old Emily Snow’s adventures began, she woke up wishing for snow so she wouldn’t have to go to work but instead got a bright day and a shortcut later, a whole new life. It happened on her way to work: Emily is in the business of selling watercress for pennies is the streets of London to support herself and her younger brother William after their parents’ disappearance and they can hardly get by. Trying to get to work early that day so that she can get an extra bunch of watercress, Emily decides to take a short cut through a dark alley and witnesses a battle between tiny creatures that turn out to be fairies – creatures that SURELY should exist only in storybooks. Right?

Wrong. And now that Emily got to see them for the first time, they appear every-freaking-where and she gets caught in the middle of not only a war between fairy courts but also between Fairies and the Humans that run The Invisible Order – a secret army founded by Sir Christopher Wren to protect humans from fairies. On top of it, everybody seems to know who Emily is and they keep dropping frustratingly obscure hints about how they had been waiting for her. If that wasn’t enough, her brother William is kidnapped and in order to save him she needs to help the fairies against the Invisible Order with nothing but her wits and the help of her friend, the street urchin, self-named Spring-Heeled Jack.

Well, what a pleasant surprise this book was! I can honestly say that I was not expecting a book about-fairies- in- Victorian- London- with- a-Orphaned-Yet-Special heroine to be such a breath of fresh air. Although the premise is not exactly original, there are enough elements in here to make it a gripping adventure. This is due to: quirky details of the world building in which historical characters and institutions such as Christopher Wren and The Royal Society are important to the plot but also known fictional characters as well – like Merlin; the lovely writing which adds an authentic old-fashioned feel to the proceedings and above all, the heroine, to wit:

Emily Snow is such an amazing protagonist. It would have been easy given the premise and the setting of the novel to make Emily a Mary Sue but she is anything but. I loved how she took care of her brother and did so with love yes, but she is not a martyr, she feels anger and resentment for HAVING to do so. She is never given a choice, her parents simply disappeared one day, and it is down to Emily to work so that they have what to eat and where to stay – if she doesn’t do it, she might get separated from William and sent to the workhouse but it doesn’t come easily to her. She is constantly faced with hard decisions but she is not afraid to make them – and that includes mistakes as well. When the hints started appearing that Emily might be part of a Prophecy, I will admit to being annoyed because that is not a favourite trope. But part of what made the book such a good experience was learning how exactly did that mean and I was very pleased with the outcome – it was NOT what I expected and it made all the difference in the world and bumped the book from good to very good territory. I know I am being very cryptic but it is about agency and attitude and Emily has both by the bucket load .

Now, if Emily is a well rounded character, her companions – William, Corrigan, Jack – are less so even though they are all very likeable in their stereotypical ways. Although the villains are sufficiently villainous without being obvious: at points we don’t even know who the villains really are.

As the story progresses to its powerful climax (and I do mean, powerful, I basically whooped when it happened) a lot of plot twists are thrown in the mix, allies become enemies and vice-versa and then Emily makes the coolest yet hardest decision ever. And I LOVED her for it. Needless to say, I will be back for seconds, in fact, I am really looking forward to it.

In which Emily sees something she thought belonged in stories and runs afoul of the villainous Mr. Ravenhill.

On the day she found out about the hidden war being fought in the dreary streets of London, Emily woke up praying for snow.
She knew it was selfish, but if it snowed she wouldn’t have to work.
She wouldn’t have to trek to Farringdon in the freezing darkness and buy her penny’s worth of watercress.
Instead, she could simply crawl back into bed with her younger brother and sleep till sunup.
Emily lay shivering beneath the sheets, staring up at the shadowy black water stains on the ceiling and listening to William’s steady breathing.
Please be snowing, she thought, closing her eyes tightly.
She repeated these words to herself a few more times,then slipped out of bed and pushed aside the torn net curtain that covered the window. She wiped away the mist from her breath and stared out onto the street.
Frost winked and glittered in the moonlight, a thin layer of gleaming white that reminded her of the powdered icing on Mr. Warren’s cakes. Disappointment welled up inside her, a heavy weight in her stomach. There was no snow.
She sighed and lifted her coat from the old rocking chair, pulling it around her shoulders as she stepped over the prone bodies of the new tenants. Emily didn’t know who they were. She just knew they paid their money to Mrs. Hobbs yesterday, and the landlady had told them to sleep on the floor in the room she shared with William. That was the way of it in Cheapside. Her ma once said they were actually the lucky ones. Some landladies put fifteen people into a room. Emily had heard that when they did this, people sometimes died in their sleep. They sealed the windows to keep warm and breathed one another’s air until there was nothing left to go around.
For days after she heard this, she used to wake up and listen to make sure William was still breathing.

Rating: 7 – Very Good, with the potential to become an excellent series.

Reading Next: Bloodthirsty by Flynn Meaney