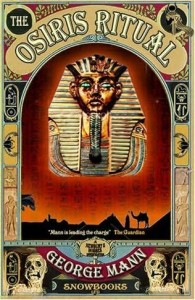 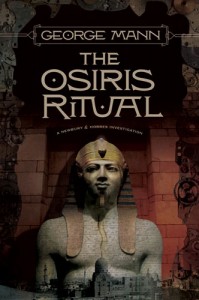 Sir Maurice Newbury, Gentleman Investigator for the Crown, imagines life will be a little quieter after his dual successes solving The Affinity Bridge affair. But he hasn’t banked on his villainous predecessor, Knox, who is hell-bent on achieving immortality, not to mention a secret agent who isn’t quite what he seems….

So continues an adventure quite unlike any other, a thrilling steampunk mystery and the second in the series of Newbury & Hobbes investigations.

Stand alone or series: Book 2 in the ongoing Newbury and Hobbes Investigation series.

Why did I read this book: I really enjoyed The Affinity Bridge, the first book in the series, and having been pleasantly surprised and delighted by Newbury and Hobbes before, I was more than happy to come back for a second serving!

Sir Maurice Newbury and Miss Veronica Hobbes have had their share of mystery and madness, but their latest cases may prove to be the toughest they have undertaken to date. On his own, Newbury attends a London soiree that promises to be a sensationalist event for the high society Londoner – the unveiling of an ancient Egyptian mummy. Though Newbury is less concerned with appearances, he is excited to see the new artifact, which proves even more fascinating than he could have hoped. The mysterious mummy has been preserved in a highly unusual manner – no name or cartouche signifying his identity on any of his sarcophagi, and the mummy itself covered in hieroglyph-inscribed linen, the skeleton beneath clearly indicating that the man had been mummified alive. After the ghastly unveiling, the unfortunate gentleman that discovered the mummy turns up murdered, and slowly anyone else tied to its appearance suffers a similarly gruesome fate. Whilst investigating the “Curse of the Screaming Mummy” (as sensationalist news writer Mr. Purefoy describes the case in the paper), Newbury also has his job as a secret agent of the Queen to complete. A former agent – presumed dead but reanimated by means of metal and clockwork, beneath his desiccated and rotting human flesh – has returned to London, and it is the Queen’s wish that he be followed and held accountable for his past acts. Meanwhile, Victoria Hobbes finds herself completely immersed in her own pursuits – first, with her sister Amelia’s increasingly failing health, and then with her own solo case. Young women all over England have been disappearing, all connected to a traveling magician and his final, dramatic “illusion.” As Victoria closes in on her suspect in the disappearances, and Newbury gains ground in his assignment to confront the rogue agent and to uncover the killer in the screaming mummy murders, all three cases appear to be inexplicably related to a madman that will stop at nothing to gain the secret to eternal youth…

The fun of the Newbury and Hobbes mysteries is twofold: first, in the dynamic between the sensible Miss Hobbes and the intelligent (yet vice-dependent) Sir Newbury; second, in the period and the action-packed plot. In The Osiris Ritual, both detectives (and secret agents) for Queen Victoria are back with a vengeance, taking on dastardly criminals, ancient rituals, and mortal peril at each turn. The romantic tension between the two protagonists is more developed in this second book, as Newbury’s emotions in particular come to a point for dear Hobbes – although neither of the pair are willing to quite express their emotions to the other any further than a general amiability. Romantic tension aside, Maurice and Veronica make an impressive team with Newbury’s keen intellectual suavity and Hobbes’ practicality – and there is a source of even greater tension in this second book as Veronica longs to tell Maurice of her role as a fellow spy under the Queen’s employ, but is specifically forbidden to do so by Queen Victoria herself. As a result, Newbury tends to think of Veronica as more…delicate than she is in reality. Of course, this secret finds its way out eventually, meaning drastic complications for the already layered relationship between these two characters.

From a writing perspective, as with The Affinity Bridge, The Osiris Ritual is eminently readable, the mystery plots handled deftly (even if they are somewhat predictable) and balanced with copious amounts of action in the form of chase scenes, fights, hostage situations, etc. These investigations are nothing if they aren’t enjoyable page-turners; in fact, they put one in the mind of “penny dreadfuls” or sensationalist, serialized novels of the period, such as Wilkie Collins’s The Woman In White. This, again, is testament to author George Mann’s skill when it comes to creating an authentic period (turn of the century London), down to mannerisms and dialogue and detailed with steampunk-ish contraptions such as zeppelins, automatons, and other steampowered devices, as well as the occasional zombie (sadly not as present here in this second book). The Osiris Ritual also generally advances the continuity arc of the series, with Maurice Newbury’s increasing addiction to narcotics (graduating from laudanum to smoked opium), the plot thread of Veronica’s sick and precognitive sister Amelia, and the mysterious involvement of a certain mastermind Doctor Fabian (who I don’t trust for a second). There are a number of intriguing secondary characters introduced in this book too, such as eager young reporter Purefoy, the rogue agent Ashbury, the occult-obsessed Doctor Knox, as well as the comforting reappearance of Scotland Yard chief Charles Bainbridge.

These praises said, I did feel that in many ways The Osiris Ritual felt like a step backward from the promise of The Affinity Bridge. Instead of taking advantage of the complexity of these two main characters – Newbury with his drug dependency, Veronica with her guilt for lying to her employer and friend and her concern for her sister – these core, character building conflicts are treated on an entirely superficial level. Instead of delving into these implications, instead, each exchange between Veronica and Maurice is very…quaint. There are countless scenes involving lips curling into grins and eyes flashing with delight, cleverness or mischief. None of this is necessarily bad, but it leaves something to be desired in the complexity department (not to mention the descriptive writing department). Also, Veronica has an annoying tendency to get herself kidnapped or otherwise injured (requiring the rescue of Sir Maurice, of course) towards the latter portions of this book, which is especially frustrating given how capable a character she actually is.

These criticisms aside, the book does end on a high note with many threads tantalizingly unresolved and some foreshadowing for a darker time ahead for my favorite two steampunk spy-detectives, especially in the relationship between the two. Overall, The Osiris Ritual is a good old fashioned fun novel. Though lacking in depth, the deficit is made up (or at least slightly overlooked) by virtue of nonstop action and a solid setting and deft plotting. For sheer entertainment value, you can’t get much better than Newbury and Hobbes.

Notable Quotes/Parts: No excerpt, but you can read a collection of free fiction from the Newbury and Hobbes universe HERE, as well as see the full timeline of these stories HERE.

Additional Thoughts: The third book in the trilogy, titled The Immorality Engine is coming out from Snowbooks in the UK this September, but won’t be hitting the USA until later next year. Here’s the skinny: 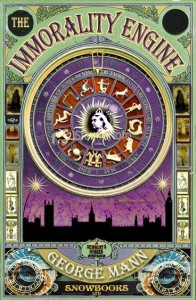 Welcome to the bizarre and dangerous world of Victorian London, a city teetering on the edge of revolution. Its people are ushering in a new era of technology, dazzled each day by new inventions. Airships soar in the skies over the city, whilst ground trains rumble through the streets and clockwork automatons are programmed to carry out menial tasks in the offices of lawyers, policemen and journalists. But beneath this shiny veneer of progress lurks a sinister side. For this is also a world where lycanthropy is a rampant disease that plagues the dirty whorehouses of Whitechapel, where poltergeist infestations create havoc in old country seats, where cadavers can rise from the dead and where nobody ever goes near the Natural History Museum. The Immorality Engine is the third in the Newbury and Hobbes series.