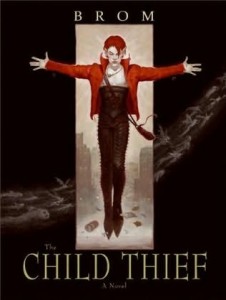 Peter is quick, daring, and full of mischief—and like all boys, he loves to play, though his games often end in blood. His eyes are sparkling gold, and when he graces you with his smile you are his friend for life, but his promised land is not Neverland.

Fourteen-year-old Nick would have been murdered by the drug dealers preying on his family had Peter not saved him. Now the irresistibly charismatic wild boy wants Nick to follow him to a secret place of great adventure, where magic is alive and you never grow old. Even though he is wary of Peter’s crazy talk of faeries and monsters, Nick agrees. After all, New York City is no longer safe for him, and what more could he possibly lose?

There is always more to lose.

Accompanying Peter to a gray and ravished island that was once a lush, enchanted paradise, Nick finds himself unwittingly recruited for a war that has raged for centuries—one where he must learn to fight or die among the “Devils,” Peter’s savage tribe of lost and stolen children.

There, Peter’s dark past is revealed: left to wolves as an infant, despised and hunted, Peter moves restlessly between the worlds of faerie and man. The Child Thief is a leader of bloodthirsty children, a brave friend, and a creature driven to do whatever he must to stop the “Flesh-eaters” and save the last, wild magic in this dying land.

Why did I read this book: The Child Thief has caught my eye in bookstores ever since last year. I haven’t seen it covered by any formal review outlets or blogs – I’d only seen the striking cover beckoning me from the bookstore. Finally, in the mood for something dark and fantastical and with the release of the (reduced price) trade paperback, I finally gave in to temptation and purchased The Child Thief.

In our modern world full of ugliness, hate and cruelty, the young often lose their innocence all too quickly – especially those impoverished, abused and neglected children. Enter a charismatic young teen named Peter, who promises these children a paradise far away, where their earthly problems cannot follow them. Instead of whisking happy young children away for marvelous adventures in a magical Neverland, Peter preys on the hopeless, the molested and the desperate, repaying their trust with deceit, leading them to a wasteland even more terrifying than the world they decided to flee. Peter’s world is dying, moreso every day, and the only way he can save Avalon and the ailing Lady that keeps his world safe is to amass an army of fierce, feral children – his “Devils” – to fight the battle to end all battles, against an old, cunning foe.

First things first: The Child Thief, a retelling of J.M. Barrie’s classic Peter Pan, is not a book for young children. This is a book with teeth – serrated, yellow, venomous teeth – with no pretense or attempts at being PG in the slightest. Peter’s “Devils” are children that have been through some of the ugliest possible scenarios – violence, rape, drug dealing, prostitution, etc. The Child Thief is violent. It is harsh. The children cuss and kill and maim; they are tortured and are killed in turn. This is harsh stuff, and certainly not for the faint of heart (or for those that wish to keep a more lighthearted version of the impish Peter and his NeverNeverland unbesmirched). What Brom does with The Child Thief is subversive and maniacal – twisting the premise of Peter Pan’s adventures and turning it into something much more primal and bleak. In this retelling, Neverland is a mist-shrouded wasteland haunted by wraiths and flesh-eating monsters of adults. Though Avalon (the name given to Peter’s Neverland in this version) was once a place of beauteous magic and splendor, as seen through Peter’s flashbacks, it has since the arrival of man – a ship full of men, to be precise – gradually begun to decay. This terrifying new view of the Peter’s world, along with Peter’s motivations for stealing children away from the human world, is harrowing stuff – and I loved every second of it.

Brom’s retelling is more of a complete reinvention of the Peter Pan myth, taking significant liberties with regards to characters, setting, and conflict. There was always an underlying feel of brutality and darkness to Barrie’s Peter Pan (at least, in this reader’s opinion), but illustrator-cum-author Brom strips away lighthearted fantasy and thrusts his version of the Lost Boys in ugly, horrific reality – this applies to Peter himself, too. A boy that is both charismatic and cruel, playful and deadly, Brom’s version of Peter feels true to Barrie’s original, but with a more savage and calculating edge. I found it incredibly clever that The Child Thief‘s protagonist is not only Peter – the book also follows Nick, Peter’s most recent recruit (or victim, depending on your perspective). Nick’s observations, his feelings of betrayal and his growing horror as he understands the situation he has been tricked into, provide a relatable counterpoint to Peter’s singleminded dedication to save Avalon and his beloved Lady. Too, I also loved that by the end of the book we do get to see the other side of the war, with The Captain (yes, that captain)’s thoughts and fears. The result is something less black and white; something more muddled and gray. As most wars are wont to be, both sides fight with the utmost conviction that they are unerringly right while the other side is undeniably wrong. In the end, this insight manages to humanize and allows readers to sympathize with Brom’s take on the notorious Captain. There are countless other characters along the way, each strong in their own right. Besides Nick’s determined honesty, there’s the hotheaded Leroy, who makes an infuriating – but oh so believable – character. My two favorites beyond Nick, Peter and Leroy were the Devil girls – Cricket (a new recruit) and Sekeu (Brom’s warrior princess version of Tiger Lily – easy target, no more).

From a holistic perspective, The Child Thief is set in a beautiful, illustrated package, written in prose that is at times poetic and at times blunt. There is no shortage of imagination in this book, from the Alba-type fey to the apocalyptic death of the land, and for the most part, The Child Thief is told in a strong voice. However, The Child Thief is somewhat lopsided, with a large amount of initial backstory, followed by a rushed final conflict. Running a tad too long in the early exposition, the dramatic climax of the book felt a bit underdeveloped. And, while most of the characters in the book are layered, complex and detailed creatures, one major character in particular lacked the same development (the spurned son, Uthger). Also, the puritanical zealots in the book’s final act felt similarly rushed and underdeveloped (as singleminded “bad guys”), and were somewhat disappointing in a book rife with complexity.

But despite these issues, I absolutely loved The Child Thief. As it stands, Brom’s very dark, very violent, and very loose retelling is my favorite re-imagining of Peter Pan. Absolutely recommended.

Notable Quotes/Parts: HarperCollins’ Browse Inside feature allows you to read the first 80 pages of The Child Thief online for free using the widget below:

Alternatively, you can read the excerpt online HERE.

Additional Thoughts: In addition to being a damn good book, The Child Thief is also gorgeously illustrated, featuring Brom’s own artwork. My favorites: 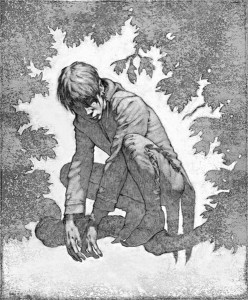 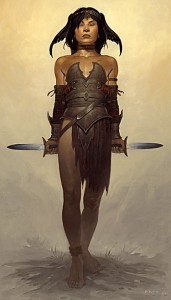 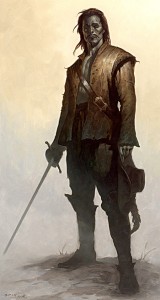 You can check out Brom’s other illustrations online HERE.

Reading Next: Ascendant by Diana Peterfreund