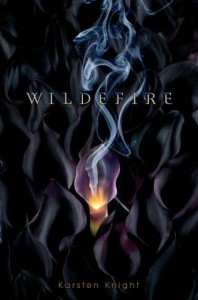 Every flame begins with a spark.

Ashline Wilde is having a rough sophomore year. She’s struggling to find her place as the only Polynesian girl in school, her boyfriend just cheated on her, and now her runaway sister, Eve, has decided to barge back into her life. When Eve’s violent behavior escalates and she does the unthinkable, Ash transfers to a remote private school nestled in California’s redwoods, hoping to put the tragedy behind her. But her fresh start at Blackwood Academy doesn’t go as planned. Just as Ash is beginning to enjoy the perks of her new school — being captain of the tennis team, a steamy romance with a hot, local park ranger — Ash discovers that a group of gods and goddesses have mysteriously enrolled at Blackwood…and she’s one of them. To make matters worse, Eve has resurfaced to haunt Ash, and she’s got some strange abilities of her own. With a war between the gods looming over campus, Ash must master the new fire smoldering within before she clashes with her sister one more time… And when warm and cold fronts collide, there’s guaranteed to be a storm.

Stand alone or series: The first book in a planned series

How did I get this book: e-ARC from GalleyGrab

Why did I read this book: MANY reasons: 1. A Polynesian main character, with the role as an incarnation of Pele! YAY! (I was born and raised in Hawaii before moving abroad, so Polynesian myth will always have a very special place in my heart); 2. A young gods storyline that isn’t solely focused on Greek/Norse/other northern/western European mythology! YAY!; 3. I am so shallow but that cover is awesome.

Hot-headed Ashline Wilde is a sophomore with an axe to grind. When she learns that her boyfriend of three months has been cheating on her, instead of confronting her lying beau, she rushes out of class and immediately throws down with Lizzie Jacobs (the girl who has been sneaking around with her man behind her back). Ash’s rage, however, is tempered when her estranged older sister Eve shows up in the school parking lot, egging Ash on to truly hurt Lizzie. For all of Ash’s bluster and anger, she knows that there’s a line she won’t cross, much to Eve’s frustration. Later that evening when Lizzie and a few of her friends sneak over to vandalize Ash’s house in bitter retribution, Eve is back in a flash and more than happy to finish the job Ash started in the school parking lot. Ash watches on in horror and tries to stop her sister, but somehow Eve is able to call the power of lightning into her hands – and kills Lizzie without a second thought, pushing Ash from the roof of their family home, and leaving her for dead.

After surviving this traumatic experience, Ashline leaves her New York home for a boarding school in a redwood forest of Northern California, eager to leave the memory of her sister behind and make a fresh start. Unfortunately for Ash, trouble has a way of following her, and at Blackwood Academy she learns that she might have more in common with her sister than she thinks. While she can’t control the weather and call down thunder and lightning like Eve, Ash’s blood runs magma-hot, and soon she and a handful of similarly gifted students find themselves in the middle of an ancient, ongoing battle of gods. With Eve hungry to bring Ash to her side – or kill her should she refuse – Ashline and her new friends must fight to protect each other and survive.

Wildefire is the debut novel from Karsten Knight, and, though not without a few missteps, a strong first foray into the world of paranormal YA fiction with an Urban Fantasy (actually, would this be “rural fantasy” technically?) twist. Ash, our intrepid heroine, is easily one of my favorite aspects of this novel. I loved how flawed and hot tempered Ash is, which not only makes sense with her godly powers (what with being a volcano goddess of fire and all), but also with her character – she’s obstinate, passionate, and quick to anger. It’s a nice change from the usual mild-mannered, do-gooder type heroines that seem to dominate the paranormal YA field. On a quick sidenote, I’ve seen lots of reviews rant about Ash’s ‘inappropriate’ violent tendencies – but in my humble opinion, I say it’s actually refreshing to see a heroine that is physically strong and prone to violence, even if she uses that to the wrong ends. It’s all part of growing up, right? (And also, newsflash – girls get into physical fights, too. I like that FINALLY a book shows that.) Beyond the wonderfully flawed main character, I also love the family drama in Wildefire. Both Ash and her older sister Eve are blood sisters, and as babies the two Polynesian girls were adopted by a rich Jewish couple from upper-crust New York. This makes for an interesting mix as both girls grow up in a white, privileged world, in which they are both seen as intruders. Eve handles her differences with anger, aggression, and eventually drops out of school and leaves her family behind – while Ash is still angry and aggressive, but loves and cares for her parents and passionate about making it through school, even if there are hiccups along the way. The relationship between Eve and Ash is a defining one for Wildefire, and the love/hate depiction is handled beautifully by Mr. Knight. They are gods, after all, and like any good family of deities, they are completely dysfunctional.

The other fantastic element that Wildefire has going for it is with its central premise, with the creation of teenage reincarnated gods from different pantheons across the globe. Instead of being solely focused on the done-to-death Greeks or Norse gods, Wildefire also features gods and goddesses from Japan, Ancient Egypt, Polynesia, Haiti, and even one from Native American myth. The diversity is fantastic and a breath of fresh air, especially in a YA paranormal genre so singlemindedly dedicated to creatures of western/northern European and lore. My only complaint is that I wish Ash (and her cohorts) had more interest in learning about her background, the gods of her pantheon, and I felt like Wildefire could have used a whole lot more in terms of exploration of these different myths. Their inclusion is great, but we never get more than a tiny glimpse of each god’s background.

On that same note, Wildefire‘s greatest weakness is that while it has fantastic ideas, a great premise, and a zippy writing style, the story itself isn’t particularly well put together. There’s a level of repetition to the writing (more on that in a bit) and there’s no real forward movement to the plot. Characters just kinda…exist until Eve does something evil, or some external character or force prompts action. Also, the big “twist” is so obviously apparent – anyone that knows anything about “the trickster” myth will know who the bad guy is. Similarly, while the characters are varied in background and powers, they all tend to sound exactly the same – each has a quippy one-liner handy, each has the same snarky sense of humor – with nothing really differentiating them beyond a few external characteristics.

Which brings me to my final issue with the book. While I love the diversity of the cast, which includes a Japanese girl, a Haitian boy, an Egyptian girl, two Polynesian girls, and a Native American boy, none of these characters ever display any other connection to their roots beyond the preliminary. It makes sense that Ash and Eve are less in touch with their background as they are adopted and left the south pacific as babies, but two of the other characters have actually grown up in their native countries – so it’s a little disappointing to see how these experiences weren’t as detailed and didn’t creep into the development of these characters. Additionally, I found it exceptionally grating to keep reading about Ash’s “earthen Polynesian skin” or “clay skin” (these exact phrases) over and over again, in lieu of an actual description. Raja is also described as having “Egyptian clay skin” (not much variation there, between the Polynesian and the Egyptian characters, eh?) – needless to say, these descriptors aren’t very good and don’t really SAY anything about the characters. I sincerely hope that there’s more interest in these characters and their varying backgrounds in future books.

Overall, Wildefire has a great premise and is a new series with bucket loads of potential. Though some of the writing quirks were frustrating, though the diversity isn’t quite nailed or fully-realized and believable in this volume, I love that Mr. Knight is writing a series with a person of color as the main character and embracing different myths and pantheons in his universe. I cannot wait to see what happens next.

Rating: 6 – Good, with the potential to get a lot better once some of the kinks are worked out in the next book.

Reading Next: Stories for Nighttime and Some for the Day by Ben Loory