Book Review: My Most Excellent Year by Steve Kluger 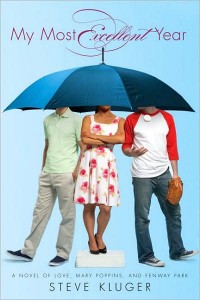 Why did I read this book: Because of this review.

I blame it on Renay. When she wrote about My Most Excellent Year she said:

it is unflinchingly, over the top, with-no-shame-whatsoever the happiest book in the world. Ain’t nothing but blue skies.

She had me at hello. And she was right too: My Most Excellent Year is an extremely happy book. Like ponies and rainbows and butterflies in a field of dreams, happy. And it has so many elements that I LOVE like the fact that it is an epistolary novel with romance and theatre and musicals and Mary Poppins and romance and kissing and I really loved it and hugged the book once I was finished and will treasure it like I treasure beautiful fairytales.

I reviewed The Ghosts of Ashbury High by Jaclyn Moriarty a couple of days ago and I talked about how much I love epistolary novels and it is funny (and most excellent) how both books follow a similar format with both being written as school assignments. In this case, three kids: Augie, Alejandra and T.C. writing about their most excellent year which was their freshmen year of high school in letter format as well as having IM convos, emails between all of the involved (including their parents), theatre reviews clippings from Augie’s mom.

T.C. addresses his letter to his late mother. She died when he was six and that when he became best friends with Augie. They became such good friends that they decided that they are in fact brothers and have been ever since. Both their families adopted each other too and T.C has a room at Augie’s and calls his parents Mom and Dad and Augie has a room at T.C.,’s and calls his dad pop. T.C.’s narrative covers his relationship with his dad, his love for baseball especially the Red Sox, and his love for his brother and his new found feelings for a girl named Alejandra. Then he befriends a small deaf kid who lives in an orphanage.

Alejandra is Mexican, daughter of an ambassador and her families have Big Plans for her but really Alejandra just wants to act and dance more than anything but she thinks her family would never allow that. She might be falling for T.C. but she thinks he is too cocky and perfect. Her letters are addressed to Jacqueline Kennedy and Alejandra is an incredibly interesting, strong-willed female character.

Augie is Chinese – American, plays soccer and loves all things about theatre. He is dramatic and loud and AWESOME, AUGIE I LOVE YOU. He addresses his letter to several Hollywood divas and when he starts to develop a crush on another boy named Andy Wexler, he realises that he is gay, a fact that doesn’t surprise anyone, not even his father who had been waiting for him to realise that so that they could talk about it. And that is quite possibly my favourite thing about the book: that there is never a “coming out” for Augie.

One day he realises he is gay, and that is it. It is ok and it is a fact that is respected by everybody. His conflict is just a regular love story – does he love me, does he not love me, more importantly, does he love me the way I am? – and it is great, you guys, and when they first kiss it is hilarious and awesome. To put things into perfective, Alejandra has a harder time coming as a theatre-lover. Part of me thought that perhaps this was too wishful thinking, that having Augie not finding any problem whatsoever at school for example is not really realistic. But then I thought about this great article that Malinda Lo wrote for John Scalzi’s Big Idea blog about her own book Ash:

That allowed me to write Ash as a fairy tale, not a coming-out story. That means that Ash only has to fall in love. When her love interest is another woman, it’s just as wonderful as it would be if she fell in love with a man.

I’m guessing that most if not all LGBT people understand that this is the true fairy tale: the idea that you could fall in love with someone of the same sex and only know the dizzying feeling of falling in love — untarnished by any of society’s disapproval. And you know what? Gay people need fairy tales, too.

I love that and that is exactly what My Most Excellent Year proposes.

But Augie’s story is only but a part of the book and there are many other things to love about it. All the theatre references including reviews by Augie’s mom in which she criticises several well loved musicals and they made me think so much and review things I never thought about. Or how the story is also about perception. There is a very telling story that is recounted by both Augie and T.C. about how one day T.C. showed up at school with his shirt inside out and then all kids did the same. For Augie it showed how much T.C. was a leader whereas T.C. thought the kids were making fun of him . All of the relationships are incredible too especially the one between Augie and T.C. and never once did I not think that they were NOT brothers. There is so much love and acceptance in this novel and about choosing who you love rather than that being determined simply by biology.

Where the novel fails slightly for me is in the relationship between T.C. and Hucky, the small kid he befriends. I mean, don’t get me wrong, it is beautiful and it certainly goes back to T.C. own childhood and how Augie helped him get through his mom’s death but there are certain aspects of that relationship that are too fantastical ( I am not going to spoil) and too much of a stretch. Plus, everybody is so perfect and nice. The kids, the parents, teachers, students, even *gasps* older brothers and although this certainly infuses the novel with a lever of heart-warmth that is hard not to succumb to it also sort of undermines the entire point of Augie’s storyline – because his fairytale is within the realm of possibility one day, but the others aren’t because as Jack Lemon once said: nobody is perfect.

Having said that, there is so much diversity and awesomeness about this book that it is really hard to be even slightly critical of it. I loved it and there is only one thing left to be said about it. My Most Excellent Year is well:

Most excellent, dudes. Approved by Bill and Ted

Notable Quotes/Parts: A letter from Augie’s father to T.C.’s father:

You know you’ve earned your wings as a father when you drop by your kid’s bedroom to kiss him good night and on your way out of the door he stops you cold with “Dad? Is love supposed to hurt?” I’m not sure if there’s an easy answer to that particular riddle (yes, I am – there isn’t), but hearing that question from my son is the reason I wanted to be a parent in the first place. How did he know?

All he really needed to hear was that he’s not the first kid who’s had to go through this. (Isn’t that usually what it takes?) by the time I came back from the bathroom with his glass of water, he was already out like a light. And while I was tucking him in, I realised that we’d never had the “I’m gay” conversation. Has this generation finally made it superfluous? If only.

Additional Thoughts: Augie has a website! It is hilarious and full of cool things to check out (and links to Ale’s and T.C.’s too).

Status: In a relationship. His name’s Andy. His eyes don’t match any color in the spectrum, so we think he invented Andy Blue.

Here for: Friends and anybody who can tell me in ten words or less WHY Alanis Morissette stopped touring. She was my entire life for three
weeks. Now I’m SO over her.

Orientation: Gay. Normally you can only go as high as a Kinsey 6, but they gave me an 8.

Body type: 5’7″ and athletic: soccer, swimming, and track
(which really means cutoffs, Speedos, and white shorts—when you got it baby, flaunt it)