It’s Austenmania! Today we do a little homage to the queen of Historical Romance herself, the indomitable Jane Austen. With a twist – both books we are reviewing take Jane Austen in the modern era, either in spirit (literally), or in form…

Title: According to Jane 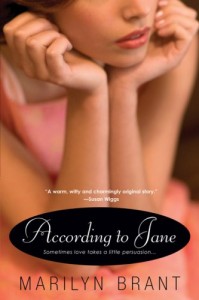 How did I get this book: ARC (from the Author)

Why did I read this book: When author Marilyn Brant offered us a copy of her new novel and cited favorites like The Jane Austen Book Club and Lost in Austen as inspirations, I simply could not refuse. Though it’s different from my usual fare, I was very excited for a change of pace.

Summary: (from amazon.com)
It begins one day in sophomore English class, just as Ellie Barnett’s teacher is assigning Jane Austen’s “Pride and Prejudice”. From nowhere comes a quiet ‘tsk’ of displeasure. The target: Sam Blaine, the cute bad boy who’s teasing Ellie mercilessly, just as he has since kindergarten. Entirely unbidden, as Jane might say, the author’s ghost has taken up residence in Ellie’s mind, and seems determined to stay there. Jane’s wise and witty advice guides Ellie through the hell of adolescence and beyond, serving as the voice she trusts, usually far more than her own. Years and boyfriends come and go – sometimes a little too quickly, sometimes not nearly fast enough. But Jane’s counsel is constant, and on the subject of Sam, quite insistent. Stay away, Jane demands. He is your Mr. Wickham. Still, everyone has something to learn about love – perhaps even Jane herself. And lately, the voice in Ellie’s head is being drowned out by another, urging her to look beyond everything she thought she knew and seek out her very own, very unexpected, happy ending.

The time is the 1980s; the location, English class. While Ellie Barnett tries (and fails) to ignore the flirtatious teasings of the gorgeous and popular Sam Blaine – who has been the bane of her existence since kindergarten as a gift from the alphabetical seating gods – her teacher passes out the next assignment: Pride and Prejudice by Jane Austen. And then, Ellie hears the voice.

Ellie has just gained a new mentor and dear friend – the ghostly voice of Jane Austen has taken up in Ellie’s mind. Over the years, Ellie searches fruitlessly for love, always with the memory of Sam Blaine in her mind, and with Jane’s advice to guide her (when she chooses to listen to it). After a string of bad relationships, of near happiness, successes and failures, Ellie struggles to make peace not only with Jane, but with her own future.

According to Jane is something of a mixed bag for me. There were elements of the story that I loved, and even with my reservations, I must admit that According to Jane is a bittersweet, entertaining book. So far as plotting is concerned (with the exception of the ending) According to Jane is a finely written piece. I loved the at times brutal, at times realistic look at the relationships that Ms. Brant casts Ellie in. I loved how the timeline would alternate from the present to memories as Ellie goes through life in the twenty or so years following her graduation. The high school storyline in particular, where Ellie’s relationships and expectations of love all begin, is the most compelling of these memories. Of the other storylines, I loved the charged, evolving relationship between Ellie and her sister Di as the both mature into people very different from their high school personalities. I also loved the voice and concept of Jane Austen herself, speaking in Ellie’s head. It’s quirky – not to mention risky, as who’s to say Ellie isn’t a complete crackpot psychopath? – but it works. Ms. Brant captures a lively, witty tone for Jane Austen’s invisible ghost, and pulls off this technique with aplomb.

Furthermore, I loved the juxtaposition of Miss Austen’s 19th century sensibilities in Ellie’s 20th/21st century world. At times (particularly in one scene involving a Victoria’s Secret bra in the locker room) Jane Austen’s ghost would provide some much needed levity, and I found myself delighted. Also, there’s Ellie herself – her inner narrative, reflective, open and honest is at times heartbreaking, and at other hilarious. I loved her “types of guys” list, in particular – every woman has dated or been attracted to at least one of the types on that list.

But then, there were aspects of the book I was not crazy about. I don’t often read Chick Lit; not because I have some stigma against the genre – I have read and loved some books under this umbrella. But there are many books and films that fall into this category that drive me completely insane. For example, I don’t like movies such as He’s Just Not That Into You or Bride Wars. The reason for this distaste is the same reason that I found myself infuriated and fed up with Ellie in this particular novel:

I abhor the stereotype where women are portrayed as marriage-crazed, baby-craving monsters.

I despise this with every fiber of my being. Do these women actually exist? And if they do, are they actually in the MAJORITY of the female population? This concept is bizarre and alien to me – perhaps I am of a different generation, with different ambitions and values. Perhaps I’m a weirdo and totally out of touch with my sex. But the point is, characters like Ellie make me want to tear out clumps of my hair and gouge out my eyeballs with my fingernails and scream myself bloody hoarse.

Ellie’s life seems so wasted, because she’s consumed for twenty-plus years with this SOLE, self-defining desire to be a wife and mommy. It’s not so much that she’s looking for true love, but the fact that she NEEDS TO BE MARRIED NOW NOW NOW! EVERYONE ELSE IS MARRIED WHY AM I ALONE!?!!! She jumps from relationship to relationship looking for that one and only end game, even when the man is clearly wrong for her, even when she knows she does not love the person she is with. There is so much pain and heartache in this book, merely because Ellie is so warped in her preconceived notions of what a “happy ending” entails. And I’ll say it again, it seems like such a phenomenal waste of time – if Ellie focused her life on being comfortable with herself and not pegging her self worth on becoming a wife and popping out babies, she might have been a much happier woman. Ellie’s lack of common sense, her inability to define herself as a person outside of a relationship is, frankly, pathetic. To some extent this was Ms. Brant’s plan with the book (to show that Ellie was so set on marriage, she was becoming Charlotte Lucas)…but the way According to Jane ended negates this message completely (it negates any other contrary message the novel would have had to send about women being obsessed with marriage for all the wrong reasons).

Don’t get me wrong – I’m glad that Ellie finally gets her happy ending, as far-fetched as it may seem, and I did finish the book with a smile. To be fair, my misgivings with According to Jane are not so much to do with Ms. Brant’s writing or plotting skills, both of which are solid. My gripe has to do with the stereotype, and expectations of female behavior in general.

And…I can’t shake that sinking feeling that According to Jane is just another example of this Crazy Marriage/Mommy Lady stereotype being perpetuated. These modern heroines (not just Ellie, but the aforementioned crazy chicks – because they are ALWAYS portrayed as scary-crazy-obsessed – from marriage-obsessed chick flicks) are completely back-asswards. They go against everything Jane Austen stood for! They lack Lizzie Bennet’s good sense, just as they lack her ability to become a strong, confident woman without needing someone else (read: a man) to make them feel that way. They lack her ability to define herself OUTSIDE of the roles of matrimony and children.

Isn’t that what Jane Austen’s most beloved heroine was all about?

I watched the taillights of Dominic’s Pontiac fade away into the distance, and I thought about our deteriorating relationship. Who I was. Who he was. Where we were going. Or not going. I’d almost broken up with him an hour before, but I’d held on. Why, why, why?

Perhaps it is because you feel lonely? Jane suggested.

And because you are about to embark on something unknown next month–your graduate studies at a new university–and you crave the familiar?

And, additionally, because you will be two-and-twenty next week and wish to celebrate it with someone dear to you?

I didn’t speak, but I nodded. I should’ve known Jane Austen would figure it out. She’d been my constant companion, my most secret friend for years. She spoke only in the silence of my mind, but she knew me as no one else could…or wanted to.

All will turn out right, Ellie, she said softly. Trust in yourself and in your instincts. You have a strong intuition about the honor and character of others. It is stronger, perhaps, than you realize, and it gains further strength with time and experience. Do not despair.

Thanks, Jane, I whispered, fighting back the despair that curled in my stomach nevertheless.

You can read the full excerpt online at Ms. Brant’s website HERE.

(And on the same rant as above – SEE!? Ellie is 22 years old. 22. And she’s already freaking out about marriage and babies at this point.)

While we’re in the Austen mood, I’d like to second Ana’s earlier recommendation of Lost in Austen (a BBC miniseries that is available in the USA now on DVD). It takes extreme liberty with Jane Austen’s Pride and Prejudice, and yet…it completely and totally works! It’s hilarious, smart, and, of course, romantic in all the right ways. 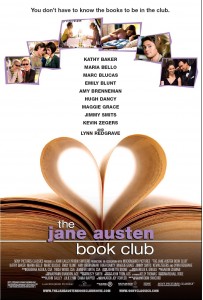 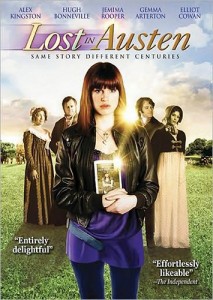 Another highly recommended flick (and book) is The Jane Austen Book Club. I never would have given this movie a shot if it weren’t for the urgings of the boyfriend (SHH!!!), but it is truly fabulous. Heartstring-tugging, refreshingly romantic in a way that isn’t condescending, and realistic. I loved it and highly recommend it.

And here are the clips to prove it! First, a deleted scene from Lost in Austen – in which Miss Amanda Price sings:

Verdict: According to Jane has many strengths, and is a solid debut effort from Ms. Brant. Unfortunately, I wasn’t able to fully enjoy this book with reckless abandon because of my own personal reading and character prejudices – but I do recommend that everyone try this novel out for themselves. Fans of Austen, and of romantic writing of the chick lit persuasion (who perhaps don’t feel so passionately about the crazy marriage lady stereotype) will not be disappointed with this alternately whimsical and serious book about growing up and finding a happily ever after. It simply was not for me.

Book Review: The Cadet of Tildor by Alex Lidell

Joint Review: Keeper of the Lost Cities by Shannon Messenger