The third – and final – book in Leckie’s trilogy is everything I was hoping for and more. 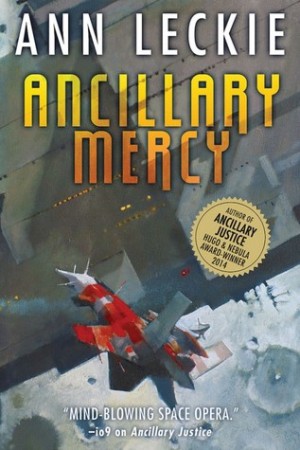 The stunning conclusion to the trilogy that began with the Hugo, Nebula, and Arthur C. Clarke award-winning Ancillary Justice.

For a moment, things seem to be under control for the soldier known as Breq. Then a search of Atheok Station’s slums turns up someone who shouldn’t exist – someone who might be an ancillary from a ship that’s been hiding beyond the empire’s reach for three thousand years. Meanwhile, a messenger from the alien and mysterious Presger empire arrives, as does Breq’s enemy, the divided and quite possibly insane Anaander Mianaai – ruler of an empire at war with itself.

Anaander is heavily armed and extremely unhappy with Breq. She could take her ship and crew and flee, but that would leave everyone at Athoek in terrible danger. Breq has a desperate plan. The odds aren’t good, but that’s never stopped her before.

Stand alone or series: Book 3 in the Ancillary trilogy.

I am dumfounded by how good Ancillary Mercy is, how perfectly it fits within the wider context of the series and how well it works as a trilogy-ender. I don’t know why I expected anything different given how much I loved, admired, and adored the first two books in the trilogy. But here we are and I can say in all honesty: this is a brilliant piece of fiction that is uplifting, complex, clever, heart-warming and fun.

I imagine every author has a crossroads moment: for Ann Leckie I would like to think that that moment came when a decision was made as to which tone to use when writing this final entry in her tale. A tale that deals with sprawling themes such as oppression, identity, colonisation, survival and revolution. And yet… instead of going Dark!Bitter!, Ann Leckie wrote a book that is funny – with moments that fully embrace its surrealist heart – and emotional.

In terms of its plot, Brek, now a Fleet Captain stationed at Atheok Station, is still dealing with questions and problems arising from the events at the end of book two. Then a couple of things happen: a person who shouldn’t be there at the Station shows herself. A new Translator from the mysterious Presger arrives. And then Anaander Mianaai decides to finally play her hand and get back at Breq.

I won’t spoil too much, or dwell too long, on what happens because I am much more interested on the why and the hows. Basically Ancillary Mercy continues to follow Breq’s tale of revenge against the Lord of the Radchaai empire that started with Ancillary Justice, then morphed – or perhaps it would be fairer to say, evolved – into a story in which she also attempts to make amends about past wrongs in Ancillary Sword. I fully realise that boiling down the scope and grandeur of these books into these two very basic elements is almost a disservice to the series (just like it’s a bloody disservice to say that this is nothing but a series that plays with the concept of gender, lol are you kidding me. Not that I am bitter about that at all) but allow me some leeway to play with it because by boiling it down to “revenge” and “making amends”, what I am doing is making it about the personal, the individual. Even when the “individual” refers to an AI who used to have multiple bodies. And thus, we have arrived to the focus and the heart of the Ancillary series and of its main character Breq, Justice of Toren.

One could argue that given the scope of some of its themes (revolution, colonisation, invasion, expansion, slavery), the final events in Ancillary Mercy are too tidy, are too small and too localised, too minimal to matter: but this, I realised upon reading Ancillary Mercy is exactly the point that the series is trying to convey.

At the end of the day, this might be a space opera in the depths of an Empire that has annexed and enslaved entire planets and also AIs in the name of civilisation but… against the backdrop of all of that, what this book is really saying is that the personal matters. Each person matters. Who you are matters. That personhood matters and that self-determination matters. And then… you put one foot in front of the other: and it’s a start. In the context of the universe, of love and death and the millions of years ahead: it is a start.

This is all the more effective because in Ancillary Mercy, more I feel, than in the other books, this has truly become an ensemble cast. Actually, in this last book we have the best thing of all: a found family. There are several passages in Ancillary Mercy that almost broke me emotionally in the best possible way. Several love stories, in different ways (“A Ship can’t love another Ship”). Picture me with heart eyes right now and you have an approximation of my mental state toward this book.

In fact, the emotional foundation of Ancillary Mercy is perhaps the most striking thing about it and I love the way it is conveyed – with subtlety, care and gentleness. A Kalr takes great care of tea sets. Someone stands next to you wiping the tears you don’t even realise you are shedding. A Ship asks a question you don’t completely understand until almost too late. Someone says something so stupid because of her privilege then has to apologise twice even when she doesn’t completely understand why because it’s not about her. People humming and singing. The point being: every minor detail proves to be not minor at all.

And then you have the ultra-surrealist moments at times of Great Crisis that were a hoot to read and I found myself simultaneously so tense that I could explode and worried about the characters but also crying from laughing so hard because of fish. And then everybody has tea. And I spent the whole book yelling SEIVARDEN YOU IDIOT CHILD. As you do.

The experience of reading this book, this series, is unique. I love it so much I do not know what I will do with myself now that it’s all over. I guess one foot after the other, etc. Fare thee well, Breq, Justice of Toren.

Rating: What else could it be? 10, of course – the first time I give a ten to all the books in a series.