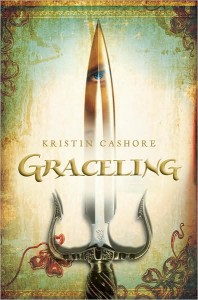 Stand alone or series: Can be read as a stand alone novel, but has a forthcoming prequel-ish companion book, titled Fire due out October 2009.

Why did I read this book: I’ve actually had Graceling on my TBR shelf since its release last year! After doing a conversational style discussion/review of The Hunger Games by Suzanne Collins with Christine of The Happily Ever After, we planned on doing a similar review for Graceling. Unfortunately, the timing never really worked out for us (I had to cancel, then she had to cancel, etc), and so the book languished on my shelf for a few months. When I went to visit my family this month it was the perfect opportunity to finally dive into Graceling, so I dusted it off and got crackin’.

Summary: (from amazon.com)
Katsa has been able to kill a man with her bare hands since she was eight–she’s a Graceling, one of the rare people in her land born with an extreme skill. As niece of the king, she should be able to live a life of privilege, but Graced as she is with killing, she is forced to work as the king’s thug.

With elegant, evocative prose and a cast of unforgettable characters, debut author Kristin Cashore creates a mesmerizing world, a death-defying adventure, and a heart-racing romance that will consume you, hold you captive, and leave you wanting more.

On a quiet night, a masked figure silently glides through a castle’s dungeons and rushes to rescue a hostage prisoner. Lady Katsa, the mysterious figure, makes quick work of the guards, effortlessly incapacitating them with her unmatched skill. In Katsa’s world, certain humans are “Graced” — gifted (or cursed, in Katsa’s case) with an extraordinary power, and are so identified by their mismatched eyes. Graces range from mundane, such as an unparalleled skill at knitting, to lethal. Lady Katsa’s particular Grace is perhaps the most dangerous of them all, as she is Graced with Death. An unmatched fighter, tireless, and possessing both speed and strength, Katsa is legend and universally feared throughout the seven kingdoms, regarded as a thug sent out to do her ruthless Uncle, King Randa’s bidding. However, as Katsa grows into a young woman, she can no longer suppress her conscience and continue to carry out her Uncle’s dirty work. With the help of a few of the loyal men in Randa’s guard, Katsa creates a secret council; they do not wish to overthrow the king, but instead to maintain peace and to keep the best interests of the kingdom in mind. It is this council that has led Katsa to King Murgon’s dungeons on a midnight rescue mission of an elderly Lienid man, and an encounter which will change Katsa’s young life.

During her covert jailbreak, Katsa meets a young man with hand-to-hand fighting skills more closely matched to hers than any other person she has ever met. This Graced young man, whom Katsa still manages to evade easily enough for all his skill, is none other than Lienid Prince Po — and he soon shows up at Randa’s court, looking for his missing Grandfather. Together, Katsa and Po uncover a terrible plot for control of the seven kingdoms and rush to face a foe that even Katsa’s Grace cannot stop. And, along the way, Katsa and Po discover themselves in the process.

Graceling is a wonderful debut novel, instantly captivating and compulsively readable. From the opening pages with the daring, action filled rescue/jailbreak, I found myself completely immersed in the story and unable to put the book down. Ms. Cashore manages to imbue enough action to snag even the most reluctant reader’s attention, but her true grace (hehe, excuse the puns) is in her interesting premise, and her vivid characterizations. In terms of the premise, I loved the idea of “Graces” and how extraordinary skill did not necessarily mean that every grace was some incredible superpower (that episode of Family Guy when the Griffins get exposed to nuclear waste and develop different superpowers — telekinesis, super strength, super speed, shape shifting, and poor Meg Griffin’s ability to make her nails grow longer or shorter on demand). Despite their namesakes, Graces are not exactly ‘gifts’ and are portrayed as burdens to certain characters, especially in the two leads with Katsa’s ability to kill, and Po’s fighting skill. Indeed, even these two graces are not all they seem — a grace presents itself at different times for different people, the different shaded eyes being the only early indicator that a child is graced. In the case of Katsa and Po, both learn a great deal about their respective graces even as the story progresses and they are very near adulthood. This uncertainty leaves a lot of room for interesting developments during the course of the novel — from character revelations to major plot points.

The characters in Graceling are the highlight of the book for me, especially with the wonderful heroine Katsa. Protagonist and narrator, Katsa undergoes a lot of soul searching in this book — she grapples with her grace, which she views as a burden. Everyone in Randa’s kingdom sees her as a monster for the deeds she must do for her Uncle, and she begins to believe that she actually is a monster because of her deadly skills. Throughout the novel, Katsa tries to break free from under her Uncle’s control and, more importantly, she tries to shed her own fears and self-loathing. With Po, Katsa begins to believe in herself more — but that’s not to say she derives her self-worth from her love interest as so many young adult novels are wont to do. No, Katsa is a fiercely independent woman and in fact refuses marriage, comfort and security a number of times during this novel, taking a standard trope and turning it on its head. This is perhaps what I loved the most about this novel and the message it portrays — far too many young adult or romantic slant novels use the golden idealization of marriage as a way to solve the intrepid, pretty young heroine’s problems. In Graceling, both Katsa and Po understand each other and fall in love, without needing to end up at the altar and live happily ever after. For this, I can only say, bravo and thank you, Ms. Cashore.

While Katsa’s inner struggles really drive this novel, Po’s character is also beautifully drawn. Guarding a secret and fighting an internal battle of his own, I loved the interactions and the blossoming relationship between these two leads. While Po is more closely matched to Katsa’s physical prowess than anyone she has ever met before, Katsa still remains the dominant, incredibly strong and powerful one of the two. Po, for all his talents, is more “beta” than “alpha” — again, a nice difference from the norm.

Just as the characters are wonderfully fleshed out, so too is the overall plot and central conflict to Graceling. There are some interesting twists and unpredictable plot points throughout the novel, and all I will say (for fear of spoiling) is that the villainous character, and the ultimate fate of Katsa, Po and young Bitterblue is splendidly, deftly plotted. As I have mentioned above, I couldn’t put this book down — testament to Ms. Cashore’s clean and engaging writing.

Problems? Not too many in my opinion. The secondary character of young Bitterblue was wonderful, but she sounded a lot older than the seven year old she was supposed to be. The worldbuilding, besides the intriguing concept of Graces, was good, but somewhat standard. Although this is easily overlooked since the strength of Graceling is in the character dynamics and nuances. I did wish there was more to the resolution of conflict, and that the final showdown was drawn out a bit more…but I loved how the novel ended. Ms. Cashore makes sure that there are consequences in this book, taking the risk to end things on something less than storybook perfection — which is infinitely more appealing to me as a reader.

Graceling is still a simple and straightforward enough novel so that it will appeal to its young adult target audience, but complicated enough to appeal to older readers too. This is a book that is very hard to put down, and I absolutely cannot wait for sequel.

She had killed once by accident, a memory she held close to her consciousness. It was how her Grace had announced its nature, a decade ago. She’d been a child, barely eight years old. A man who was some sort of distant cousin had visited the court. She hadn’t liked him – his heavy perfume, the way he leered at the girls who served him, the way his leer followed them around the room, the way he touched them when he thought no one was watching. When he’d started to pay Katsa some attention, she had grown wary. “Such a pretty little one,” he’d said. “Graceling eyes can be so very unattractive. But you, lucky girl, look better for it. What is your Grace, my sweetness? Storytelling? Mind reading? I know. You’re a dancer.”

Katsa hadn’t known what her Grace was. Some Graces took longer than others to surface. But even if she had known, she wouldn’t have cared to discuss it with this cousin. She’d scowled at the man and turned away. But then his hand had slid toward her leg, and her hand had flown out and smashed him in the face. So hard and so fast that she’d pushed the bones of his nose into his brain.

Ladies in the court had screamed; one had fainted. When they’d lifted him from the pool of blood on the floor and he’d turned out to be dead, the court had grown silent, backed away. Frightened eyes – not just those of the ladies now, but those of the soldiers, the sworded underlords – all directed at her. It was fine to eat the meals of the king’s chef, who was Graced with cooking, or send their horses to the king’s Graced horse doctor. But a girl Graced with killing? This one was not safe.

Additional Thoughts: Author Kristin Cashore has posted the cover and blurb for book 2 in this planned trilogy, entitled Fire. 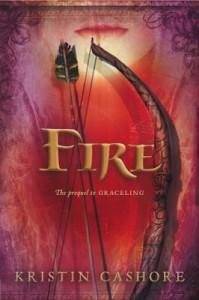 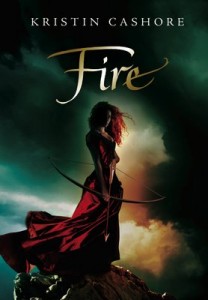 Fire, Graceling’s prequel-ish companion book, takes place across the mountains to the east of the seven kingdoms, in a rocky, war-torn land called the Dells.

Beautiful creatures called monsters live in the Dells. Monsters have the shape of normal animals: mountain lions, dragonflies, horses, fish. But the hair or scales or feathers of monsters are gorgeously colored– fuchsia, turquoise, sparkly bronze, iridescent green– and their minds have the power to control the minds of humans.

Seventeen-year-old Fire is the last remaining human-shaped monster in the Dells. Gorgeously monstrous in body and mind but with a human appreciation of right and wrong, she is hated and mistrusted by just about everyone, and this book is her story.

Wondering what makes it a companion book/prequel? Fire takes place 30-some years before Graceling and has one cross-over character with Graceling, a small boy with strange two-colored eyes who comes from no-one-knows-where, and who has a peculiar ability that Graceling readers will find familiar and disturbing…

Fire comes out in October 2009 from Dial Books for Young Readers (in the U.S. and Canada) and Gollancz (in the U.K., Australia, and New Zealand), and its list of foreign publishers is growing.

Verdict: I truly enjoyed reading Graceling for its intriguing premise, its strong characters, and its highly engaging plot. Highly recommended for readers of all ages.