“As the girls chased her elegant silver-haired bun through Valor’s princely blue arches and murals, they gawked at the once virile visions of princes destroying demons and saving helpless princesses, now flaunting different endings: Snow White smashing out of her glass coffin with her fists, Red Riding Hood slitting the wolf’s throat, Sleeping Beauty setting her spindle on fire… The red-blooded princes, hunters, men who rescued them, who saved their lives… gone.”

Title: A World Without Princes 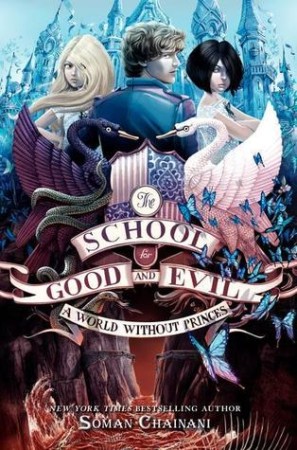 In the epic sequel to the New York Times bestselling novel, The School for Good and Evil, Sophie and Agatha are home, living out their Ever After. But life isn’t quite the fairy tale they expected.

When Agatha secretly wishes she’d chosen a different happy ending, she reopens the gates to the School for Good and Evil. But the world she and Sophie once knew has changed.

Witches and princesses, warlocks and princes are no longer enemies. New bonds are forming; old bonds are being shattered. But underneath this uneasy arrangement, a war is brewing and a dangerous enemy rises. As Agatha and Sophie battle to restore peace, an unexpected threat could destroy everything, and everyone, they love—and this time, it comes from within.

Soman Chainani has created a spectacular world that Newbery Medal-winning author Ann M. Martin calls, “a fairy tale like no other, complete with romance, magic, and humor that will keep you turning pages until the end.”

Stand alone or series: Book 2 in the School for Good and Evil trilogy

Why did I read this book: I recently read The School for Good and Evil for my 2014 Smugglivus Feats of Strength – and I loved it. In fact, I was kicking myself for not reading the book sooner. Thus, when I saw that book 3 is due out shortly and book 2 was published last year, I jumped on the bandwagon with alacrity.

WARNING: This review contains mild, unavoidable spoilers for book 1 in the series. If you have not read THE SCHOOL FOR GOOD AND EVIL and wish to remain unspoiled, you might want to look away.

And they all lived happily ever after.

At the dramatic conclusion of The School for Good and Evil, best friends Sophie and Agatha defeat the insidious School Master and break free of the shackles of “Good” and “Evil.” Instead of kissing her Prince, Agatha uses the magic of true love’s kiss to bestow on her beloved best friend, Sophie – thus sending the girls back to their woodland home, freeing them from their fairy tale, and ensuring that the duo would live Happily Ever After together forever.

Except… that doesn’t quite happen. After a few months of being home, things start to settle down in the girls’ village. Sophie – ever dramatic and hungry for attention – tries to ratchet up her and Agatha’s profiles by putting on plays, promising kisses and autographs, and so on, but always at her core knows that as long as she has her best friend by her side, she can do anything. Meanwhile, Agatha thinks she just wants things to go back to the way they used to be…or does she? After being accepted, even desired and loved, Agatha’s return to the strange girl in the graveyard perhaps isn’t the happy ending she’s always wanted. And, in a moment of stress, Agatha makes a secret wish for Tedros, the prince she left behind at the School for Good and Evil.

In that moment, everything changes.

Assassins and angry elders hunt Sophie down with murderous intent, and the two best friends find themselves whisked back to the fairy tale realm where magic is real – and everything has changed again. Instead of a realm of Good and Evil, Agatha and Sophie’s happy ending has changed the story realm forever. Now, there is a school for Girls – a world without princes – and an exiled tower wasteland for Boys. Girls, both Ever and Never, are shown that they can rescue themselves from their own fairytales and don’t need a prince to make their own Happy Endings – but at the same extreme, the new Dean of school insists that all boys are boorish, undisciplined, horrendous brutes that deserve enslavement. Meanwhile, the exiled boys, both Ever and Never alike, rail against the new world order and vow to kill Sophie so that Agatha can kiss her prince Tedros – and restore the world to the way it should be.

Agatha is torn between her heart and her best friend, confused by the stirrings in her heart for acceptance and love, but loyalty to Sophie. Meanwhile Sophie – who, for the first time has been chosen as a friend and understands love for someone else – is desperate to do whatever it takes to keep her friend, no matter what it takes.

Oh, A World Without Princes. You were not at all what I expected. I recently read and loved The School for Good and Evil because of its clever use and slight subversion of Disney-esque fairy tale tropes–prodding, for example, at the connection between appearance and predisposition to good or evil, or questioning the notion that a Prince and Princess must end up together in order for there to be a true happy ending. In contrast, this second novel questions what happens after the storybook closes, when all is said and done and everyone is supposed to live happily ever after. Departing from The School for Good and Evil, A World Without Princes poses new thematic and character development questions – instead of focused on the nature of “Good” and “Evil”, this second novel questions/satirizes/provokes the often sexist and reductive stereotypes associated with girls and boys. On this note, I feel like I should point out that the book at first appears to adhere to heteronormative relationships and assumes there are only girls or boys, and no room for any other interpretations of gender and relationships – but there are characters, such as the gnome Yuba or “Filip” or “Yara”, who actively challenge and question this assumption. (Gnomes, as it turns out, can change from male to female at will as younglings – a very important ability that plays a pivotal role in this book.)

Suffice it to say, there are subversions aplenty in this second novel – and although I’m not convinced that Chainani successfully pulls off or examines these gender roles and expectations, I appreciate that this second novel provokes important questions (especially of young readers).

But beyond thematic and conceptual strength, A World Without Princes succeeds because of its easy, fast-paced and adventurous storytelling, and because of the strength of its characters. As with the prior novel, Chainani balances action with cinematic storytelling, complete with magical embellishments, dramatic backstory, and the highest of stakes. There are classes and school challenges, but with a war brewing and the future of every boy and girl in storyland at stake, this second book is far more grim than its successor.

On the character front, while book 1 was more or less equal between both main girls, A World Without Princes is undoubtedly Sophie’s tale. Spoiled, beautiful, selfish Sophie, who grows to realize her love for her best friend, who hurts and yearns and does anything she can to keep that love in her life. In contrast, Agatha’s character seems a little dimmer in this novel, though her choices are every bit as heartbreaking – I love that Agatha takes stock of her choices, especially at the end of this book, and that there are no easy solutions given to our two heroines (who do clearly, dearly love one another more than anything or anyone else). Supporting cast members are in full-flourish here, too, from the heartbroken Tedros (who is given more in the way of character development than the first book), to the vindictive Hester (demon tattoo wielding badass that she is).

Perhaps what is best about A World Without Princes, however, is the fact that it is so open to interpretation. Rich with imagination and the power of choice, I loved that there is no simple solution to this book – and that dramatic ending has me hungry for more.

I cannot wait to read the third and final volume, The Last Ever After, very soon.

Notable Quotes/Parts: You can read an excerpt online HERE or by using the viewer below.

Book Review: The Gentleman’s Guide to Vice and Virtue by Mackenzi Lee