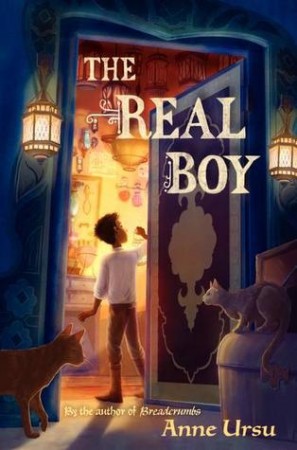 On an island on the edge of an immense sea there is a city, a forest, and a boy. The city is called Asteri, a perfect city that was saved by the magic woven into its walls from a devastating plague that swept through the world over a hundred years before. The forest is called the Barrow, a vast wood of ancient trees that encircles the city and feeds the earth with magic. And the boy is called Oscar, a shop boy for the most powerful magician in the Barrow. Oscar spends his days in a small room in the dark cellar of his master’s shop, grinding herbs and dreaming of the wizards who once lived on the island generations ago. Oscar’s world is small, but he likes it that way. The real world is vast, strange, and unpredictable. And Oscar does not quite fit in it.

But it’s been a long time since anyone who could call himself a wizard walked the world, and now that world is changing. Children in the city are falling ill, and something sinister lurks in the forest. Oscar has long been content to stay in his small room in the cellar, comforted in the knowledge that the magic that flows from the trees will keep his island safe. Now, even magic may not be enough to save it.

How did we get this book: e-ARC from the publisher

Why did we read this book: We both have read and loved Anne Ursu’s Breadcrumbs (Thea’s initial review, Ana’s What She Said review) – an elegiac, beautiful middle grade novel with fantasy overtones. Of course we were going to read this new book.

Once upon a time, there was an island at the edge of the world called Aletheia. And Aletheia was blessed with magic, and its people prospered because of it.

One day, a great plague came over the world, sweeping through the continent and broaching the Aletheia’s shores. But thanks to the blessing of magic and the strength and wisdom of the isle wizards, people within the protective tree walls of the great city of Asteri remained impervious to the plague and survived. Now, generations later, Aletheia is the only place with magic in the entire world – even though the wizards have gone, and magic is not what it once was. Still, there are magicians with gifts enough to make the island prosper, and the greatest of all the magicians is Master Caleb.

It is here that our story begins, with a young boy named Oscar. An orphan taken in by the great magician Caleb, Oscar is a shophand and errand boy whose entire world comprises a dark cellar and back storeroom. Quiet, orderly, and routine, Oscar is comfortable with his small life – even with the taunts he suffers from Caleb’s magician apprentice, Wolf – as long as Oscar has his herbs, and his covert reading of books, and his many cats. But one day all of that changes, when Caleb and Wolf leave, and Oscar is given the impossible task of manning the front of the shop. Oscar has never been comfortable with other people, you see, and always feels as though he doesn’t fit with the rest of the world. Things are worse when demanding, desperate patrons start pouring in from the city. Children – blessed, magical city children – are getting impossibly, irreparably sick. A great hungry monster has awakened in Aletheia, threatening to destroy all that Oscar knows and loves. Without any magicians to help, it is up to Oscar and his new friend, the apprentice healer Callie, to figure out and stop whatever terrible force is besieging Asteri.

Oh my goodness, I loved this book. I admit to being a little nervous when I started The Real Boy because of how much I loved Breadcrumbs (talk about a tough act to follow). That said, I needn’t have worried: Anne Ursu has very quickly become an author I completely admire and trust, whose books I will automatically purchase without a second thought because of her beautiful prose and the poignant messages in her fantastical novels. Like Breadcrumbs, The Real Boy is a book that resonates very deeply (I still think that Breadcrumbs speaks more to me, personally, but I think they are both equally important and beautiful books).

In The Real Boy, Ursu tells the story of a land that falls victim to its own greed and willful ignorance. It’s the story of history altered and ignored, of the good and the bad that comes with magic, and of the two children brave and strong enough to stand for what is right, no matter how terrible the cost. I love the worldbuilding aspect of this book, the history of Aletheia and the horrific truths that Oscar and Callie uncover because it rings as entirely genuine. As the saying goes, history is written by the victors; the comfort of a sweet lie is often easier than recounting the cold, hard truth. This is certainly true of Oscar and Callie’s world, as they (and we, the audience) learn the truth of the great plague, the last wizards, and the founding of the city of Asteri. These truths are built up to in a tantalizing mounting of tension, tempered with Ursu’s beautiful prose – while I wish I could have seen more of the world outside of the island, glimpsed more of the plans of Caleb on the continent (or the new Duke, or the fate of young Wolf, for that matter), the picture that Ursu paints of Aletheia is one of depth and glorious atmospheric detail. I appreciate this very much.

But more than all of the beautifully wrought writing, worldbuilding and setting, most of all I loved Oscar. The protagonist of this book, Oscar is a boy that feels like he doesn’t quite fit in his world. He doesn’t understand the emotional cues that come so easily to others, nor does he feel comfortable with all the noise and bustle and demanding questions of others. When I started reading The Real Boy, my immediate thought was that Oscar displayed the characteristics of high-functioning autism – but I wasn’t sure if that was, actually, intentional (I know now that it was). There’s a revelation that comes halfway through the book which made me initially uncomfortable; but then a different, brilliant revelation that turns around everything you thought you knew about Oscar that comes later. I don’t want to spoil anything, but suffice it to say the way that Ursu treats her protagonist – with the utmost love, care, and respect – speaks volumes. Oscar might be overwhelmed by the world he faces every day, but he is brave, and strong, and kind. It is Oscar that is the hero of this tale, who discovers the truth of the plague that haunts his home, who understands what must be done to save the things he loves so dearly. And my goodness, I loved Oscar so very much.

After reading the book, I saw this heartfelt post from author Anne Ursu on Oscar (from her blog tour post at Read Write Reflect), which sums it up perfectly:

And this, friends, is exactly what The Real Boy accomplishes – and one of the reasons why I loved the book so very dearly.

I have been hearing nothing but high praise for The Real Boy from reviewers I specially trust when it comes to good Middle Grade reads. Everybody is right: this was an amazing book. And it’s funny because just like Thea, I loved Breadcrumbs but The Real Boy? Truly, deeply resonated with me. It may well be my favourite Middle Grade book of 2013.

The Real Boy is a book that combines perfectly the macro and the micro: the larger world-building that affects all characters as well as its protagonist Oscar’s deeply moving personal story. The brilliant way that Anne Ursu weaves these threads makes it so that one doesn’t exist without the other.

There is a mystery at the heart of The Real Boy but its true depth is not revealed up until the very end. By then a myriad of twists have happened, preconceptions have been turned upside down and most of them are revelatory of the countless ways that people react to and build their own history, their own stories, and their own sense of self. In many ways The Real Boy is a very human tale with roots on fear and power but also on love and affection.

Resembling Breadcrumbs there is a fairytale element to this story as well: the prose is beautifully crafted to evoke those stories and there is a cautionary tale at its core: it is a powerful story about the toll of making life-altering decisions, about making sacrifices and one that examines the hubris of using and relying on magic as though that can be done without creating monsters – literally and figuratively.

All of this is all very well and good but the real heart of The Real Boy is the protagonist Oscar. Oscar who doesn’t understand people, who doesn’t understand emotional cues and who has built his own comforting routine around the things that he does understand. My reading of the character is similar to Thea’s (i.e. that Oscar shows characteristics of high-functioning autism) and once this become more and more clear to me, I was really appreciative of the way that the author developed his story with carefulness and sensitivity.

The Real Boy also made me think of the ways that we build our own identity: what does it mean to be human? To think? To interact with people? How do we deal with external expectations and with the things that others repeatedly say about you? More specifically, how can a child deal with that? It is so clear how difficult it is not to internalise those expectations and disparaging commentary. If all you hear about yourself is that you are only good for “x” that’s how you start to believe that’s all you are good for. And it is so easy to extrapolate this and examine this idea in a wider context, connecting it to the “real world”. Not that the book has any shred of didacticism to it.

All of this and I didn’t even mention how the characters are all PoC and that is not even a thing in the book or the amazing, beautiful artwork.

It’s a brilliant one. Totally recommended.

Notable Quotes/Parts: We posted an excerpt of the book today. Go HERE to read.