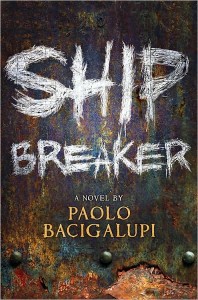 In America’s Gulf Coast region, where grounded oil tankers are being broken down for parts, Nailer, a teenage boy, works the light crew, scavenging for copper wiring just to make quota–and hopefully live to see another day. But when, by luck or chance, he discovers an exquisite clipper ship beached during a recent hurricane, Nailer faces the most important decision of his life: Strip the ship for all it’s worth or rescue its lone survivor, a beautiful and wealthy girl who could lead him to a better life. . . .

Stand alone or series: Can be read as a stand alone novel, but there is room for more (my fingers are crossed!)

Why did I read this book: Paolo Bacigalupi is the new “it boy” of the speculative fiction realm. His Pump Six and Other Stories and his debut novel The Windup Girl have been praised to the high heavens, earning tons of nominations and accolades for some very prestigious awards. While I truly liked The Windup Girl, to me, it felt like a unnecessarily protracted short story, and while Mr. Bacigalupi obviously has serious writerly chops, I wasn’t completely blown away by his work. This meant that Ship Breaker was all the more important in my mind. Would Mr. Bacigalupi live up to the hype? How would he handle a young adult novel? One glance at the premise, and I was instantly hooked, if feeling a bit anxious…

In the shallows of the Gulf Coast, marooned freight ships are strewn along the beach, wrecked on the remains of a drowned city. Every day, Nailer scrambles through the wreckage as a member of the “light crew,” searching for salvage – copper wire, scrap metal, or the luckiest strike of them all, forgotten reservoirs of oil. Life on Bright Sands Beach is brutal and unforgiving, even for young teens like Nailer. Everyone has a quota to meet, and everyone follows the same cutthroat rules. There’s crew, there’s “family” (though, in Nailer’s case, his amphetamine hopped up, violent, abusive father is someone he’d rather avoid), and there are the Fates. In the cruel world of the ship breakers, the only religion is that of chance – you can be as smart as ever, but you’re either lucky, or you’re dead.

Nailer is among the smart and lucky – shortly after discovering a reservoir of oil (nearly drowning in it), a severe hurricane known as a “City Killer” runs through the Gulf, bringing with it a sleek, shipwrecked Clipper. Nailer and crewmate Pima stumble across the hidden beached boat to discover riches beyond their imagining inside – silverware, stores of food, luxurious furnishings. But they also make a more troublesome discovery – a beautiful teenage girl, who still happens to be alive. Though it goes against everything he’s known and the advice of his friend Pima, Nailer saves the mysterious “Swank” girl’s life and places his own gamble with the Fates. When Nailer’s father discovers the wreckage and Nailer hiding its surviving passenger, the stakes are raised even higher. For Nailer, the girl Nita could mean his ticket out of the unrelenting life of ship breaking – but with his own father eager to extort as much as he can from the swank, helping Nita could also mean Nailer’s end.

Ship Breaker, Paolo Bacigalupi’s second novel and his first for Young Adults, is, in a word, incredible. I loved Ship Breaker. I’m talking, hugging the book to my chest, knocked my socks off loved it. THIS is what I wanted so badly from The Windup Girl – this feeling of tension, desperation, and ultimately of triumph. Much more than a protracted short story, Ship Breaker is a complete, contained story in itself (although there is room for a sequel, should Mr. Bacigalupi choose to return to Nailer’s world). I can see you skeptical, hard-core speculative fiction fans out there shaking your heads, making arguments like, “But Ship Breaker is a young adult novel. How could it possibly compare to the gritty awesomeness of Bacigalupi’s other work?”

To which I say, HOGWASH.

Yes, this is marketed as a young adult novel – but don’t ever mistake “young adult” as synonymous with “juvenile” or assume that because its written for a younger target audience that it pulls its punches. Believe me when I say that Nailer’s world is one of darkness, of stark, painful, cold reality. Nailer’s is a terrifying post-apocalyptic world – a world ravaged by climate change, extreme poverty, in a post-oil era. As with Mr. Bacigalupi’s other works to date, the worldbuilding for Ship Breaker is positively superb, and all the more horrifying for how very plausible it seems. In the Gulf Coast, the seas have risen and reclaimed coastal cities to their depths. Weather has become extreme, spawning level 7 hurricanes capable of knocking out entire landscapes. The divide between the haves and have-nots (the “Beach Rats” and the “Swanks”) has grown to an insurmountable chasm. All this is certainly familiar – if not in developed countries, it sure as hell is a reality in third world countries already (take it from someone that grew up in Jakarta, Indonesia – the divide between the wealthy and poor is a grim reality). Trade is done not only in scrap metal and salvaged wrecks, but also in flesh and blood – organs, body parts, eggs and sperm sold to gene modifiers.

More than just painting a stunning if grim world, however, Ship Breaker is such a wonderful book because of its plotting and its characters. Unlike The Windup Girl, Ship Breaker has a direction and a purpose, and it is told in no-nonsense fashion. There is no lack of action in this novel, which works to its credit. Ship Breaker is very much an ‘at-sea’ book, a pirate story. True, these pirates aren’t those genial, Disney crews of the Caribbean, and they don’t have eye-patches, parrots or peg legs. Rather, these crews are made of tattooed brutes, ruthless killers and genetically modified “half-men.” As Nailer and Nita (the surviving “swank” rich girl) make their way to reconnect with Nita’s fleet, they have to jump trains, brave storms, and stay out of reach of Nailer’s deranged, obsessed, murderous father. It’s one hell of a ride, and I, for one, was transfixed.

Just as the plotting is superb, so too are the characters. Nailer is a great protagonist, scrawny, wiry boy that he is, he worms his way into your heart. The poor kid goes through a LOT in this book, handling each challenge and tough choice admirably – but he’s not annoyingly infallible. I love that for each of Nailer’s choices, we get to actually see and understand his thought process. The other main character is Nita, the shipwrecked survivor. She too is believable, genuine as a character. Though we are not privy to her thoughts as we are with Nailer, which creates a bit of distance from Nita, readers do get an appreciation for Nita’s mettle. She’s a rich, spoiled brat, entitled and ignorant of the ways of practical life – but she’s also not annoying or one-note. Nita grows as a character, proving herself to Nailer (and by extension, to us as readers) that she is more than just so much rich baggage.

And while we’re on characters (as it has been mentioned in other excellent reviews and bodes mentioning again), the cast of Ship Breaker is subtlely, refreshingly diverse – and that the equivocation of White with wealth is no longer an automatic assumption (in fact, the richest character in this world that we know of is of Indian descent). I also have to say that I LOVED the concept of “Half-men” – the character of Tool was fascinating, and I wanted to hear more from him. More than just liking the character, I loved the triumph of choice here, as we see with Nailer choosing to save a swank he doesn’t know and by his own upbringing should probably kill without a second thought (not because he’s some superior moral creature, but because of his experiences and circumstances), and with Tool choosing to do what he does (which I totally won’t spoil).

One final, short note about characters without spoilers – Nailer’s father scares the bejeezus out of me.

For these reasons and for so many more, I loved Ship Breaker. A grimy, polluted, climate change dystopia, yes, but it’s also a book with characters that come to life, and a plot that makes you want to keep reading at all costs. I loved it. Ship Breaker may just be one of my top 10 reads of the year so far.

For more, check out the book’s ning site HERE.

Verdict: I loved it. A harrowing, cautionary tale of a future ravaged by greed and environmental catastrophe, Ship Breaker also is a poignant story about a boy growing up and finding his place in a broken world. Absolutely recommended, to readers of all ages.

Book Review: About a Girl by Sarah McCarry