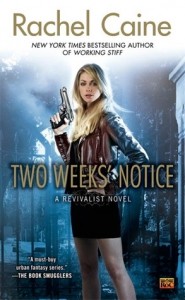 After dying and being revived with the experimental drug Returne, Bryn Davis is theoretically free to live her unlife—with regular doses to keep her going. But Bryn knows that the government has every intention of keeping a tight lid on Pharmadene’s life-altering discovery, no matter the cost.

And when some of the members of a support group for Returne addicts suddenly disappear, Bryn begins to wonder if the government is methodically removing a threat to their security, or if some unknown enemy has decided to run the zombies into the ground…

Stand alone or series: Book two of the Revivalist series

Why did I read this book: It’s no secret that I love Rachel Caine’s urban fantasy – her Weather Warden series (and spinoff Outcast Season books) are amongst my favorite contemporary fantasy series’ ever. Last year, when I discovered that Rachel Caine had a brand new heroine and universe in Bryn Davis and the Revitalist books, I was ecstatic; Working Stiff did not disappoint. Naturally, I was very excited to dive back into Bryn’s revived state of undeath with Two Weeks’ Notice.

Bryn Davis has had a rough couple of months. Getting killed your first day on the job is no picnic – waking up realizing that you are now in a weird, permanent state of undeath sustained by microscopic injection-delivered nanobots isn’t any more fun, either. While eternal youth and impossible healing ability has its perks, Bryn is addicted to designer drug Returné – she needs a shot, every 24 hours, or else she will start decomposing. Even worse, because she’s already technically dead, she’ll be conscious and aware during the decomposition process. Oh, and the nanobots have an in-built safety protocol that allow anyone knowing a specific code phrase to control Bryn’s every action.

The good news is that the worst seems to be over – Pharmadene (the corrupt corporation behind Returné) has been toppled, and the FBI is happy to provide Bryn with her own steady stream of Returné (which she has tinkered with to disable those pesky mind-control side effects), as long as she plays by their rules. Even though her sister Amy (also one of the walking undead and addicted to Returné) is missing, Bryn knows it’s only a matter of time before they are reunited. She’s settling into her job as Funeral Director, she’s got a great boyfriend (who comes complete with mansion), and a few trustworthy confidantes. Life, or Bryn’s semblance of life, seems good.

But things go to shit, as they are wont to do, when the FBI shows up and blackmails Bryn into working for them to find more of Pharmadene’s deeply buried secrets. Her investigation unearths a plot even more sinister, as Bryn finds that a number of fellow revived Returné users have been disappearing, killed (again) in the most horrific ways imaginable. And Bryn, and all those she holds dear, could be next.

The second book in the ongoing revivalist series, Two Weeks’ Notice is good, fast paced fun, and dives headlong into the action and high-stakes one comes to expect from a Rachel Caine novel. The writing is brisk and competent, and as with the first book, I’m continually impressed with the fascinating take on “zombies” in this series. In particular, the deeper ramifications of accelerated healing are examined in depth here, as some of the revived are burned alive, eyes are gouged out with spoons (only to regenerate hours later and be subjected to the same gruesome torture), and so on and so forth. This is a terrifying twist – because, of course, healing may happen but the pain does not disappear – and Bryn’s ordeals in this second book are harrowing and many. Ms. Caine’s imagination, while twisted, is something I can respect because of this no-holds-barred brand of sadism towards her characters.[1. If, like me, you are a fan of the Weather Warden books, you are intimately familiar with how gleefully evil this author is with her characters.]

The other standout aspect of Two Weeks’ Notice is the figure of Bryn Davis, herself. Distinct and tough, but vulnerable when it counts, Bryn is a heroine that earns a place in a reader’s heart. My only teeny issue with Bryn is that at times her voice feels inauthentic to a twenty-some year old – certain phrases she’d say, colloquialisms she’d use, would date her as an older woman.

While the scope of imagination in this particular world with this particular premise are awesome, Two Weeks’ Notice is not without its weaknesses. Unfortunately, it felt like some of the magic was missing with this second novel. The trick with this type of Urban Fantasy – particularly Rachel Caine’s brand of UF – is seeding a conflict early on and carrying that conflict through to resolution (or to some terribly cliffhanger), by book’s end. This installment, however, was off the mark in terms of pacing and storytelling. The central conflict of the book – the disappearing Returné users – doesn’t become clear until at least halfway through the book, which means much of the front end of the book is…not boring, but wandering. It’s an odd thing to come across, especially in a book from Rachel Caine, but it put resistance on complete immersion and forward propulsion of this story. Add to this some problems with repetition, some overtly annoying imagery and symbolism (the spider and the fly in the last quarter of the book, for example), and there are some sizable problems with the text.

That’s not to say that Two Weeks’ Notice is a bad book, though. I truly enjoyed the novel, and devoured it eagerly enough – I’m just used to a higher bar when it comes to Rachel Caine’s particular brand of plot-heavy urban fantasy. Still, overall recommended, if not quite as spectacular as the first book in this series.

It was a perfect day for a funeral. Overcast, cool, no rain; sweaters, not coats. The wind was light and fresh, and although fall had arrived (as much as it ever did in California), the grass remained a bright jewel green.

From a purely objective perspective, it couldn’t have been better . . . though, in truth, Bryn Davis, funeral director, didn’t much care for the cemetery itself. This was a modern–style interment facility, so instead of picturesque Gothic headstones or marble sculptures, there were long expanses of lawn, spreading trees, and gently rolling hills—the impression of undisturbed nature, but oh so carefully created. Except for the recessed vases, some holding bright bouquets of flowers, it might have been a golf course. She wouldn’t have been at all surprised to see a cart roll over the hill and someone line up a difficult five–iron shot past the tent that covered the mourners and casket.

But then, she didn’t have to like this place, really; that was the family’s burden. She just had to give the impression of calm dignity as she stood with her hands folded. Until the ceremony was finished, her job was on hold—Mr. Raines’s remains had been processed and prepped, dressed and finished; the coffin had been sealed and carefully polished (nothing worse than seeing sweaty fingerprints on the shiny surface); flowers and memorial handbooks had been delivered and arranged; hearses and limousines had been freshly washed, stocked with tissues, and neatly parked. The actual graveside ceremony was Bryn’s downtime; it was her opportunity to run through the checklist in her head, over and over, to be sure she hadn’t dropped any details.
Next to her, Joe Fideli, her second–in–command, leaned closer. “Red alert. Mistress at your four o’clock,” he whispered, and she glanced that direction without moving her head. He was, of course, absolutely right. The widow, dressed formally in black, sat ramrod–stiff in the front row beside the coffin, but they’d already been warned that she wasn’t the only woman in Mr. Raines’s somewhat colorful life.

His mistress had gone with mourning color, at least. She’d chosen a Little Black Dress, more appropriate for clubbing than a funeral, and paired it with heels that were too stiletto for the grass on which she was walking. Those shoes resulted in more of a stagger than a controlled stride. Lots of leg on display, and glossy, overdone hair.

She was headed for the funeral like a torpedo for a stationary ship, and Bryn could well imagine the spectacular bang that would make.

“Let’s avoid the drama,” Bryn whispered back, and Joe nodded. He was a big man, but he was light and quick, and besides, all eyes were on the priest. Joe faded back in slow, almost imperceptible movements, and put himself in the path of the other woman.

Reading Next: The Games by Ted Kosmatka