A Dude Reads PNR: Harry reads Sunrise in a Garden of Love & Evil by Barbara Monajem 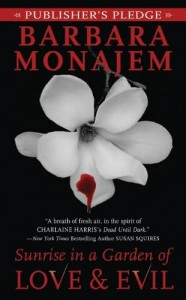 Title: Sunrise in a Garden of Love & Evil

Dark secrets abound in the town of Bayou Gavotte, Louisiana, from blackmail to fetish clubs to murder, and when blood-and-love starved vampire Ophelia Beliveau calls the police to scare away whoever is desecrating her garden, Detective Gideon O-Toole unearths more than he ever dreamed.

Why did I read the book: I wanted a different sort of a protagonist and Ophelia is a gardener, which seems galaxies away from the leather clad killer chicks.

How did I get the book: Ana, people. Stop asking that. Geez.

To further exploit the simile, “Sunrise in a Garden of Love and Evil” many highlights, where you cheer over a steak after Great Uncle Earl told a mildly inappropriate joke. You observe how the teen cousins are torn between mischief and maturity. Grandma Pearl is awfully sweet and this night can be easily used for a Coca Cola campaign. But after the moonshine hits the table, you learn why Uncle Bill is not allowed to drink and then talk politics and why that rotten Dewey, that cousin twice removed, shouldn’t be invited at all.

To speak straight, “Sunrise in a Garden of Love and Evil” is a good novel with deficiencies, which for different readers will push different buttons in weird combinations. The romance in the novel is treated with the old kiss-then-slap approach, which made me groan as much as it showed me how good the author is with her characterization. Ophelia and Gideon are both stubborn, strong willed, loud-mouthed Southerners. This works in the general sense. I have no issues with them individually. The motivation behind their actions is more than logical and consistent. And yes, given their habit to receive whatever they have set out to get, it’s more or less expected for them to collide on the relationship front and struggle for dominance. Call it aggressive courting. To recap, every move they make is not devout of sense, but honestly how many times can two people fight, warm up to each other and progress to a verbal standoff. And how many times can misunderstanding, lack of knowing personal facts about one another be the cause for the bigger spikes.

Yes, we are talking about the span of a few days, which to some would seem realistic, for they are seldom enough to explore a person. But after awhile, the moments become tiresome as the pattern in their interactions become repetitive. What jarred my reading for a long time was the river scene. Both Gideon and Ophelia were endangered and could die. I mean, Gideon was shot and survival instinct dictated that they frantically search for a cover. What do they do? They have sex. Then they nap… Naked… On a river bank… With a sniper on the loose.

I give Monajem the two thumbs up for following the rules she established in her world. To be a vamp is to be a semi-supernatural mutant. You get the fangs. You get the taste for blood and your spit has minor healing properties. The worst/best perk is that you are a sex magnet. And vampires need to either drink blood or have sex on a constant basis to function as normal and inconspicuous people. Ophelia is somewhat of a vegetarian and has taken a pause from sex, so when she sees musky Gideon with a flesh wound, magic happened. It’s a sound situation, but I am still not convinced that sex trumps survival.

That aside, Monajem writes strong, three dimensional characters. Ophelia is a gardener and you can feel her passion, her dedication and how affected her livelihood is by everything that happens. Details about plants, pots, trees and soil pop up all the time and give a unique flavor to the reading experience. Gideon on the other could seem standard alpha male material. He’s the womanizer and playboy of a cop, but Monajem manages to expand on the archetype with a close and personal intrusion into his childhood as the foundation of his current behavior.

I can continue in the same vein, discussing the various secondary and even episodic characters and I have paragraphs about each. Starting from Ophelia’s family [her half-sister Violet and her niece Zelda] and then moving to Gideon’s family [his sister Artemisia, who by the way was the sole character to annoy me after the bad guy], the Bayou Gavotte underworld leaders [Leopard and the charming Constantine Duffray], the Wyler family [they seem to be take up the antagonist spot] and even Jennie the dispatcher, who was charmingly cheeky. All these names may not speak anything to you know, but will make your reading even more enjoyable.

“Sunrise in a Garden of Love and Evil” is vibrant, because it embraces the world unfiltered. Monajem snares details and discreetly stores them within the prose, which becomes potent, if not with the long-winded lyrical eloquence I am partially addicted to. I could not fathom how Monajem manages to include Gretchen, Gideon’s favorite dog, into the story and make me like it, as I have an allergy, when it comes to animal protagonists. But Monajem never forgets anything happening in a scene and this quality to her writing immerses the reader as it projects a visual.

For the record, I knew, who the villain was. Thank you, Scooby Doo for that vital skill. But I failed to connect the dots, surrounding Ophelia’s big dark secret.

Verdict: I was torn between giving this novel a 7 or a 6, but settled down with the lower grade. Yes, Monajem offers an interesting take on vampires that does not involve the end of the world or anything that comes close. Monajem portrays a South I would love to be a part of, but even though I liked the chemistry between the couple, the relationship dynamic seemed repetitive and the outcome a bit unrealistic for the time span given. Marriage after only three days is a bit fairy tale material. And I consider Artimisia to be a character created as a plot device. She seemed less fleshed out and her actions served the purpose of swapping information between Ophelia and Gideon in order for them to warm up to each other again.

Reading next: “Deep Kiss of Winter” – I tackled the Gena Showalter piece.