It has recently been brought to our attention that another big Young Adult release may be pulling for a three-peat of Bloomsbury’s Liar and Magic Under Glass fiascos.

This time, the potentially whitewashed cover in question is the ARC of White Cat, the upcoming YA novel by Holly Black – and this time, the culprit is Margaret K. McElderry, a Simon and Schuster imprint. 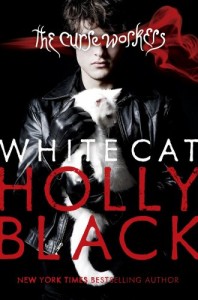 An anonymous comment was left on our recent “Cover Matters: On Whitewashing” post. The commenter quotes directly from the ARC of White Cat that imply the protagonist, Cassel, is in fact a person of color, and that the cover is another instance of whitewashing.

Here are some of the quotes from the commenter about the book:

(According to the commenter, “Many times throughout the book, we’re told that the Sharpe brother’s look a lot alike, so if Phillip has dark skin, it makes sense that Cassel does as well.”)

“I shake my head. ‘If they are, I don’t know where from. I bet mom for sure doesn’t either; although Gramps always says that his father–her grandfather– was a maharajah from India…” (ARC; page 43)

“‘Your grandfather told me that your family was descended from runaway slaves,'” she says. (ARC; page 43)

“People are always coming up to me on trains and talking to me in different languages, like it’s obvious I’ll understand them.” (ARC; page 43)

It is not a secret that we are against whitewashing. It is a racist, harmful practice. Before going off, denouncing the publisher and cover without all the facts, however, we decided to be cautious on this occasion for two reasons:

1) The quotes above seem to be indirect. They don’t describe the character that is depicted on the cover; they describe his relatives or how other people perceive him.

2) The book and cover are from Simon and Schuster, a publisher that has a good track record for publishing great, accurately depicted PoC covers.

We were outraged at the prospect of another whitewashed cover, but we also felt like we really needed to vet this ourselves. The above evidence seemed a little circumstantial and indirect – a person’s dark complexioned brother does not necessarily a PoC make (for that matter, teeth appearing whiter in contrast to skin could reflect anything from ethnicity to a good tan). So, we felt like we needed a bit more information – and luckily, we had an ARC for vetting purposes.

Here’s what we found:

The fourth quote above (about trains and different languages) isn’t in our ARC.

The second and third quotes are taken slightly out of context. Here’s the full quote from our ARC copy:

“Why did your parents call you Cassel?”

I’m defeated and amused. “Mom loved extravagant names. Dad insisted that his first son be named after him — Phillip — but after that, she got to name Barron and me whatever fanciful thing she wanted. If she’d had her way, Philip would have been Jasper.”

She rolls her eyes. “Come on. Are you sure they aren’t from her family? Traditional names?”

I shake my head. “If they are, I don’t know where from. I bet Mom doesn’t for sure either, although Gramps says that his father — her grandfather — was a maharaja of India. He sold tonics from Calcutta to the Midwest. Makes some sense that he could be Indian. His last name, Singer, could be derived from Singh.”

“Your grandfather told me that your family was descended from runaway slaves,” she says. […] “Yeah,” I say. “I like the maharaja story better. And don’t even get me started on the one where we’re Iroquois.” (ARC 43)

We’re a little bit hesitant to say that Cassel is a PoC based on this excerpt. Although the bolded line above does speak to the angle that Cassel’s (or at least Cassel’s mother’s) appearance may imply some different (read: non-white) traditional background, it’s still all rather inconclusive (for example, the very caucasian Angelina Jolie, Megan Fox, and Farrah Fawcett all claim to be of Iroquois/Native American descent). There is no physical description of Cassel throughout the book, and there aren’t any explicit clues as to his appearance or heritage here. With only this as evidence, we weren’t exactly convinced that White Cat was another egregious example of whitewashed covers.

So, we sat down with the book, combing through the pages for a physical description, and for anything racially/culturally/ethnically explicit rather than implicit. After a few hours of reading, we finally found what we were looking for:

“My cousin just got back from India,” I say, and nod in Lila’s direction. “Her parents were living in some ashram. I was telling her about Wallingford.”

Audrey’s hands go to her hips. “She’s your cousin?”

Lila scrunches her eyebrows for a moment, then a wide grin splits her face. “Oh! Because I’m so pale, right?’

Stacey flinches. Audry looks at me like she’s trying to see if I’m offended. Wallingford’s idea of political correctness is never to mention anything about race. Ever. Tan skin and dark hair are supposed to be as invisible as red hair or blonde hair or skin so white it’s marbled with blue veins. (ARC 226)

This is the closest to explicitly stated evidence that Cassel is a PoC (even at that, we find it a very interesting choice on part of author Holly Black – Lila remarks about her “paleness” as opposed to any mention of Cassel’s appearance or his implied darker skin tone).

We want to stress that neither Cassel’s physical features nor his ethnic background are ever fully revealed in the book. It’s also worth noting that Cassel is the first-person narrator, and he doesn’t seem to know (nor does he ever explore) his own background. It’s almost as if the Wallingford’s PC non-mention of race is something Ms. Black put into practice in her novel, which is rather cool in itself. Perhaps this quote is indicative of Holly Black’s point with White Cat, and with her non-descriptions of Cassel. (This kind of reminds us of Neil Gaiman’s American Gods, in which Gaiman doesn’t reveal that protagonist Shadow is actually a black man until the end of the book) Perhaps Ms. Black’s point is that race isn’t really a part of the story. Perhaps it is meant to be an affirmation of colorblindness.

On the matter of whitewashing, we don’t know what Cassel looks like or what his cultural or ethnic or racial background is. But there is no doubt in our minds that Cassel is at least of a darker complexion – but this could mean anything. He might be Indian, or Hispanic, or Middle Eastern, or Greek, or Nigerian, or Indonesian, etc. Though the other quotes are circumstantial and inconclusive at best, with this last explicit remark near the end of the book, we can conclude that Cassel is, at the very least, not pale-skinned in appearance.

Thus, the ARC cover of White Cat, with its pale, caucasian-looking model, is a misrepresentation of the protagonist. It is a form of whitewashing, and we definitely want to add our voices to those calling Simon & Schuster to change the cover.

Before getting up in arms about White Cat, we think that a few things should be said. First, in order to come to this conclusion about the whitewashed cover and Cassel’s appearance, it took us several hours of combing through the book with the dedicated, sole task of finding a physical description of the protagonist. We had to search long and hard for this information, only to find no explicit descriptions and yielding instead a bunch of implicit ones.

Thus, the case of White Cat isn’t exactly the same as those of Liar, Magic Under Glass, or The Mysterious Benedict Society. There was no explicit description of a black protagonist with kinky, cropped hair and no subsequent publisher decision to replace this clearly described PoC with a caucasian girl with long flowing tresses on the cover. And, considering that we spent hours looking specifically for these descriptions, we can at least see where things might have gone awry between editorial and cover art departments, and how the assumption of a caucasian protagonist in this particular book may have occurred. Considering, especially, Simon & Schuster’s excellent track record with diverse PoC book covers, we don’t think this was an intentional decision (as it clearly was in the case of Liar, MUG, & TMBS) – it certainly is nowhere near as harmful or openly racist as Bloomsbury’s decisions to use white models for clearly described PoC characters.

Thanks to a wonderful second-opinion consultation from esteemed (and wicked cool) author Sarah Rees Brennan – the only person we knew of that had read White Cat in its entirety – and some online research, we have learned that Holly Black HAS spoken out about her cover:

Cassel’s racial background is indeterminate, which makes him very hard to describe. His story is actually partially based on a fantastic true-crime book, Son of the Grifter, that I read while I was doing research for White Cat. In it, a man named Kent Walker described being brought up by his grifting mother. She often told him different stories about where his grandfather’s family came from – essentially robbing him of a clear sense of identity. In White Cat, Cassel doesn’t know his background–only the contradictory things people in his family have claimed. I’m glad the final cover shows him looking more tanned, in keeping with the way he actually looks in the book.

Also, we have learned that the ARC cover is NOT the final cover for White Cat. Holly Black has posted about this matter on her blog, in response to a concerned reader’s comment about whitewashing:

You are absolutely correct. The lighting at the shoot and the desaturation done to the photo made the model look very pale on the cover of the ARC. Cassel looks browner and more like himself on the final.

Here’s the comparison of the ARC (left) and final cover (right) (click to enlarge): 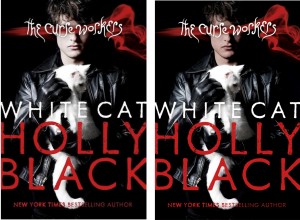 It might not be perfect, but it is (in our opinion) a marked improvement. This version of Cassel on the new cover is much closer to our mental image of him!

In response to our question about how author Sarah Rees Brennan felt about the cover, she told us the following:

I’ve read the book, and I thought it was very cool how Cassel’s family being conmen means he literally doesn’t know where he comes from – to reflect that the three models for the Sharpe brothers (the other two are on the back) are all from different racial backgrounds. But it does mean Cassel’s look was always going to be tricky to portray with a people cover, since he doesn’t actually know whether he’s a PoC or not.

And after reading the book for ourselves, we wholeheartedly agree with Sarah’s opinion.

So what about you? Any thoughts? We’d love to hear from you about this particular cover!

For more on White Cat by Holly Black, check out these links:

“Coverfail” article from Meg of The Librarian’s Bookshelf

Holly Black’s LiveJournal in which she responds to a heartfelt, awesome comment

And we will leave you this evening by letting you all know that while we made it sound like writing this post and gathering facts was some arduous task – it actually wasn’t, because White Cat is a fantastic, awesome read! (Don’t worry, we’ll review it closer to the release date this May)…