A Smugglerific Cover: The Iron Witch by Karen Mahoney

Our good friend, Honorary Smuggler, and Altogether Awesome Individual Karen Mahoney has her debut novel, a young adult fantasy titled The Iron Witch scheduled for release in February 2011 – and it is with the deepest, most profound JOY that we unveil her MOST EXCELLENT COVER! Behold!

The Most Excellent Cover: 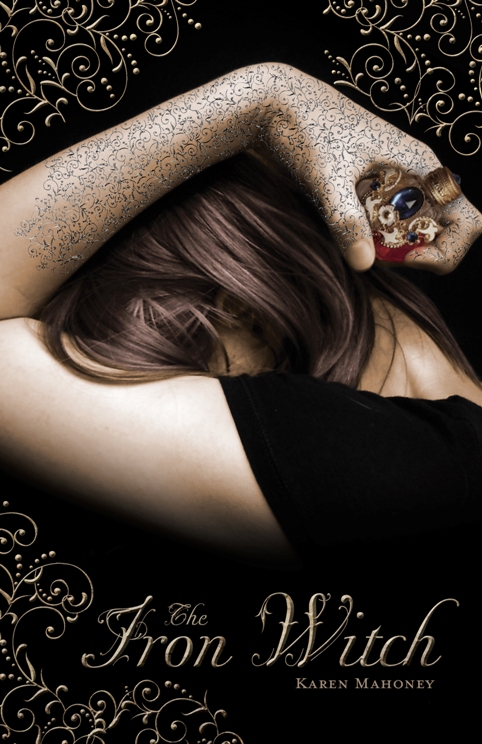 Seriously, isn’t it GORGEOUS? The fonts, the color, the girl’s pose. It is all pretty awesome and we cannot wait to read it (is it February yet?).

For now, we have a few extra tidbits for you to feast your eyes upon.

Freak. That’s what they called seventeen year-old Donna Underwood in high school after a horrific fey attack that killed her father when she was just a child. Her injuries and rehabilitation resulted in magically enhanced strength, thanks to the iron tattoos branding her hands and arms. As a child of the alchemists, she is both blessed and cursed with a magical heritage that permeates her life with duty and sacrifice.

Now, after ten years of wishing for a normal life, she finally has to
accept her role in the centuries-old war against the darkest outcasts
of Faerie: the Dark Elves. Aided by a gorgeous half-fey dropout, Donna must race to save her best friend’s life – even if it means betraying the secret of immortality and confronting the very thing that destroyed her family.

The Exclusive Excerpt:
Please note: excerpt is pre-copyedits and subject to change

They let themselves out of the house and Donna toed an empty beer bottle out of the way as she glanced across the street. And then she gasped as she saw a skinny shadow duck down behind the low wall surrounding the opposite house’s front yard.

Her mouth was suddenly dry and she stopped walking.

“What’s up?” Navin had his hand on the heavy iron gate, ready to step out onto the sidewalk.

“Wait,” she replied, grabbing his arm and wincing as she squeezed too tightly.

He frowned and made a big show of rubbing his arm as she released him. He studied her face for a moment. “Donna, what is it?”

She scanned the street, swallowing past the lump in her throat. Her
heart was pounding. There! There it was again.

A small silhouette moved with uncanny grace, sliding through the
shadows as it climbed over the wall into the next yard.

“Do you see that? Something just went over that wall, I saw it.” She was whispering and knew she must sound like she’d lost the plot, but she couldn’t help it. Donna was certain that whatever she’d just seen slithering through the shadows was something a lot more sinister than a Really Big fox.

“There’s nothing there, Donna.” Navin fixed her with a strange look.
“Are you sure you haven’t been drinking?”

“Actually, I have no way of knowing that considering how you decided to spend most of the evening wandering around upstairs in a strange house. On the roof.” He raised an eyebrow, something Donna had always wished she could do. The single-eyebrow raise was, sadly, not something she had ever been able to master. Not even with Nav’s expert tuition.

“Oh, just forget it.” She let out the breath she hadn’t realized she’d
been holding. “Maybe I really am going nuts.”

“Going nuts? I’m sorry to inform you that it’s far too late for that, Underwood.”

Resisting the temptation to demonstrate just how strong she really
was, Donna couldn’t hold back a sigh of relief when their cab pulled
up. At least Navin was teasing her again. The tension between them
from moments before seemed to have lifted. But she still couldn’t help
looking over her shoulder as she climbed into the backseat of the cab,
and she knew she wouldn’t feel happy until they’d gotten out of there.

Donna was almost certain that something had been watching them from across the street, and the crawling sensation in her stomach stayed with her all the way home.

The Iron Witch will be published by Flux in February 2011 and Random House Australia in March 2011.