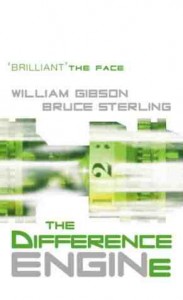 The computer age has arrived a century ahead of time with Charles Babbage’s perfection of his Analytical Engine. The Industrial Revolution, supercharged by the development of steam-driven cybernetic Engines, is in full and drastic swing. Great Britain, with her calculating-cannons, steam dreamnoughts, machine-guns and information technology, prepares to better the world’s lot . . .

Why did I read the book: It appears in every single Steampunk Essentials lists and one of the best examples of Steampunk. I just had to read it.

The Difference Engine seems to be universally praised as one of the core Steampunk titles and it makes pretty much every single list I came across whilst reading about the genre in preparation for this week. Since this is hailed as required reading for anyone interested in Steampunk, I obediently added it to my reading list.

Thus, here I stand after reading a seminal work of Steampunk, completely conflicted about the novel.

The novel is set in 1855 but an alternate 1855 where British inventor Charles Babbage actually succeeded with his idea of a Difference Engine – an early computer. This alternate world is mostly a consequence of this invention with all of its political, economical and sociological implications and the authors use real life figures as well as literary characters to inhabit their world and to live their story. Thus, Britain is a much more powerful potency who is at peace with France (and Manhattan is a communist island led by Karl Marx) ; Lord Byron (perhaps the alternate bit that was harder for me to believe in) is the Prime Minister of an England led by the Radical Party (or Rads) , with computers being mass-produced and there are even hackers or “clankers” in this world.

But this is only the setting and it is obliquely referred to in the course of the novel. There is hardly any info dump about what happened before 1855 and how things came to be – the reader must catch up as the story proceeds. And no, the book is not about the Difference Engine per se – at all.

Centre stage is a story divided in three parts with three main characters: Sybil Gerard, a prostitute and daughter of an infamous Lud leader ; Edward Mallory, a “savant” , a palaeontologist; and Laurence Oliphant, travel writer to cover his work as spy – the three of them are linked by a set of computer Punch Cards which change hands throughout the book and almost makes it a mystery novel – what are they? What are they for? Who do they really belong to?

Rather, the novel it is a tour de force about the possible consequences of engine’s creation and as such it is an interesting, even fascinating read. However, this is mostly done subtly in the background, submerged in threads, in the recounting of the day-to-day life as the characters walk around sometimes talking to themselves as the narrator describes their surroundings. Mallory, for example who often muses about how the dinosaurs were extinct , but also about his role in dealing with political problems in America and his economical situation. He is caught in the middle of the overarching plot that brings together everything in the book, including the Great Stink and the last of Luddites rebels resurfacing in London but perhaps not as tightly as many would certainly prefer.

My conflict about the novel stems from two points. One, the fact that if one goes into the book blind, ie without any knowledge about its setting or any historical knowledge about England and France circa 19th century chances are, one will be inevitably lost or reaching for Wikipedia every two pages or so (as was my case).

The second point is that even though, intellectually I can certainly appreciate the genius of the idea and the premise, as well as the mind-blowing effort of bringing together that many characters and events together in an interesting and certainly fascinating manner, I will just be honest and admit that I was bored out of my mind for most part of novel and I had zero emotional connection with any of the characters. The most interesting ones were Sybil and Oliphant and their chapters were the best ones, however they were also, the shortest part of the novel and the Mallory chapters dragged and dragged and dragged. I never read anything else by either author but I am almost sure that one wrote the Sybil/Oliphant parts and the other wrote the Mallory one – I just can’t pinpoint which.

To conclude, I am happy to have read the novel, I think it was a worthwhile experience which I hope never to experience again. Even if the ending was superb : a one letter word. One word and I was like, OMFG, genius. But then I remembered the Mallory parts.

BUT IS IT STEAMPUNK? Oh yes. It is the most quintessential Steampunk I read this week. It is the perfect balance of all its classic elements, but is not an easy ride.

Notable Quotes/ Parts: The moment it really hit home to me, that this was indeed an alternate history more than anything else in the book:

Up Knightsbridge and past Hyde Park Corner to the Napoleon Arch, a gift from Louis Napoleon to commemorate the Anglo-French Entente.

The fact that there the famous Wellington Arch is NOT there because Wellington was considered a tyrant in this England made me jump out of my pants.

Additional Thoughts: It is impossible to read this book without checking some facts online – at least it was for me. The most fascinating of those to me: the computer punch cards that were mentioned several times.

According to Wikipedia, punched cards

is a piece of stiff paper that contains digital information represented by the presence or absence of holes in predefined positions. Now almost an obsolete recording medium, punched cards were widely used throughout the 19th century for controlling textile looms and in the late 19th and early 20th century for operating fairground organs and related instruments. They were used through the 20th century in unit record machines for input, processing, and data storage. Early digital computers used punched cards as the primary medium for input of both computer programs and data, with offline data entry on key punch machines

But that is not what makes it fascinating to me. It is the process of discovery.

For example: Joseph Marie Jacquard invented the Jacquard Loom. This loom is controlled by those punched cards with punched holes , each row corresponding to a row in the design – this simplifies the process of manufacturing textiles. 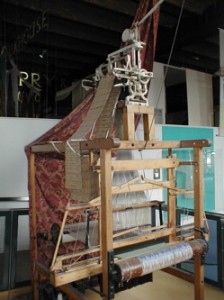 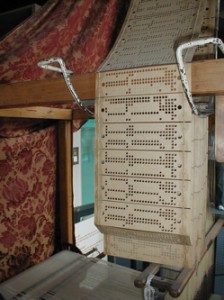 Now, here is the deal:

The Jacquard loom was the first machine to use punch cards to control a sequence of operations. Although it did no computation based on them, it is considered an important step in the history of computing hardware. The ability to change the pattern of the loom’s weave by simply changing cards was an important conceptual precursor to the development of computer programming. Specifically, Charles Babbage planned to use cards to store programs in his Analytical engine.

Verdict: This epitome of Steampunk is a difficult read with some very rewarding parts if you stick to it – I recommend it – with reservations – for fans of the genre.

Rating: /strong> This is a most difficult question. I will have to be conflicted about this as well.

8 – Excellent : For its undeniable contribution to the genre and the sheer genius of the Big Idea behind it. The plotting and the amount of history that goes into this is mind-blowing.

6 – Good : Because in spite of all the above, the book can drag and only a couple of the characters are really minimally interesting and moving (although one can argue that this is not a book about characters – to which I will reply, ergo why I didn’t really care for it) .

Reading next: Boneshaker by Cherie Priest