A couple of months ago read, or at least, try to read, Night’s Rose by Annaliese Evans and it ended up being the first ever book that neither of us were able to finish. The result was a conversational style review in which we examined the reasons why we did not finish the book. The review sparked a pretty good discussion on reader’s expectation based on blurb and cover and about publishers’ marketing strategies. You can read all about it here.

We also had a giveaway with that review and we offered the winner, Danielle (who was chosen randomly), the option to write up a review of the book, agreeing or disagreeing with us – and she accepted it. Here is what she has to say. 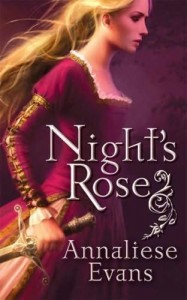 Stand Alone or series: first in a series

Summary: Beauty was not awakened by a kiss.

For nearly one hundred years, Rosemarie Edenberg has worked tirelessly to wipe the dreaded ogre tribe from the earth. Now the tribe has gathered in London to work a spell that will destroy the scourge of their kind, the woman they call the Briar Rose.

Two magnetic men will unite to aid Rose–her mysterious Fey advisor, Ambrose, and the vampire, Lord Shenley, an Earl of scandalous reputation and even more scandalous appetites. One will save her, one will betray her, and both will challenge her to face the past that haunts her.

Once upon a time, she was ensnared in the mists of enchantment, cursed to sleep one hundred years. But this beauty wasn’t awakened with a kiss, and has never known happily ever after.

With the help of her handsome allies, Rose may yet find it

*keep in mind I am a horrendously under-experienced reviewer*

Previous to my findings here at the Book Smugglers, I have heard good things about Night’s Rose–good characters, good plot, good description, etc. So I was pretty torn when I read Ana and Thea’s less-then-pleased review, especially since, from my short time reading their blog, they seem able to stomach just about anything. So when the book–plus its sequel, the King of Frogs, arrived at my doorstep, I was rather nervous.

Now, having read it, I have one and one word only:

Now, I have taken health class, and no where–NO WHERE–in the curriculum did we ever refer to our reproductive organs as SEX and, I’m sorry, but the whole, ‘my hungry womb’ thing just sounds painful. Or pregnant. I can’t decide.

This is not even bad in a funny way. This is bad in a horrible, scarred-for-life kind of way.

And, evidently, while men have their erections to show their attraction to someone, we ladies have our budding nipples.

Susan B. Anthony would be proud.

While I agree with Ana and Thea that the beginning is just plain badass. Dark and thrilling, I at first loved Rose’s narration, and her small bits of insight as she stalked about the maze:

In recent years, she had made a habit of dressing as a young boy on the evenings she hunted the members of the tribe. It was easier to move freely in male clothing. So much easier, in fact, she began to suspect feminine fashion a plot to keep females docile and submissive.

She is, at first, tough, completely competent, a trained killer who’s sent to kill a group of Ogres, called the Tribe. The first chapter is, by far, the only redeeming quality of Night’s Rose, as the rest of the book consist of wtf??? Sexual descriptions, strange sex scene, odd romances (with a man that watched you get RAPED and did NOTHING about it? Really, Rose? Really?) and…this:

The purely masculine feel of that rock hard furred skin against hers was almost as breathtaking as the mouth teasing back and forth between her breasts.

Furred skin? Is he a werewolf now?

He sucked her bud into that wet cavern

I’m thinking about a cave, and I really, really shouldn’t be. Unless said sex is actually taking place in a goddamn cave. (What’s a bud?)

Again, none of this came up in health class.

At first, I thought I was letting this effect me because A) I’m not a fan of romance and B) I burst into a hysterical fit of giggles whenever the word ‘nipple’ comes into the conversation, but upon further examining, I found it really is just a ridiculous read. What could have been a wonderful re-telling of a classic story has become an…aching womb.

I feel proud just to have finished it without throwing it into the fireplace and running to my mommy asking her why in the name of God someone would have creaming going down their thighs.

And, I agree with Ana and Thea, the ‘hairbrush’ thing was where I almost lost it as well:

Gareth’s grip on her hair grew even tighter, holding her in place as he brought the flat of the brush down on her bottom. Once, twice, three times, until a moan burst from her lips. To her surprise, it was not a sound of protest or pain, but an invitation for her husband to continue his rough treatment. Her sex already ached, damp with excitement, her body eager to feel Gareth’s cock shoving inside her from behind.

Keep in mind the author is Dead. Serious.

If you’re the type who can stomach phrases that no normal human being should know the meaning of, this books for you. Otherwise, it will just leave you confused, sitting in a corner worried that your big, bad aching womb will come and get you.

So, thank you Ana and Thea for sending me the books, but I’m afraid I’ll be passing this one along. To who, I haven’t the slightest idea, but I’m sure I’ll find someone.

Joint Review: An Ember in the Ashes by Sabaa Tahir