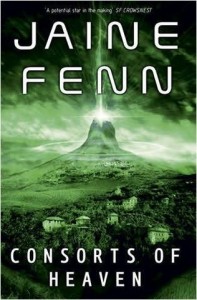 Stand Alone or Series: Can be read as a stand alone novel, though it is set in the same universe as Ms. Fenn’s prior novel, Principles of Angels. A third novel, titled Guardians of Paradise is in the works, and will unite characters and loose ends from the first two books.

Why Did I Read This Book: I had heard about this title on a number of blogs and my interest was piqued. So, when we were offered a review copy of Consorts of Heaven, I eagerly accepted.

Summary: (from Amazon.com)
The book is SF, but the first three-quarters take place in an almost fantasy setting. It is not a sequel to PRINCIPLES OF ANGELS, but it is set in the same universe and share the same villains, the Sidhe.

When a naked, amnesiac stranger is found outside a remote highland village, he is taken in by Kerin, a widow whose unconventional ways are tolerated because her son Damaru is ‘skytouched’ – he appears simple, but he is able to affect matter. All skytouched are tested by the Beloved Daughter, the living goddess who rules the world from the City of Light. If he’s found worthy, Damaru will become a Consort of the skymothers, the Gods of this world.

Kerin and the stranger, nicknamed Sais, accompany Damaru to the City, in the company of a priest who’s helping Sais to get back his missing past – but as Sais recovers his memory, he realises that the world does not work the way he assumed – and everyone believes – it does. Worse still, the hierarchy which has kept society stable for thousands of years is rotten to the core. Then Kerin and Sais uncover the true nature of the world, and the unimaginable fate of the Consorts – a fate Kerin will do anything to stop her son sharing.

While searching for her wayward “skyfool” son Damaru in the bogs surrounding her village, Karin stumbles across a naked unconscious man. He’s near death, and Karin takes it upon herself to save him, dragging the stranger to her hut and administering what simple care she can for him. When the strange man awakens, however, he remembers nothing – not who he is, or where he has come from. What’s even more strange to Karin and to the people of her village is that while the man speaks the same tongue and recognizes objects for what they are, he remembers nothing of their world’s traditions, or even the most basic tenets of their deeply religious society. Sais, the name the stranger takes for himself, finds himself terrified and alone in a world that makes absolutely no sense to him with only Karin’s kindness and companionship to sustain him. When the village blames Sais for the most recent outbreak of the “Falling Fire” (a deadly disease) and attempts to put him to death, Karin is able to argue for his life and manages to convince the village that Sais most likely is a nobleman from the lowlands near the City of Light. She also manages to convince the village council to allow her to travel with the convoy to accompany not only Sais, but also her son. As an autistic boy, or skyfool (one touched by their gods, the Skymothers), 15-year old Damaru must make the trek to the City to be presented for testing as a consort to the gods. Since women have practically no status in this highly patriarchal society, Karin’s presence on the journey is unprecedented – but as a loving mother and a friend to Sais, she stubbornly refuses to be intimidated.

As the convoy makes it closer to the City, Sais recovers his lost memory – and makes a horrifying realization. Karin’s world, its backwards society built around supposedly benevolent Skymothers is a grotesque facade…and it now rests on Sais and Karin to save Damaru, and reveal the truth.

I should mention that I haven’t read Principles of Angels, Ms. Fenn’s first novel, set in the same world as Consorts of Heaven – and this may or may not have limited my enjoyment of this novel. Though marketed as a stand alone novel, and it doesn’t seem that reading Principles of Angels is necessary to Consorts of Heaven, I had the distinct feeling that some aspects of the story – especially in the later chapters as Sais reveals to Karin the truth of the Skymothers – would not have seemed so abrupt and out of place had I read the other book first.

As a novel that stands alone, Consorts of Heaven is a good, if predictable, read. The plot itself is nothing new: Consorts of Heaven takes place in a familiar type of dystopian, low-tech future on a backwater planet with Dark Age-era technology, home to a race that seems suspiciously human and ruled by cruel and distant gods. Indeed, a number of cliches abound in Consorts of Heaven – the brilliant autistic boy child, the amnesiac stranger, the strong (and shunned) mother figure, the bullheaded (and sexist) male society, and the purely malevolent villains.

And yet, it is testament to Ms. Fenn’s skill as a writer that this novel is eminently readable, despite the simplicity of the story.

At first glance, Consorts of Heaven seems much more of a traditional fantasy novel of the quest/journey variety, as Karin battles prejudice and bravely provides for her son and for Sais. As Sais has the epiphanous revelation of his past, however, it becomes clear that this is indeed a science fiction novel. Unfortunately, the nature of the big revelation is one that readers should easily be able to piece together from the opening chapters (if not from the blurb itself), and furthermore is poorly executed in a rushed info-dump, telling instead of showing. This is a shame, especially considering that the bulk of the book is nicely paced and well-written. (Then again, perhaps the big twist would have felt more congruous with the story had I read Ms. Fenn’s first novel)

With these gripes about lack of originality and the rushed, predictable reveal aside, Consorts of Heaven remains a good, solid read. Ms. Fenn’s gift for storytelling is undeniable, and her main characters are sympathetic and well-written. Karin is the star of Consorts, believable as a strong woman who refuses to submit to the cruelty of others so far as her child is concerned. Her quiet resolve as a mother is admirable and rings as completely genuine. Sais is a similarly well-written character, believable and likable enough. The relationships between Karin, Sais and Damaru are also wonderfully realized, especially Karin’s mix of frustration and love with her autistic child and the bond of friendship and trust that blooms between Karin and the mysterious Sais. Thankfully, Ms. Fenn veers away from the boring and predictable with regard to Karin and Sais, refraining from a run-of-the-mill romance storyline. It is the strength of these characters, and of Ms. Fenn’s writing, that make Consorts of Heaven an enjoyable novel despite its flaws, and I am eager to see what this author does with her next novel.

Notable Quotes/Parts: An excerpt of Consorts of Heaven‘s first chapter is available online HERE. Check it out!

Additional Thoughts: Consorts of Heaven joins the ranks of science fiction-science fantasy stories, blending low-tech (or pre-tech, or even no-tech) societies with high-tech elements. Some other books that span this science-fantasy gap are Anne McCaffrey’s Pern books, the Samaria books by Sharon Shinn, and the Darkover series by Marion Zimmer Bradley. 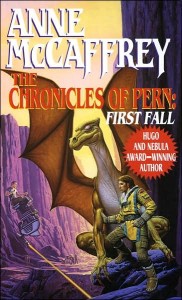 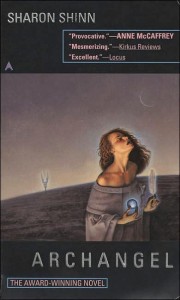 Any other suggestions or favorites in the science-fantasy novel genre?

Verdict: Though not without its missteps, Jaine Fenn’s second novel is an entertaining read. Consorts of Heaven features strong writing and nicely realized characters, making Ms. Fenn a voice to look out for in the science fiction genre.