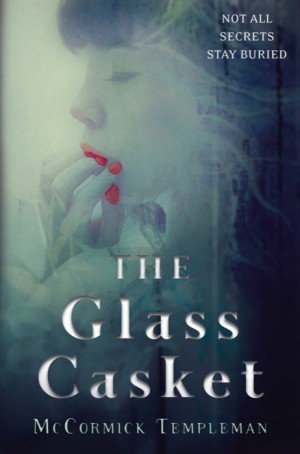 Death hasn’t visited Rowan Rose since it took her mother when Rowan was only a little girl. But that changes one bleak morning, when five horses and their riders thunder into her village and through the forest, disappearing into the hills. Days later, the riders’ bodies are found, and though no one can say for certain what happened in their final hours, their remains prove that whatever it was must have been brutal.

Rowan’s village was once a tranquil place, but now things have changed. Something has followed the path those riders made and has come down from the hills, through the forest, and into the village. Beast or man, it has brought death to Rowan’s door once again.

Only this time, its appetite is insatiable.

Why did I read this book: I first heard of The Glass Casket during this past Smugglivus, when author Kristen Kittscher named the book as one of the best, most impressive works publishing in 2014. Naturally (especially given how much I trust Kristen Kittscher’s opinion), I immediately honed in on this novel – and when I saw it last week in my local bookstore, I snatched it up and devoured it whole.

Nag’s End is a quiet, remote village in the mountains, far away from the cities of the south and the sea. Things in Nag’s End are different than elsewhere in the kingdom – the mountain people cling to their traditions and superstitions, they keep to their way of life at the edge of the woods, apart from the rest of the world. Here, the dead must be buried and offered to the Goddess within 24 hours of passing on; here, there be witches, and fairies, and goblins in the shadows.

Of course, Rowan Rose doesn’t believe any of it.

The daughter of a scholar, Rowan has been taught by her father since she was a child to rely on science and reason over superstition and tradition. Like her single parent, Rowan has learned how to read and write in many languages, has honed her mind to translate and discover the truths in old texts, and she dreams of leaving the village behind to study in the grand palace city.

But then, one day, death comes to Nag’s End – with its stinking breath, dripping blood, and oozing insatiable hunger.

As the villagers die tragic, horrific deaths, Rowan grapples with the truth of reason and the impossibility of the supernatural she’s always shunned. In order to defeat this great evil, Rowan will need both her wits and belief in the unknown – the lives of all she loves depend on it.

Wow. Wow. I’m not sure what I expected when I started The Glass Casket, except that I had some vague notion that it was a horrific fairy tale retelling of Snow White and Rose Red. I was not expecting this achingly beautiful, brutally terrifying fable about secrets, about faith misplaced and found, and about the bonds of love between family, friends, and lovers. I wasn’t expecting to lose a little piece of my heart to the brilliant Rowan Rose, to the passionate Fiona Eira, to steadfast Tom, and the quietly observant Jude. I wasn’t expecting that The Glass Casket would be the best book I’ve read so far in 2014.

Suffice it to say: I love this book.

I loved the book from first sight – that delicious cover (which is very fitting in context of the book); the eerie description of the novel that sets the mood but thankfully gives nothing away. When I started The Glass Casket, I wasn’t sure what the book was about, other than an evil – possibly supernatural, possibly mundane – terrorizing a small medieval-ish town in the mountains. Really, that’s all you need to know going into the book – the not-knowing is actually a huge part of this book, and I will endeavor not to reveal too much about the plot and its particulars because the gradual horror of discovery is part of the magic of The Glass Casket.

What I will say is that this novel is a beautiful, tragic fairy tale with viciously sharp teeth. This is not a happy tale of young beautiful girls finding their truest loves and living happily ever after. There are beautiful girls, there are true loves, but there is also much blood and death, too. No. The Glass Casket is actually, at its gory, eviscerated heart, a story about power, both subtle and overt. There’s the power of the bonds of love between family: between a daughter and her beloved father, the ties to a mother she’s never known but somehow remembers and feels deeply, between siblings different as night and day. There’s the power of love at first sight and of love realized over time, and how that love sustains even the darkest of forces. On a more specific level, the novel also subtly examines the power dynamics of “ownership” and patriarchy – Rowan’s and Fiona’s feelings of helplessness in particular are heartbreakingly rendered in this book. Rowan loses her implicit trust and blind faith in her father, and is trapped under the weight of expectation; her helplessness in the face of her father’s expectations, her shifting relationship with her best friend Tom, and the other men that insinuate themselves in her life is, frankly, terrifying. Likewise Fiona, Rowan’s mother, the young Merrilee, the greenwitches and the bluewitches, and all of the women in this book feel the biting, unrelenting edge of this disenfranchisement – and with all the violence of suppressed rage and hunger, there is a reckoning.

Damn, I love this book.

The writing is polished and atmospheric, in the vein of Margo Lanagan’s Tender Morsels or Erin Bow’s Sorrow’s Knot. The characters are beautifully drawn in all their flaws and strengths, with the determined self-aware Rowan leading the group. (I’m reminded of Sophia McDougall’s essay on “I Hate Strong Women” and how Rowan is a fitting, wondrous heroine antidote to “strong.” She’s a brilliant scholar, a polyglot, who cries when she needs to cry, who asks for help, who believes in her friends and herself. She is not merely strong; she is a complete, vivid person, and I love her very much.) The relationships are poignant, the power dynamics examined in exquisite detail.

The Glass Casket is not an easy story, nor is it one that leaves you feeling giddy and put in the mind of happily ever afters with rosebuds and rainbows.

But it is a thought-provoking novel; a dark horror-fantasy with bite. I loved every precious morsel, and wholeheartedly recommend that you likewise partake in The Glass Casket.

Absolutely recommended, and already on the shortlist for my favorite books of 2014.

It was a coffin. A glass coffin, intricately carved, and set out in the yard for all to see. Inside it was the girl, her black hair splayed out around her, her lips like rotting cherries set against a newly ashen complexion.

Her body had been swaddled in white mourning cloth, but it was possible to see that she was no longer a full person. Flowers of blood bloomed where her chest should have been, and there was a dip to the torso that intimated she’d been all but hollowed.

Arlene’s hand flew to her mouth.

And then the world seemed to spin, and a deafening cry rose up in Arlene’s ears, surrounding her, threatening to swallow her up, and she lost her ballance, her feet faltering in the snow. It was only when she caught herself that she realized that the scream had been her own.

Fighting back tears, she turned and hurried out of the yard.

Over at Kirkus: Throne of the Crescent Moon by Saladin Ahmed.