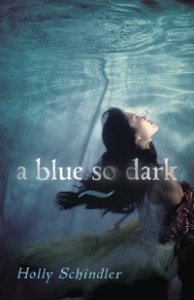 Fifteen-year-old Aura Ambrose has been hiding a secret. Her mother, a talented artist and art teacher, is slowly being consumed by schizophrenia, and Aura has been her sole caretaker ever since Aura’s dad left them. Convinced that “creative” equals crazy, Aura shuns her own artistic talent. But as her mother sinks deeper into the darkness of mental illness, the hunger for a creative outlet draws Aura toward the depths of her imagination. Just as desperation threatens to swallow her whole, Aura discovers that art, love, and family are profoundly linked—and together may offer an escape from her fears.

Why did I read this book: It a decision based on the cover, simple as that. I think it is a striking cover and I didn’t even need to know what the book was about, I just knew I wanted it.

How did I get this book: I was planning to buy it but when I saw the book at the publisher’s booth at BEA I basically begged for a copy – and they were kind enough to give me one.

(…)how many of us have to wave goodbye to our hold on reality?

A Blue So Dark tells a vivid (and often terrifying) tale of a 15 year old Aura Ambrose (who narrates in first person, present tense) whose mother’s schizophrenia takes a turn for the worse when she stops taking her medication. Aura is isolated, alone, trapped in a situation she can’t control, having promised her mother not tell anyone about her worsening condition. Her father left them months before to start a new life with a shinning new (healthy) wife and her best friend is struggling with her own problems after a teenage pregnancy left her basically on her own to tend for a baby.

As the days go by and Grace’s mental illness take hold, the situation grows worse with Aura having to skip school to take care of her mother, having to lie her way out of situations, whilst trying to figure out ways of caring for her mother which at one point include personal cleaning and feeding when she is absolutely incapable of doing it on her own until the situation reaches a point where Aura needs to make a difficult choice.

The story takes place over a really short period of time and the almost suffocating atmosphere makes it for a gripping and painful read. Holly Schindler’s writing is beautiful and perfectly effective in showing a mind delving in the depths of the unknown and of madness at the same time that is shows the terrible repercussions for those around. It is an even more terrible picture because the narrator of the story is only 14-15 having to face it all alone. The task is magnified by the fact that Grace is an artist and her illness seems to be hereditary – her own father, also an artist was too a schizophrenic who took his own life. The horror and anguish that this causes Aura is absolute, all the more poignant by her own artistic vein which she tries to smother and silence because she thinks Art and Mental Illness have a close, intrinsic, fundamental relation. Because there is no one to tell her otherwise, the kid immerses herself in imagined scenarios where her art will make her crazy in the future.

This combination of art and mental illness is probably the best aspect of the story and made it more interesting and sad. As sad as the portrayal of Aura – because this is a girl trapped in a house and a situation out of her own volition. Strictly speaking this is a somewhat easy fix: call her father, speak to a teacher, talk to her grandmother, and ask for help. But Aura made a promise and the thought of losing her mother’s love after her mother’s mind has been lost is the worst possible thing that could happen. In that case, it is easy to understand her actions.

As much as I like the story, the atmosphere and the writing, I had a couple of issues that prevented me from truly loving this book. I felt that Aura was under-developed and I am not I really know this character beyond the confines of this particular scenario. I did know of her love for her mother and for art but I think I missed having more/. Because this all happens in such a short span of time though, this is perhaps, ok. But this confinement also prevents other secondary characters from being developed and having more depth. This is especially true when it comes to Jeremy, the love interest. I know close to zero about Jeremy and Aura’s crush on him felt quite superficial. The impression I had was that he was the Token Love Interest that most YA books seem to require and that is even clearer to me by how he is mysterious and dark and says cryptic things to Aura. Seeing as how he is not a Vampire/Werewolf/Fallen Angel/Zombie/Thing trying to keep a secret, I have no clue as to why he is “mysterious”. Thank God, even Aura muses at one point:

who the hell does he think he is with all this cryptic shit, some Zen master?

The biggest issue I had though, was how the ending seemed to be a little too perfect and sudden. Not because I don’t like hopeful endings – far from it – but because the contrast with the first part of the novel was too extreme making the overall result uneven.

Still, this is quite a debut and I will keep my eyes open for more from this author.

Notable Quotes/ Parts: Two quotes, one with connection to the title:

Her voice is low and thick. If her voice could be a color, it would be deep midnight blue. A blue so dark, it looks black until you get something else – a sock or a sweater – next to it to compare the shades

And one that OMG is SO true – I find that adults tend to condescend a lot to teenagers which is also true about adult readers on YA fiction:

Because the thing is, when they’re not treating us like gypsy scum, the teachers are all looking at us in this condescending way. I mean, they think we’re capable of hacking into the computers to change our grades, and they practically nail thier purses to their chests because they think we’re crafty enough to sell their identities over the Internet, but they don’t think we could ever grasp something as simple as a freaking metaphor?

Additional Thoughts: The close relationship between art and mental illness is something that I always found fascinating. The book explores this quite well but for the majority of the novel this relationship was approached with a negative point of view from Aura’s perfective when talking about Van Gogh for example. But as someone points out later in the novel, obviously not all artists have mental illnesses.

It is also true that art can alleviate symptoms of mental illness and even help with a cure. In fact, art is a form of therapy in itself and can be used to bring back patients and recreate a link to reality. Years ago, when I was still living back home, in Brazil and was studying history of madness (after reading Foucault’s fascinating book ) I had the opportunity to visit a Psychiatric Hospital which had been founded by Dr Nise da Silveira, a student of Carl Jung and follower of his methods.

That hospital revolutionised treatment of its patients – who were schizophrenics, in their majority – by refusing to use methods such as electroshocks and employing occupational therapy and art. The breakthrough in some of the cases was astonishing.

A museum was created to host the art by the patients – Museu de Imagens do Inconsciente (Museum of Images of the Unconscious) and even though the website is in Portuguese it is pretty easy to see some of the art by clicking on this link.

Verdict: A good debut novel who deals with the difficult issue of mental illness and its toll on the life of a 15 year girl who has to deal with her ill mother all by herself. The narrative is gripping, sometimes sad and despite some issues I had, I recommend it to those who enjoy realistic contemporary fiction.

Reading next:Shades of Gray by Jackie Kessler and Caitlin Kittredge