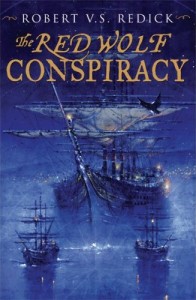 Stand alone or series: The Chathrand Voyage, Book One (out of four) .

Why did I read the book: Because of the positive reviews

Summary: The Chathrand – The Great Ship, The Wind-Palace, His Supremacy’s First Fancy – is the last of her kind – built 600 years ago she dwarves all the ships around her. The secrets of her construction are long lost. She was the pride of the Empire. The natural choice for the great diplomatic voyage to seal the peace with the last of the Emperor’s last enemies. 700 souls boarded her. Her sadistic Captain Nilus Rose, the Emperor’s Ambassador and Thasha, the daughter he plans to marry off to seal the treaty, a spy master and six assassins, one hunderd imperial marines, Pazel the tarboy gifted and cursed by his mother’s spell and a small band of Ixchel. The Ixchel sneaked aboard and now hide below decks amongst the rats. Intent on their own mission. But there is treachery afoot. Behind the plans for peace lies the shadow of war and the fear that a dead king might live again. And now the Chathrand, having survived countless battles and centuries of typhoons has gone missing. This is her story.

I will start with a most obvious statement: this book is about a Conspiracy. But not just any conspiracy:a Sinister one, a Bold one, to bring war about the world. A Conspiracy that spans across time and different countries (and even different dimensions); and which takes place, for most part, inside a ship. A ship of gigantic proportions, almost a world in itself (with seven decks and a hold) capable of holding over 800 souls, the oldest ship in the world (600 years old and counting) and one with a History and a secret mission: The Chathrand.

Yes, this is a book about a Conspiracy but also about the last voyage of the Chathrand, a fact we learn in the prologue. According to the newspaper clipping, the ship has been lost at sea. Whatever happened to the Chathrand and its passengers and how it connects with the Conspiracy is the main story-arc that will take place over the four books of the series. This first volume reads exactly like this: the first act of a major dramatic production. And when I say major, I mean major. To the point where stripped to its bare essentials, critically examined under a microscope that lists each element of this endeavour, separately, The Red Wolf Conspiracy could be a recipe for a mess of Titanic proportions:

Ancient artefacts, Assassin Spies, several evil villains with a Plan working together or maybe against each other, a King turned God, a Crazy infamous Captain, an Ambassador and his consort, Mages, different dimensions, a teenage girl who is a martial arts expert, a teenage boy who is cursed with a Gift for languages, a doctor with suspicious behaviour, giants, talking animals, a book that speaks only lies unless you have the never-seen-before 13th edition, a soap merchant, mermaids, fish-peoples, an Ixchel (think Tinker Bell- sized warriors) infestation, rats and pirates.

However – and this is all that stands between failure and success – mix them all together under the expertise of a skilled plotter who clearly has a plan of his own then add a few awesome details here and there and voila: mess it is no more. On the contrary, to join the author and his characters on their voyage is a most pleasurable way to cruise for a few hours.

With a complex world-building and an interesting plot, The Red Wolf Conspiracy is a great Fantasy novel and I really liked it. Starting with quite a few chapters of set-up and character introduction before they even embark on their journey, the plot expands and aggregates characters very slowly. I have seen reviews that mention how the setting up is rather slow but I actually really enjoyed the slow pacing of the first pages, I had more problems later on when the pacing changed abruptly but more on that later.

It is hard to give details of the plot because there is so much. I guess it is enough to say that there is not only the aforementioned Conspiracy but also a Conspiracy within the Conspiracy and a Counter-Conspiracy, all happening at the same time. And all that stands between the villains and their plan to plunge the world into war are a ragamuffin bunch of underdogs: the tarboy Pazel Pathkendle, whose only skill (or is it?) comes from a curse which allows him to understand any language but also leaves him with crippling headaches; the girl Tasha Isiq, daughter of the Ambassador to Sidpa , the chosen Bride to marry the enemy and bring peace to and who is the unwilling key figure (and yet, expendable) of the Conspiracy; Lady Driadelu, the Queen of the Ixchel; Hercol , former spy and Tasha’s tutor and his friend Ramachni, a mage who takes the form of a mink when in our dimension and the woken rat Felthrup. All of them are aware of parts of the master plan but only together can they put together the puzzle. All of these characters, to some extend or another, are relatable characters. I especially liked Pazel and Felthrup when they both fight adversity and strive to do their parts.

The book is not without its problems though. For all that the characters are interesting, they are never truly, deeply fleshed- out. Tasha is especially puzzling and not a bit annoying – I had huge problems with the fact that she is such an expert fighter. Not that I have anything against kick-ass female characters. Quite the contrary. It is just that it made little sense to me, that this specific character would be so adept at fighting. For starters, how exactly did she learn? Being a closeted daughter of an Ambassador, when exactly did she have time to have secret lessons and how was that kept a secret in the first place? Plus, at the book opens she has just spent two years in a school-convent without any chance to train and yet as soon as she is out, she is a master again. It required quite a lot of suspension of disbelief from me. There is also a romantic storyline with a very contrived love triangle.

Given the scope of the story and the plotting, and the sheer amount of characters – the ones listed above are the GOOD ones, there is a plethora of antagonists as well and rather clichéd they are, I am afraid – it is not a surprise that character development takes a backseat to the overall story; in all fairness there will be three more books in the series and the potential is undoubtedly there.

Another problem is the narrative itself. You see, it is rather schizophrenic. It alternates between omniscient narrator (even addressing the reader) and several third person limited. It is not necessarily bad but it did make me jump at times. I mentioned that in the beginning the author takes his sweet time with setting up and characters’ introductions but at some point in the book, things shift rather quickly. To the point where, instead of being privy to the happenings in the novel as we had been up to that point, all of a sudden things happen outside the pages and we learn about them through other characters. It is as though huge chunks were removed because the book had enough pages already – maybe an editing constriction?

I should also probably mention that my copy (a final copy, bought in the book store, not an ARC) was missing about 20 pages in a VERY IMPORTANT POINT. I was able to surmise what happened via characters’ conversations though but that was certainly frustrating. To the point where I yelled to the Gods “This is not happening!!!!”. That I actually screamed in agony over the loss of 20 out of 500 pages should probably tell you that in spite of the problems above, I enjoyed this fantastic adventure very much.

The bottom line is this: all of the problems I had with the book were duly noted as I read the book but they didn’t mar at all the experience of reading it. The overall plot with the conspiracy, all the political intrigue, THE TALKING RAT, the coming of age storylines of Tasha and Pazel were amazing. I sailed through The Red Wolf Conspiracy as though I was standing on the deck of a cruise ship with the breeze caressing my face and…you get the drift. I will read the next volume, The Rats and the Ruling Sea pronto and I swear by Poseidon’s Trident that there will be zero nautical references in that review.

Notable Quotes/ Parts: I like the opening paragraphs of chapter one:

It began, as every disaster in his life began, with a calm. The harbour and the village slept. The wind that had roared all night lay quelled by the headland; the bosun grew too sleepy to shout. But forty feet up the ratlines, Pazel Pathkendle had never been more awake.

He was freezing, to start with – a rogue wave had struck the bow at dusk, soaking eight boys and washing the ship’s dog into the hold, where it still yipped for rescue – but it wasn’t the cold that worried him…

You can read more here.

Additional Thoughts: The series has its own website with maps (I heart maps!), crew listings, details of the ship (with a sketch) plus details of the world, the calendar and even selections from the Merchant’s Polylex. These are the sort of details that I LOVE!

Verdict: The Red Wolf Conspiracy is a great mixture of fantasy and political intrigue, of adventure and romance. Although it is obviously the “first” in a series, it is certainly imaginative and exciting. And I can’t wait to read volume 2!

Reading next: Magic Under Glass by Jacklyn Dolamore