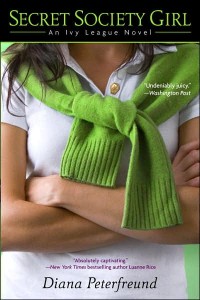 Why did I read this book: I had initially heard about this book from Li of the fabulous Me and My Books. After reading her glowing review of this book (and her subsequent praise of the series!), I knew I had to give it a try…and when I went to my local Target of all places and saw this book, I knew it was a sign. From there it languished on my TBR, until my recent trip provided the perfect opportunity to get it off the bench and on deck.

Summary: (from Amazon.com)
In a fabulous blend of the bestselling traditions of Prep and The Devil Wears Prada, Secret Society Girl takes us into the heart of the Ivy League’s ultraexclusive secret societies when a young woman is invited to join as one of their first female members.

So when Amy receives the distinctive black-lined invitation with the Rose & Grave seal, she’s blown away. Could they really mean her?

Whisked off into an initiation rite that’s a blend of Harry Potter and Alfred Hitchcock, Amy awakens the next day to a new reality and a whole new set of “friends”—from the gorgeous son of a conservative governor to an Afrocentric lesbian activist whose society name is Thorndike. And that’s when Amy starts to discover the truth about getting what you wish for. Because Rose & Grave is quickly taking her away from her familiar world of classes and keggers, fueling a feud, and undermining a very promising friendship with benefits. And that’s before Amy finds out that her first duty as a member of Rose & Grave is to take on a conspiracy of money and power that could, quite possibly, ruin her whole life.

A smart, sexy introduction to the life and times of a young woman in way over her head, Secret Society Girl is a charming and witty debut from a writer who knows her turf—and isn’t afraid to tell all….

I hereby confess, I wasn’t expecting to like this book as much as I did.

This isn’t the type of book I’d normally read, as my tastes run toward fantasy. And I wasn’t quite sold on the book blurb — but I trust Li and Angie, who both loved this book and this series. So, faced with a few days on a hot, white sand beach, what better time to dig in (oho, the puns, you love them!) to Secret Society Girl?

Amy Haskel is a junior undergrad at the fictional Eli University (modeled after Yale), an Ivy League School (for non-Americans, Ivy League schools are the oldest and arguably some of the best universities in the country; highly exclusive, horrendously expensive, and those accepted into these prestigious universities are either brilliant, filthy rich, or have some influential ties). Amy has a solid GPA and is the editor of a smaller literary journal on campus, and she fully expects to get “tapped” by Ink and Quill, the literary secret society (Being “tapped” and then inducted into a secret society is, apparently, a huge deal and vital for Ivy Leaguers’ success in the Real World as these societies provide invaluable connections to jobs, contacts, networking benefits, etc. For the non-American reader, I should reassure you that not all universities have secret societies; this is much more an east coast Ivy League school thing. But more on that later!). When she receives a mysterious phone call and goes to her society interview, however, Amy is baffled to discover she has been tapped by Rose and Grave, the big bad granddaddy of secret societies, the most powerful society in the country (if not the world). Amy’s shock is twofold: first, the “diggers” (Rose and Grave members) never tap women; second, Amy, while ambitious and successful, doesn’t exactly fit the digger superstar criteria. Amy’s digger class has a few more female taps, incurring the wrath of the older members of the society. When these patriarchs make it clear how enraged they are with the perversion of their society’s membership extended to women by throwing all the inductees (the seniors and junior tap class alike) out of the club, Amy and the diggirls decide to fight back.

As anyone who has read Diana Peterfreund’s work can attest, I could not put this book down. In fact, I finished it in a single day at the beach. In fact, every copy of this book should come with a warning: this book, detailing the inner workings of chauvinistic, elitist secret societies, is impossible to put down once started.

Ms. Peterfreund’s prose is undeniably crisp and airy. Amy narrates this book (written in the first person point of view, in the form of confessions) and it is her candor and wit carries the novel, even though the plotting is just so-so. This book isn’t exactly the War and Peace that Amy has been laboring over in lit, but it is highly enjoyable (and dare I say, far more readable than Tolstoy).

Amy is your everygirl overachiever. She doesn’t really know what she wants — from her career, her boyfriends, or her life. She knows that she needs to score a great job after graduation and that her summer internship at a publishing house in New York is the best way to pad her resume. But when it comes to things she actually, passionately desires, she doesn’t have a clue. She vacillates back and forth with her friend with benefits Brandon (who wants Amy to be his girlfriend), and she wavers in her resolve to stay in Rose and Grave…and I loved Amy all the more for her doubts and insecurities. Why? Because she felt completely real to me, and she’s a character I can relate to on a personal level. Yes, I know this is a reviewing no-no, and that a good reviewer will evaluate characters on literary merit as opposed to how well they can relate/want to be friends with said character — so sue me. I liked Amy. As a recent highly ambitious college grad who is still uncertain about what to do with the rest of my life, I can identify with Amy’s dilemma.

Besides my personal biases, I can also safely say that Amy is a well developed character who comes across as a bright young woman and a completely endearing heroine. I did wish that I knew more about Amy’s background (for instance, she quips at trust fund kids and the celebs that go to Eli, and makes it clear that she is neither rich or a “legacy”), but there is much room for those developments in subsequent books. I loved Amy’s sparkling narration, her dry wit, and her passionate ability to stand up for herself and her fellow diggirls when it comes down to the wire.

In contrast, the other characters aren’t nearly as fleshed out as Amy, but still are colorful and fresh enough to engage readers. There’s some simmering romance, the beginnings of wonderful friendships, and hardships galore, and I cannot wait to read more.

I hereby confess, there’s no way in hell I’d want to be in Rose and Grave.

One of the most fascinating things about this novel for me was the whole notion of Secret Societies. I went to UCLA, a large public university, which does have a rather active Greek scene but no secret societies. In Secret Society Girl, many things made me smile nostalgically – laundry woes, drinking games, one night stands and friends with benefits turning into complicated messes – but so much was completely alien to me. Being “tapped”, the whole initiation ritual and the subsequent drama with Rose and Grave was mind-boggling, and fascinating (think a cross between The Skulls and sorority movies like Sydney White). And all things considered, the lengths to which the patriarchs go to try to eliminate the female taps, there’s no way in hell I’d want to be part of such a misogynistic organization. I suppose that’s the biggest question I had with Secret Society Girl — why would any woman, especially the group of highly intelligent, confident, and ambitious women in this book, want to remain a part of Rose and Grave?

Of course, there are three more books in the series already written, so I’m sure I’ll get my answers soon enough. And I cannot wait to get my hands on the next few books to find out.

It all began on a day in late April of my junior year. I was in my dorm room, for once, trying to squeeze in a load of laundry between a tuna salad sandwich in the dining hall and my afternoon lecture on War and Peace, or as I like to think of it, WAP. (That’s not an acronym, by the way, but onomatopoeia. It’s the sound the hefty volume makes when I drop it on my desk.) Professor Muravcek’s lectures tended toward the impenetrable side and I wanted to spend some time brushing up on my notes. I was tilting toward a B in that class, which was unacceptable if I wanted to graduate with honors in the major. However, it was either laundry or rushing out that night to buy a new package of underwear. You know you’re desperate when trekking downtown to GAP Body is easier than waiting for a free dryer.

But neither Tide nor Tolstoy was in the cards for me that afternoon. I’d just finished disentangling my disentangling my fuchsia lace thong (Friday night date panties) from the legs of my “going out jeans” and was on my way out the door with a load of darks when the phone rang.

Crap. It was probably my mom. She seemed to have a divine sense of when I’d be in my room.

I balanced the basket on my hip and picked up the phone. “Hello?”

“You got her,” I said, shaking one of my balled-up gym socks free.

“Your presence is required at 750 College Street, room 400, at two o’clock this afternoon.”

Two o’clock was in fifteen minutes. “Who is this?”

You’re intrigued, aren’t you? The rest of the chapter is up on Diana Peterfreund’s website. Check out her blog, while you’re at it.

Additional Thoughts: The books of the Secret Society/Ivy League series are as follows: 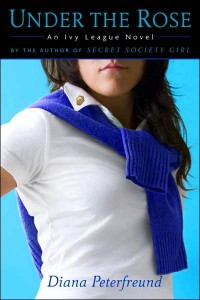 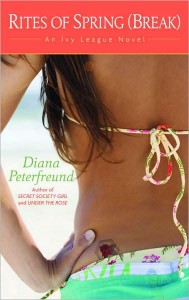 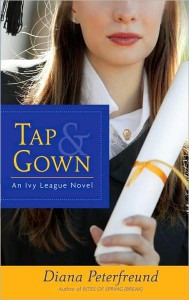 Secret Society Girl, Under the Rose, Rites of Spring (Break) and the forthcoming Tap and Gown, due out on May 19, 2009.

Verdict: Secret Society Girl is a delightful, highly enjoyable read, and the perfect summer read. I cannot wait to continue with the series!

Reading Next: The Magicians and Mrs. Quent by Galen Beckett