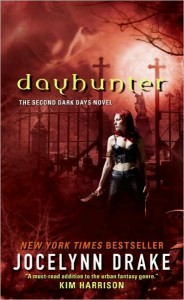 Stand alone or series: book 2 in the Dark Days series

Why did I read the book: I read and reviewed the first book in the series and I loved it. It was a no-brainer that I would read this one as well, and when the author offered an ARC, I honestly did a happy dance.

Summary: A new day dawns blood red
A master of fire, Mira is the last hope for the world. For centuries she has secretly enforced the history-altering edicts of the Triad. Now she and her unlikely ally—the human vampire hunter, Danaus—have come to Venice, home of the nightwalker rulers. But there is no safety in the ancient city, for the threat of conflict is in the wind . . . with unholy alliances and earth-shattering betrayals taking hideous form in the shadows.
Banished for eons beyond the world’s boundaries, the malevolent naturi prepare to feed once again upon a vulnerable earth—and treachery is opening wide the portal that will enable their dread re-emergence. The great battle that has always been Mira’s destiny is looming, and she must remain powerful in the face of a shocking revelation: that Danaus, the only creature she dares to trust, is something more than the man he claims to be . . .

Previously in the Dark days series: Nightwalkers and humans are in danger of being exterminated by a powerful race known as naturi. The naturi have been sealed away in another dimension and are trying to break free. Human sacrifices are needed in order to break the seal and Mira, a powerful Nightwalker and her (for now) ally Nightwalker hunter Danaus are on the case trying to keep them from achieving their goal by getting together the team that created the first seal in the past, known as the triad. Things escalate to a full-blown conflict between some of nature and Mira-Danaus where they both learn that they combine their unique powers and essentially EXTERMINATE naturi and their souls with it. Book one ends with Mira and her new charge, Tristan, exhausted and hungry.

Dayhunter picks up the story where we left off: Mira and Tristan needing to feed and recover from their numerous wounds before they can go to Venice along with Danuas, to meet the Coven and find out what needs to be done next.

Once in Venice, both get tangled up in Coven politics, power plays between some of the most powerful and Ancient Nightwalkers out there. From finding out that the Coven – now with an empty seat, up for grabs – may or may not be in cahoots with the terrible naturi to trying to decide what to do and HOW to stop the naturi whilst trying to figure out who is friend or foe: from the moment the book opens to the very final page, the action hardly ever falters as we follow Mira and Danaus in their attempt at finding out what the heck is going and how to deal with what they find out.

To expand on the incredibly intricate plot is to spoil way too much so I will say no more on the subject. However, as complex and elaborate as the plotting can get , the brilliance of these books is in its protagonist : Mira and the way she acts and thinks.

Mira NEVER knows what the hell is going to happen next as the action is pretty much, on the go go go with decisions being made on the spot. Hard decisions, with implications that can be deadly for all concerned. Mira can be at the same time, a sophisticated thinker who can deal with the most crafty political plays of the Nightwalkers and a kick-ass warrior willing to kill and to die for what she believes. And what she believes is this: the naturi need to be exterminated at any cost.

Whereas this belief does not wilt one iota, Mira is torn by doubt regarding everything else. Who to trust , for example: who in the Coven has the Nightwalkers’ interests in their hearts? What about Sadira and Jabari, her makers? What exactly do they want from her? Another interesting point is the ongoing discussion that underlines Mira and Danaus’ relationship about the nature of evil. Mira wants to save her race and she is adamant that evil is a moral decision more than an intrinsic quality that comes with being a Nightwalker. In this book, the discussion evolves as we are thrown in the midst of the Nightwalker’s Coven and evil is pretty much everywhere – specially in the way that the most powerful nightwalkers treat the weaker ones. Mira has some revelations and self-realisations in this book that may point to a darker trait in her own character that she may not want to face but which is nonetheless THERE.

Doubt is also the key work for Danaus’ character arc. Danaus has, at first, an understanding of the world in black and white: good x evil. However the more time he spends with Mira, the more these assumptions seems to be wrong and even though we are not privy of his thoughts, which makes Danaus a most fascinating and mysterious character, Jocelynn Drake does an excellent work at unveiling his pain and doubt to the reader via Mira’s connection to him.

Speaking of connection, at the end of Nightwalker we learned that not only Mira is controlled by her two Makers but also and strangely so, by Danaus as well. In Dayhunter , this control is explained and painfully understood by Mira – another reason for doubt and most importantly fear. For a character who thrives in independence , to be potentially controlled by three people she does not know if she can truly trust, is as abominable as it gets. Having said that, the fact that it is Danaus, a hunter of her species who has her back for the most of the book, is certainly confusing but it makes for compelling reading: not only for the unspoken attraction that certainly exists but is denied by both but for the, again I use this word, potential for angst and power. Since both Mira and Danaus are two of the most powerful beings in existent who together can be pretty much invincible but with a cost that neither may be prepared to pay.

But I do have one criticism that I need to bring up: the info dump. At times, the action was halted so that Mira could go back and explain what was happening. Since Mira is the narrator and well, she pretty much knows what is going on, I can only surmise that the info dump is for the benefit of the reader – a catching up, a “the story so far” that I felt slowed the story and it frustrated me when it happened at the thick of action – sometimes it happened even in the middle of a fight! I think these books, with their incredibly complex world building, would gain from having a summary of what happened previously and a glossary so that readers would not be lost and there will be no need for the info dump.

In the end of Dayhunter, things have escalated to as point of no return but thankfully they now have some time to see things through and come up with a plan for the next step. Then, Danaus and Mira can go back to the business of killing each other. Here is hoping that “killing” is just a code for “let’s get it on”.

Notable Quotes/ Part: The scene in the church between Danaus and Mira when they have an amazing talk about evil and good and the nature of souls and when we finally learn who (what?) Danaus is.

Verdict: Dayhunter is as good as its predecessor, Nightwalker. The Dark Days is a strong series and I can’t wait to read the next instalment.

Reading next: The Laurentine Spy by Emily Gee.

Over at Kirkus: The Last Policeman by Ben H. Winters