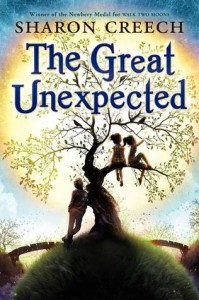 I had big thoughts to match the big wind. I wondered if we find the people we need when we need them. I wondered if we attract our future by some sort of invisible force, or if we are drawn to it by a similar force. I felt I was turning a corner and that change was afoot.

In the little town of Blackbird Tree live two orphan girls: one Naomi Deane, brimming with curiosity, and her best friend, Lizzie Scatterding, who could talk the ears off a cornfield. Naomi has a knack for being around when trouble happens. For she knows all the peculiar people in town–like Crazy Cora and Witch Wiggins and Mr. Farley. But then, one day, a boy drops out of a tree. The strangely charming Finn boy. Then the Dingle Dangle man appears, asking all kinds of questions. Curious surprises are revealed–three locked trunks, a pair of rooks, a crooked bridge, and that boy. Soon Naomi and Lizzie find themselves zooming toward a future neither could ever have imagined. Meanwhile, on a grand estate across the ocean, an old lady whose heart has been deceived concocts a plan. . . .

As two very different worlds are woven together, Newbery Medal winner Sharon Creech celebrates the gossamer thread that connects us all, and the great and unexpected gifts of love, friendship, and forgiveness.

Why did I read this book: I’ve recently read (and loved) my first Sharon Creech book (Walk Two Moons) and have become a fan.

Daughter: I’m going to be a dolphin.
Mother: Is that so?
Daughter: Yes. I will live in the ocean.
Mother: For real?
Daughter: What is ‘real’?

The Great Unexpected features a story that may be about many things. It may be about the truth. And about what is real (or not). It is perhaps about coincidences. Maybe about connections. Definitely about rooks, though. And decidedly about friendship.

It starts as a young boy named Finn literally and unexpectedly falls into the lives of two good friends Naomi and Lizzie, both foster children living in the small town of Blackbird Tree. The tale then unravels between the two friends, other folks that live in Blackbird Tree, this mysteriously alluring boy (he is a new Finn-boy for a new generation of girls) and a visitor from overseas. Strange events connect Blackbird Tree and many of its inhabitants with another town and its people – all the way across the pond in Ireland – and the two stories run parallel.

Naomi is the main narrator: she carries terrible scars on her arm from a dog’s attack – the same attack that killed her father and left her an orphan. Lizzie, her best friend, hopes to be adopted by her foster family. They are not unique in Blackbird Tree though. There is a really great scene that takes place at their school when their teacher asks the kids to talk about their families – the teacher cancels the assignment after only five presentations because she can’t cope with all the tragedy. This is Naomi’s reaction to this:

“We didn’t think we were tragic. We thought we were normal. All any of us wanted was for somebody to care about us, and if we couldn’t have that, then at least somebody who wouldn’t be too mean and who would feed us from time to time. I suppose the only thing I wanted beyond that was that it wouldn’t be my fault. What “it” was, I couldn’t say. But “it” was usually bad and always unexpected.”

This scene is great because it is a perfect indicative of the type of book this is: one that deals with emotional strain with a lot of humour as well as depth. One that acknowledges that children have different ways to look at things and that they are not necessarily wrong just because they are children or because they are imbued with a certain amount of innocence.

Thus, The Great Unexpected is a lovely little story. It is funny and the relationship between the two girls as well as their relationship with those around them is endearing. I loved the recognition that sometimes one can love someone else very much and yet still be deeply annoyed by them. There are several little stories and small little truths peppered throughout as well as the acknowledgement of the power of storytelling (of making stories and of being part of them). It features different kinds of families and the bonds that are built around them.

That said, as lovely as it is, The Great Unexpected is not a perfect book. Thematically speaking, there is perhaps a too great reliance on the power of coincidences. In terms of narrative, there are far too many different strands that although connecting perfectly –almost too perfectly, as a matter of fact – in the end, may be too disjointed when one thinks of the whole. It is definitely too reliant on stereotypes about the “magical” Irish.

But even though I see the problems above and I am most certainly not a fan of magical realism and often have a hard time connecting to stories that feature it, it is testament to the competence of Sharon Creech’s storytelling and the power of the thematic core of this book that I found myself enjoying it a huge deal: THAT is the real “great unexpected” at play here.

Reading Next: Stormdancer by Jay Kristoff