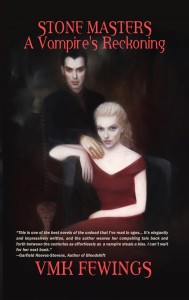 Stand alone or series: A stand alone novel, but with an upcoming prequel titled Orpheus: A Vampire’s Rise planned for release in February 2010.

Why did I read this book: We received a review request from the author, and after checking out the interesting summary, I decided to give this book a go. Plus, we like to give some of the smaller independent press books some action.

Summary: (from VMKFewings.com)
What if your family held an ancient secret?

A secret passed down from one generation to the next. An enigma so great that it would shatter your world, change the fabric of your life.

What if the time had come for you to be initiated into that secret life?

Lord Jadeon Artimas, heir to St. Michael’s Mount in Cornwall, discovers his family belongs to a clandestine order known as the Stone Masters: A collection of brave men whose sole, sacred duty is to hunt down and kill the mythical creatures of the night, known as vampires. Jadeon’s epic journey draws him into the underworld that stretches across lifetimes teeming with coded messages and castles with revelations in each mysterious passageway.

Jadeon and Alex are brothers, heirs to a lordship in Cornwall, but their family legacy is much darker than these two young boys could ever have imagined. Though their father is a stern, cold man, the boys enjoy a happy sort of childhood especially with their playmate and neighbor Catherine. The three sneak out at night for midnight swims and are inseparable — until one fateful night, when Jadeon hears tortured screams and sees his father emerge from a secret room within their stone castle, masked and leading a beautiful, struggling woman into the darkness. Eight years later, a new presence enters the lives of the brothers. As Jadeon is melancholy after his longtime love Catherine decides to take up the cloth, Alex is befriended by the charismatic and mysterious Orpheus. Jadeon soon learns the true nature of his family legacy: he is the next in a long line of members of the Keepers of the Stones, an organization devoted to finding and killing vampires. Unfortunately for the Artimas heirs, Orpheus is an ancient vampire with a grudge against the Stone Masters. That beautiful woman from years before tortured by the boys’ father was Orpheus’s love, and he is out for blood. Manipulating Alex and then transforming both brothers into vampires themselves, Orpheus exacts vengeance on the men that killed his love and repays that cruelty in kind by stealing Jadeon’s Catherine from the convent and enslaving her as a vampire under his thrall. Now, centuries later, though thwarted at every turn, Jadeon must find Orpheus not only to save his childhood love, but to protect Alex from Orpheus’s cruel games.

Stone Masters: A Vampire’s Reckoning is a darkly gothic vampire saga, spanning centuries in a psychological game of cat and mouse. This book is more in the vein of Anne Rice than Stephenie Meyer, more a sadistic and twisted horror than endearing love story. A Vampire’s Reckoning is strongest in its narration, alternating chapters with the perspectives of Jadeon and Orpheus, allowing insight to the respectively idealistic and cruel characters. This clever, sparkling narration adds a tension to the story, bringing life to these undead vampires. While both Jadeon as the tragic, flawed hero character and poor confused Alex are wonderfully drawn, it is the angry, villainous Orpheus that stands out in his mastermind quest for retribution. His games of control, especially with Alex are horrific (a certain ‘torture’ scene comes to mind), but darkly enthralling. Whereas Jadeon’s emo attitude wears on you after a couple hundred years, Orpheus is always there with a quip and some depraved mind game — which, when it comes down to it, is a much more fun way to spend immortality!

So far as the plotting goes, I have to applaud Ms. Fewings for her ability to deftly move the story across two distinctly different eras — from the quiet eighteenth century Cornwall to the noise and chaos of twenty-first century London. While the traditionalist take on vampire lore (blood drinking, sunlight fearing, super sexy) isn’t anything to write home about, I did appreciate the presence of the Stone Masters and how their single-minded desire to uproot and destroy all vampires, exposing the cruelty on both the sides of the vampires and their hunters. I also appreciated the interesting spin with the addition of Stonehenge as the site where the Stone Masters take their captured vampires in order to destroy them and spread their ashes.

Overall, I enjoyed A Vampire’s Reckoning, and found it to be an entertaining and readable novel. While certainly not without a large share of debut novel shakiness, especially in terms of story pacing and an ending I cannot say I much liked, my real qualm is with the dialogue of the story. While the descriptions are vivid and depict each time frame wonderfully, the dialogue between characters especially in the 1700s came across as inauthentic because of modern phrasings and mannerisms. For example, in one scene where Jadeon — eighteen years old, Lord heir to St. Michael’s Mount in 1797 — discovers the Stone Masters’ room, he exclaims:

It’s not only this one instance either — Jadeon uses phrases like “I would ask around,” or when describing his father states:

Lord Artimas was an intimidating presence. At 6’3″ he cut a striking figure of a man…

It’s jarring, especially in this older context and kep pulling me out of the story by virtue of me noticing these modern sensibilities. Other than this problem (which easily can be fixed with some editing), my only other complaint would be that the dialogue itself is flat and clumsy, only more noticeable because of the strong internal dialogue of each narrator and otherwise strong characterization.

Despite these problems, the story itself is engaging. Ms. Fewings has a knack for characters and begins telling a good story, even if the novel does falter at the ending — and I expect her skill will only grow with each new work. A good debut effort, and one that I would recommend to any fan of vampire fiction, especially of the darker variety.

Notable Quotes/Parts: I liked seeing the more emotional side of Orpheus, who does love Alex in his own twisted way.

I pushed some strands of Alex’s sweat-soaked hair out of his eyes, reconsidering whether I could cope with leaving him behind. “Do you remember anything of our conversation the other night?” I asked him.

“For some reason, things are still a little fuzzy. I don’t really remember much about the night of the ball,” Alex said.

“Taking a small amount of my blood can do that,” I said.

“Last night, we shared a moment.”

“I know, it’s one of those things in life where an explanation inadequately explains the reality.”

“Perhaps I could show you?”

He stared at me with his large blue eyes.

“Alex, it would be sacrilege for me to let you grow old.”

Additional Thoughts: VMK Fewings’s website is now up and running! You can visit the author’s page HERE to find out more about Stone Masters: A Vampire’s Reckoning or the upcoming Orpheus: A Vampire’s Rise.

Verdict: While not without its fair share of flaws, most notably with the awkward dialogue and the stumbling story especially in its conclusion, Stone Masters: A Vampire’s Reckoning is an entertaining read and a good effort from this debut author. I am looking forward to the prequel.

Reading Next: Drood by Dan Simmons