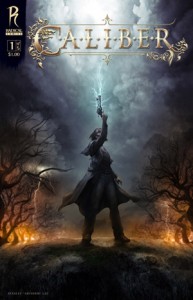 Stand Alone or Series: The Graphic Novel is a collection of a 5-issue miniseries.

Why Did I Read The Book: I saw this review at Fantasy Book Critic and I just HAD to have it: it is Excalibur! in the West!

Caliber is a retelling of King Arthur set in the Pacific Northwest circa 19th century in which the Sword Excalibur is replaced by a gun that only one man can use. A French- Indian Shaman, known as Whitefeather has the mission of finding this man, a mission that has taken over his life. When he has a visions that points him to the right man, he takes the gun to him and sure as hell he can use it, but with horrible consequences. The man dies. Years later, his only son, one Arthur Pendergon comes back accompanied by his uncle and cousin to find his old town taken by out-laws, his childhood friend Gwen working at the saloon and Chinese Immigrant as well as Native Americans being ill-treated by the town’s rich people. Whitefeather, who had become a shadow of himself has set up a shooting stand in which people get to try and shoot The Gun but obviously no one has even been able to. Until one day, young Arthur, in the middle of a fight, picks it up and shoots with it. Whitefeather rescues him and takes him away to start his mentoring so that with the use of The Gun, Arthur can become the upholder of the Law. In the midst of it all, there is a bit of time for romance between Arthur and Gwen; his revenge against his father’s killing and Whitefeather’s first face-off with his old flame Morgan.

Caliber contains the first 5 issues of this new series and combined they are clearly, a set up for things to come much in the steps of the old Arthurian stories. If you are familiar with King Arthur’s legends, you will probably recognise this story arc , as it is a play by play of the finding of Excalibur and how Arthur becomes King – or in this case, sheriff.

The best thing about Caliber is without a shadow of a doubt , the artwork. It is STUNNING and the reason why I picked it up in the first place. I was literally drooling over the pages , highly impressed with the quality and sheer beauty of the very real, almost photographic images. (Although in all honesty, the transition between some of the panels was highly confusing and abrupt but this is more a problem of the writing than of the artwork, I am just saying).

The premise is not bad either , although not entirely original, as it is after all, a story we all know about – and it is very easy to recognise all the characters and their motivations – there is Arthur and Whitefeather, but also Gwen and Lance Lake and other characters that will surely become the Knight of the Round Table (which also makes an appearance) . But the fact that the story is transported to Old Western America adds a bit of an interesting twist to the legend. I am a huge fan of Westerns and I think it worked really well as the setting for this story, specially for the fact that instead of the usual dry-desert Western, Caliber is set in the Pacific Northwest , a more lush, cold setting that resembles, at least a little bit, the setting of the original stories.

Unfortunately I wasn’t very keen on the writing itself or the underlying moral lessons of the comics. Whitefeather teaches Arthur about the “Law” and how he must uphold it and be true to it and bring the Law to everyone. Mind you, I have no problems whatsoever to see Arthur as the “one” to bring JUSTICE to all, but to my mind there is a difference between Justice and Law and that was the reason why I was bugged by the tone of the book. For example, Whitefeather tells Arthur:

“The thing I can teach you is NOT about using the gun. It is about using The Law. The gun obeys the law…when you master the Law…you won’t need to use the gun.…”

I completely agree with the sentiment behind the above statement but I couldn’t help but to feel preached at. Specially when Whitefeather starts throwing at Arthur concepts such as Habeas Corpus and how it is one of the “main protections against unjust or unlawful imprisonment by the state” which is all well and dandy but also extremely restricted to a place and time – my point being: King Arthur is a legend of Justice and Honour and I believe these concepts go beyond any particular age or setting. They certainly go beyond the Laws of the USA – but then again, this is just me , the non-American being nitpicky about something that is completely crazy – I mean, if the story is set in the USA and it is about Justice it makes sense that the Sheriff will uphold the USA’s Law, doesn’t it?

In any case, at the end of the volume, there is an interview with the writer in which he explains how these first 5 volumes are nothing but set-up and the next issues will pick up the story about six years later and how he has ideas for all characters. With the artwork, the setting and promise of Great Things to Come, I will definitely at least give the next volume a try.

Notable Quotes/ Parts: The final showdown with the characters around King Arthur fighting the baddies in the saloon was pretty darn awesome! The Chinese chick(friends with Gwen) and her kung-fu-like mojo was so cool. I hope she becomes a regular in the series.

Additional Thoughts: Since the artwork is the best thing about the Graphic Novel, here is a taste: 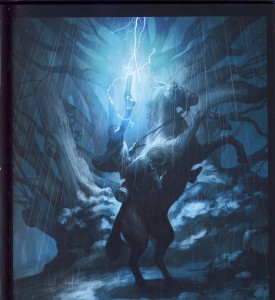 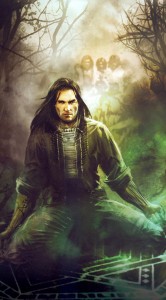 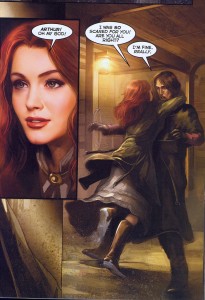 You can see more at the Radical Comics website

Verdict: FANTASTIC artwork, cool setting and premise….but the writing was preachy and choppy. All in all, there is promise.

Rating: 6 Good. Recommended with Reservations. If I was to rate the artwork alone, it would be a perfect 10.

Reading Next: Talk me Down by Victoria Dahl

Book Review: Out of the Easy by Ruta Sepetys