Graeme runs a most fantastic (and very respected) blog: full of in-depth reviews of mostly Fantasy and Sci-fi books (although he tried his hand at reading Paranormal Romance but that didn’t work out quite so well), interviews, news and giveaways. He also writes the Retro Classic columns full of goodies and oldies.Graeme is one of the bloggers that made us realise we MUST read more of the Fantasy novels out there. 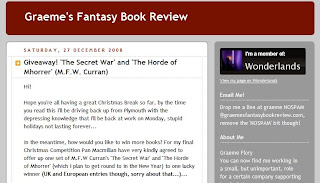 Thanks to Thea and Ana for inviting me along to talk about, well… here’s the thing… I’m writing this post on the 21st of December, it’s not going to be posted here for another week so you’d think that’s plenty of time wouldn’t you? Wouldn’t you? Well, it would be loads of time if you knew what you were going to write about…
I could give you loads of excuses about how busy everything gets in the run-up to Christmas but the bottom line is I’m sat here right now stretching out this sentence as long as I can because I’ve got no idea what’s going to come after it!

*One shot of whisky later…*

Ok, I think I’ve got it. Ever since I was knee high to a grasshopper it’s always been the ‘Fantasy’ shelf in the bookstore that has drawn me in. No not that fantasy; the fantasy with dragons and stuff. You know what I mean; brave knights, thieves with hearts of gold, Dark Lords in their sinister looking Dark Towers. These days I’m still into the same kind of thing but now I like to pick up books where the knight is actually a real coward (and a bit of a bastard to boot), the thief is stealing for himself (not the poor) and the Dark Lord lives in a Dark Tower because, well… it’s the done thing!

With all this in mind let me introduce you to a few books that I’ve really enjoyed this year. You may have met them already but they’re all really cool and the kind of book that it’s always good to bump into again… ;o) 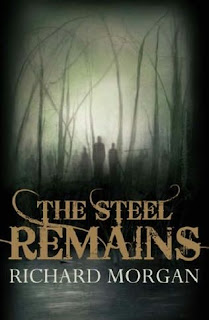 If you’re looking for a fantasy novel that’s completely in your face and brimming with attitude what do you do? I’ll tell you what you do, you pick up a fantasy novel by a guy who has written award winning sci-fi that’s completely in your face and full of attitude!
‘The Steel Remains’ is first up in Richard Morgan’s new series and although you may have seen it all before in other fantasy fiction it still sets the bar pretty high. Read the first line and see what I mean…

“When a man you know to be of sound mind tells you his recently deceased mother has just tried to climb in his bedroom window and eat him, you only have two basic options.”

I’m not going to tell you what those options are, I think you should pick up the book and see for yourselves. It’s worth it. 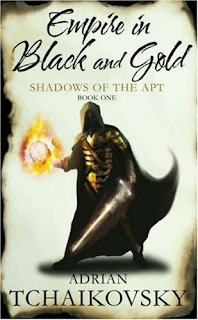 If there’s one thing that freaks me out more than anything else it’s wasps. I’ve never been stung by a wasp but I hate them anyway. If anyone can tell me one positive thing about wasps then I’d be very surprised! Imagine a book then where the human characters all take on insect characteristics and the big threat is an empire of human ‘wasps’ that can fly and pack a pretty mean sting…
Fantasy fiction is big on trilogies (or series that are even longer) so it will be no surprise to learn that ‘Empire in Black and Gold’ is the opening chapter in a trilogy. It’s worth sticking around for though if you like your fantasy full of skulduggery in back alleys, espionage in court and loads of swashbuckling goodness. The sequel, ‘Dragonfly Falling’, is out next month and I’m pretty much going to be first in line… 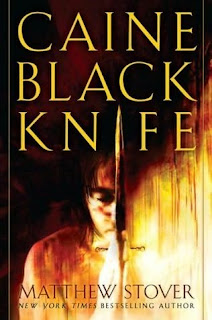 I’ve been hanging around Sci-fi/Fantasy forums for a few years now (What? I don’t find work a particularly fulfilling way to spend my day…) and one of the names that kept cropping up was Matthew Stover and his ‘Caine’ series. The first two books are fairly difficult to get hold of (unless you want to pay £40 on Amazon that is, I don’t…) but I got a chance to read ‘Caine Black Knife’ this year and I’m glad I did. It’s part sci-fi, part fantasy, part detective noir and all about the nastiest piece of work anti-hero I think you’re ever likely to meet. And the great thing is that even though it’s the third book in a series there’s enough background given that you can pick this one and get going straight away. Now all I need to do is find cheap copies of ‘Heroes Die’ and ‘Blade of Tyshalle’…

‘The House of the Stag’ – Kage Baker 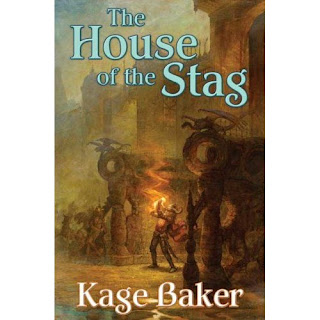 Remember earlier when I talking about Dark Lords living in a sinister and foreboding tower because they had a reputation to think about? Well, this is the book I was thinking about when I wrote that…
‘The House of the Stag’ is a rags to riches tale of a Dark Lord that involves slavery, gladiatorial games, wizards living in a mountain and beauty care products. It’s both funny and moving at the same time, give it a go. 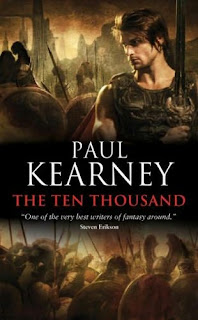 Paul Kearney is another author that I’d heard lots about but never got round to picking up until a few months ago when I read ‘The Ten Thousand’. The tale of a coup gone wrong and the (guess how many) mercenaries that have to fight their way back across an entire continent that would rather see them dead…
‘The Ten Thousand’ has its roots in real events, that happened back in the time of antiquity (I think, I’m no historian). If you liked the film ‘300’ then that’s pretty much what you can expect from ‘The Ten Thousand’ only a lot more intense. How many times does three hundred go into ten thousand anyway…?

These are just a few books that jumped out at me over the course of 2008, there were a lot more but I really need to go and help the wife prepare for Christmas… If you’re looking for a cool fantasy book to read then feel free to stop over at my blog and see if there’s anything that takes your fancy. When you’re done there, have a look at the links to similar blogs and see what they think. There’s so much good stuff out there and now is as good a time as any to jump straight in and start reading ;o)

Which reminds me… Look out for Peter Brett’s ‘The Desert Spear’, Stephen Deas’ ‘The Adamantine Palace’ and Joe Abercrombie’s ‘Best Served Cold’ (amongst others) in 2009. They’re all worth a look… 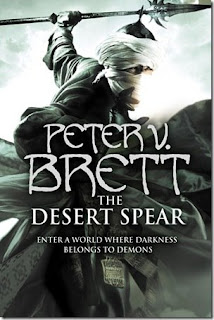 Next on Smugglivus: Jessica of Racy Romance Reviews