Aidan’s blog offers some great creative features–our favorites include his Pile O’ Shame (in which he confesses which books the world holds so highly regarded, yet he cannot read through–and invites readers to share as well), and his articles, tackling everything from ads (check out his article “What Are Bloggers Worth?”) to blogging standards to ruminations on reviews. 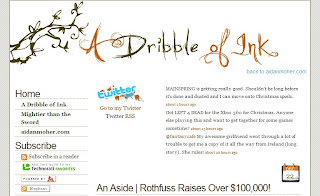 2008 was the first full year for A Dribble of Ink and it served up both a lot of challenges and a lot of rewarding moments. As a fledgling blog started in ’07, I felt that I had a lot to prove and a good chance to carve out a place among the heavy hitters of the blogosphere.

Did I succeed? That’s for the readers to decide, but personally I feel like A Dribble of Ink, and myself as a blogger, grew in leaps and bounds over the previous year.

One of the biggest moments for me in 2008 came in June, when I re-posted SFX Magazine’s list of the top 100 SFF authors of all time, as voted on by their readers. Little did I know that this quick aside (secretly written at work, unknown to my boss) would lead to over 2,700 views A Dribble of Ink in one day. Why so many? Well, Neil Gaiman, who ranked third, saw the list and posted about it on his blog. I nearly shit myself when I saw the referral from his web site; in my books Gaiman is about as close to a god that a living mortal can get. That day, above all others, really helped me see what all the hard work in maintaining A Dribble of Ink is worth. Thanks to Gaiman, and all the people who discovered the blog because of his link, I broke a big milestone in 2008: 100k views. In retrospect, I think I owe Mr. Gaiman a hell of a thank you. 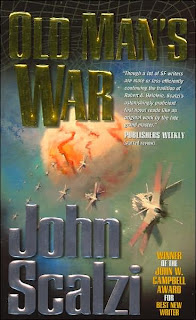 There’s been a lot of debate on message boards about the value of 2008 in the grand scheme of SFF literature, with the general consensus being that it wasn’t quite up to the level of 2006 or 2007. Be that as it may, I can’t help but feel that it was a hell of a year for me and saw me pick up some novels that would easily land on my list of all time favourites. I made a concentrated effort to expand the breadth of my reading, particularly into Science Fiction, and found a great cache of new authors this year. John Scalzi (Old Man’s War, The Ghost Brigade and The Last Colony) is easily one of the most entertaining writers I’ve discovered in the last few years and I eagerly devoured every novel of his I could get my hands on.

Oddly, most of the novels I read this year weren’t actually released in 2008…. Of those that I did read, the one that stood out the most was Greg Keyes’ The Born Queen, the final volume in The Kingdoms of Thorn and Bone, an Epic Fantasy quadrology. As I mentioned in my review, I genuinely feel that Keyes is the most criminally under read author in Epic Fantasy today. Not
only did he manage to avoid the Jordan/Goodkind/Martin trap of falling into an endlessly long series of novels, he managed to wrap it up in only four volumes and does so in an extremely satisfying manner. When I finished the third volume in the cycle, The Blood Knight, I didn’t think there was a chance in hell that Keyes would be able to tie up all the loose ends in only one more volume. He does.

Equally impressive was Joe Abercrombie’s Last Argument of Kings, the concluding volume of his debut trilogy, The First Law. Abercrombie took all the tropes established in his first two novels and completely flipped them on their head, throwing me for a loop every time I thought I had a grip on the story. From the brutal battles, to the perfectly sloppy ending, to the as-fucked-up-as-real-life love stories, Abercrombie wraps his trilogy up with aplomb. 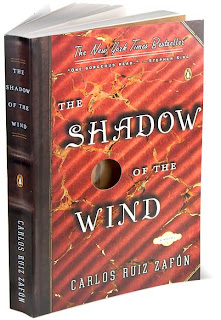 Foremost among the novels I read this year, and perhaps my favourite novel ever, was Carlos Ruiz Zafón’s The Shadow of the Wind. Zafón’s novel is hauntingly beautiful, eloquently terrifying and hopelessly romantic all at once and has stuck with me like few novels manage to. If you’re ever feeling in a slump, not able to find anything to read, pick up The Shadow of the Wind, you won’t be disappointed. Zafón has written a prequel called The Angel’s Game, which was published in its original language in 2008, and the English translation, coming Spring 2009, is easily my most anticipated novel of the year (even above such heavy hitters as Patrick Rothfuss’ The Wise Man’s Fear, Abercrombie’s Best Served Cold and Martin’s (fingers crossed) A Dance with Dragons.

2008 wasn’t without its controversy, either. I set a bit of a wildfire in the blogosphere when I wrote a review of Paul Kearney’s The Ten Thousand; the catch being that I didn’t actually finish the novel. Kearney dropped by and had a few stern (and fiery) words about it and a bit of a shitstorm ensued. Kearney and I settled our differences, and I even took a second look at the novel, but there were many lessons to be learned throughout the whole experience. No one thing has made me feel closer to the actual industry than the reaction to that review. Kearney even wrote a reaction to the review and mentioned how it had a small part in getting him to think about his approach to writing. 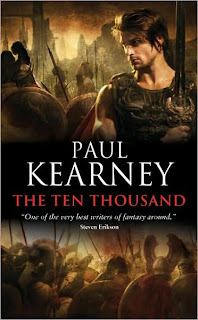 Perhaps most rewarding, though, was when a commenter on OF Blog of the Fallen called an article I had written ‘utter tripe’. I’ve always supposed that one of the reasons I got into blogging was to reach out to people and elicit emotion within them; whether they agree with me or not, I love to see discussion burning wild among bloggers and readers. If someone hated something I wrote enough to call it tripe, I obviously found the right button to press. An odd choice for a highlight, but one that’s stuck with me in the months since.

Next on Smugglivus: Heather of The Galaxy Express