Who: Courtney Summers, author of emotionally-wrenching contemporary young adult novels, including this year’s release of bindup What Goes Around and one of Thea’s favorite zombie novels ever, This is Not a Test. 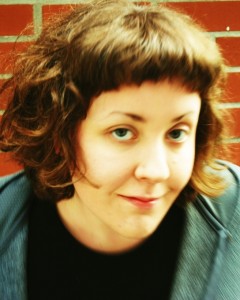 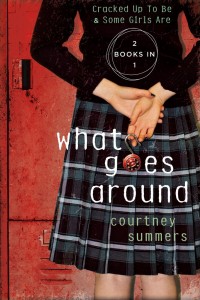 Give it up for Courtney, folks!

Smugglivus! I love this time of year! Thank you so much for inviting me to participate again, Ana and Thea! It’s always fun to step back and reflect on what would top a personal Best of List for the year and discovering that’s… not as easy as I always assume it’s going to be be. When so much good stuff gets produced these days, HOW TO CHOOSE THE MOST NOTABLE? Objectively, it’s not the worst problem to have–in fact it might just be one of the best–but it’s hard! (Things I learned: I did not watch enough movies at all this year to warrant the mention of a single one on this list… sooo if you are reading this and have a must-see movie of 2013, please tell me.) I busted my brain a little bit BUT it was totally worth it and without further ado, I’m so excited to share a few of my favourite things from 2013! 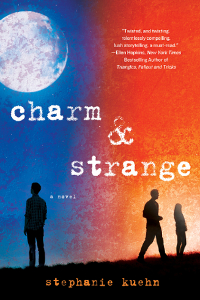 Here, I must tip my hat to Stephanie Kuehn, for her dark, thoughtful and edgy novel, Charm & Strange which came out June of this year. It follows a boy, Win, with a tragic past and… you know what? The less I say, the better. All you need to know is that when you pick this book up–and you should definitely pick this book up–you are in for a character and story that you won’t forget. It will stay with you. The prose is haunting and gorgeous. Stephanie is an incredibly skilled writer and this shows in the effortless way she makes us part of Win’s world. His pain and his heart are fully and wonderfully realized. Needless to say, I’m looking forward to her sophomore release, Complicit, in 2014.

FAVOURITE TV SHOW
with so much room for improvement as of my writing this, it technically shouldn’t even be on the list

The Walking Dead has zombies in it and so it appeals to me. If you don’t watch The Walking Dead, it’s about a Sheriff named Rick Grimes who gets shot and when he wakes up in the hospital after enough time has passed for a zombie apocalypse to be well under way, a zombie apocalypse is well under way! The first few episodes follow his quest to reunite with his family and every episode after he does chronicles how much greasier his hair gets because my goodness. I love The Walking Dead because it is brutal and relentless and feels real. It forces you to get all attached to the characters before snatching them away, generally in a cruel flurry of teeth and guts and blood. What’s not to love?

WELL. About that. Unfortunately, The Walking Dead also drives me crazy because it’s not great at writing women. Starting with Lori, who was complicated and tough the first season and then got progressively more awful and ridiculous as the second season wore on until she was finally (spoilers ahead!) killed off in the third. It’s like she was stripped of emotional depth to create some for Rick and it makes me angry because I fell for it! Ugh. And Andrea. I loved how Andrea made as many mistakes as say, Merle, but also got to die for her sins like Lori, because it seems redemptive arcs are only for guys and the most women can count on is being killed or exiled for their missteps? If I even get started on what they may or may not be doing to Carol right now, we will be here until the new year. If Carol’s arc hasn’t broken the pattern of how The Walking Dead writes their ladies by the time this post goes up, I hope it will in 2014. I’ll admit it, putting this on my fav lists for Smugglivus is a show of faith that they’ll turn things around. If they don’t, at least I will be able to look back on this post and bitterly remember there was a time it WAS my favourite. (sob)

It’s really hard to pick a favourite song of 2013, but one of the most notable (for me) was Young and Beautiful (DH Orchestral Version) by Lana Del Rey, which was for The Great Gatsby soundtrack which was probably one of the best albums released this year too, in my opinion! I LOVE Lana Del Rey. And I like to make jokes about how her songs are all about fast cars, old men, drugs, sex, fame, and empty Hollywood pursuits but… that’s also everything I love about her too. I love stories about excess and emptiness and looking for the next thing hoping it’s THE thing. I love ugly cloaked in glamour. Lana Del Rey works it. Young and Beautiful is so desperate and reflective. I love it. It makes me sad in the best way. 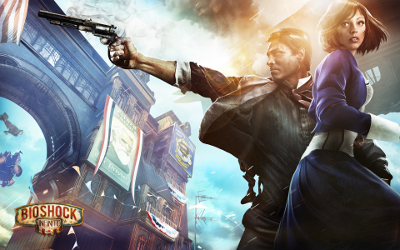 Video games are an integral part of my writing process. I’m at the point where I can’t imagine writing without gaming. I mean, I could do it–but I don’t wanna. When a video game comes together in every way–its aesthetic, its gameplay mechanics, its characters, its story–I tend to feel so inspired I want to write a MILLION BOOKS! You can’t tell me video games aren’t art unless you’re looking for a fistfight. 2013 was all about BioShock Infinite for me. It’s the third installment in the BioShock franchise, a first person shooter that takes place in 1912. You play as Booker DeWitt, a former Pinkerton agent turned PI, tasked with finding a girl, Elizabeth, and delivering her to New York in exchange for wiping out your massive gambling debt. Did I mention Elizabeth is in Columbia which is a FLOATING CITY IN THE SKY? WHICH IS ALSO A DYSTOPIA PRETENDING TO BE A UTOPIA? The politics and history are so ugly against a backdrop of utter beauty and wonder. Visually, it’s unforgettable. The story, even moreso. I will say no more lest I ruin it.

But what really makes BioShock Infinite my favourite video game of the year is that it’s expanded my understanding of and appreciation for world building. As someone who writes mostly contemporary, realistic YA novels, but who would like to branch out more (provided the right idea hits me), BioShock really drove home the importance of those subtle and crucial ways you make a world come alive. Walking down the streets of Columbia and hearing a group of children reciting the terrifying Songbird nursery rhyme was such a moment in this game for me. It’s something you literally walk past, but it’s a something that makes the whole experience that much more OF an experience. It’s important to remember that kind of thing while writing. It was so nice to be reminded while playing.

Also, Elizabeth has earned a spot in my Top 5 as on of my favourite female video game characters. Love her.

FAVOURITE THING TO HAPPEN IN 2013 IN GENERAL 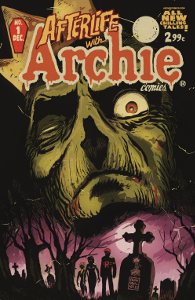 Afterlife with Archie.
Archie. Comics. Meet. The. Zombie. Apocalypse.
What more can I even say.
It’s beautiful.

Courtesy of Courtney, we have 2 signed copies of her What Goes Around bindup up for grabs! The giveaway is open to ALL and will run until Sunday December 22, at 12:01am EST. Use the form below to enter for a chance to win. Good luck!