Hello everyone and happy holidays! Smugglivus is in full swing, and today we are thrilled to celebrate with a sale. 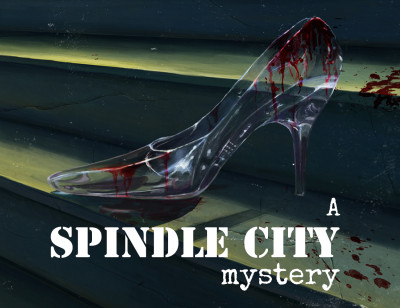 As you may know, we published our very first commissioned novelettes this year, with Carlie St. George’s Spindle City Mysteries. Affectionately dubbed “Cinderella Noir”, the stories follow gumshoe and (good hearted, but maker of bad life choices) Jimmy Prince as he tackles the shady power players of Spindle City’s underbelly. We published three stories in this series online and as standalone ebooks–including 2 bonus short stories told from Jimmy’s secretary, Jack’s perspective. Today, in the spirit of Christmas, we’re putting these babies on sale!

Each Spindle City Mystery is just $0.99, for a limited time. Not familiar with Spindle City? Here’s the rundown.

The Case of the Little Bloody Slipper (Spindle City Mystery #1) 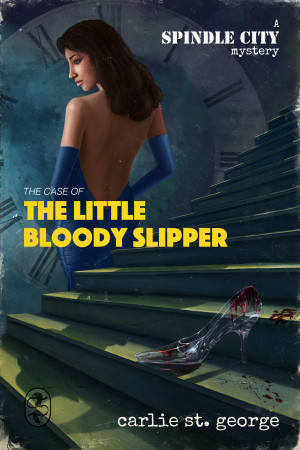 It was half past eleven when I saw her. She was standing at the top of the staircase, with restless fingers and defiant eyes, wrapped in blue silk that clung to her hips.

Jimmy Prince is a private detective with a tendency to make bad decisions, take on hopeless cases, and ask too many questions. But no one is answering his inquiries about Ella, the mysterious dame who slipped into the Prince family gala, stayed for a dance, then disappeared at midnight leaving just a single bloody glass slipper behind. With the help of his trusty assistant Jack (a street-savvy teen runaway who is as tough as she is resourceful), Jimmy finally catches a break when one of Spindle City’s most powerful players, the Godmother, lets slip that Ella is part of a much larger conspiracy and not at all who she seems. With every new clue, Jimmy finds himself a step farther down a path that threatens to uncover some of the city’s best kept, and most deadly, secrets.

In Spindle City, all kinds of tales get told… for a price. Asking the wrong question is a guaranteed one-way ticket to the long and silent ever after.

Taking on this new case might just be Jimmy Prince’s biggest mistake yet.

The Price You Pay Is Red (Spindle City Mystery #2) 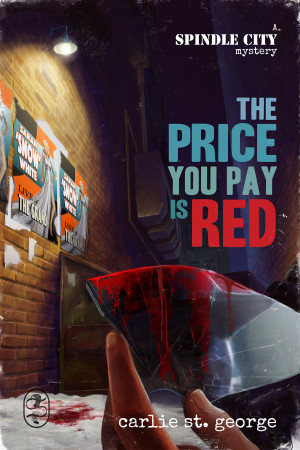 “All women are dangerous,” Rose said. “Anyone underestimated is.”

When Jimmy Prince—excessively stubborn gumshoe and maker of terrible life choices–stumbles on the corpse of Spindle City’s darling actress and heiress Sarah “Snow” White, he and street-savvy sidekick Jack are once again on a case that threatens to expose ugly truths from Spindle’s dark underbelly. Turns out Snow’s death is no ordinary open-and-shut case involving something as mundane as a jealous coworker or spurned lover. Her murder points to a much deeper, insidious plot that involves some of Spindle’s biggest criminals–as well as some of its greatest, most celebrated citizens.

At stake is a rumored vaccine that could save thousands of lives from the Pins & Needles plague–a disease for which there is no cure, and that has already affected Jimmy’s friends and family in irreparable ways. But as Jimmy Prince knows all too well, hope is for saps, and The Spindle is not a city for those who believe in happy endings. Even when they want to, above everything else.

The Long And Silent Ever After (Spindle City Mystery #3) 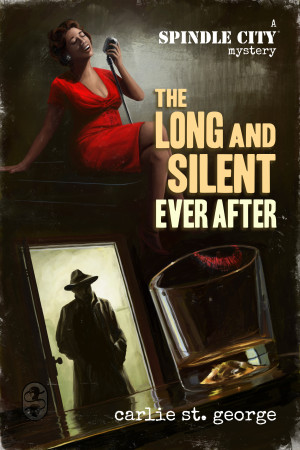 “Hello, Prince,” the Godmother said. “I’m calling in that favor.”

When Rose Briar–cabaret singer, drug lord, and notorious secret-keeper–disappears without a trace from her club, The Poisoned Apple, Jimmy Prince and Jack are on the case once again. This time, the duo may have bitten off more than they can chew, as their investigation drags them into the path of the Spindle’s greatest and most formidable criminal–one who got her nickname for her tendency to burn her enemies alive.

It doesn’t help that Jimmy is having a hard time focusing on the case, torn between his head’s desire to do the right thing, and his heart’s insistence for that one person who always has three gats, a pen, and a smile at the ready.

But in Spindle City, the long and silent ever after waits for no one–and it’s Jimmy’s turn to dance with dragon.

And with that we say, happy holidays to all, and to all a good night!