Who: Lisa Shearin, bestselling author of the fantasy adventure series starring the unstoppable Raine Benares and the cause of all her troubles, the dratted stone the Saghred. We loved both of Lisa’s books so much that we asked her for an interview, and of course had to have her over for Smugglivus! Lisa not only is a wonderful author, but she runs a great blog and really makes an effort to connect with her readers–we highly recommend you stop on over to check out her books and her website. 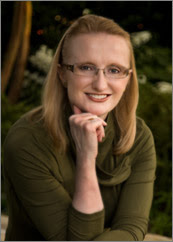 Recent Work: Lisa’s debut novel, Magic Lost, Trouble Found was released in 2007 and made a huge splash with fans of fantasy and romance alike. This year her second Raine Benares novel, Armed & Magical was released and became a national bestseller! You can read our reviews of both books here. 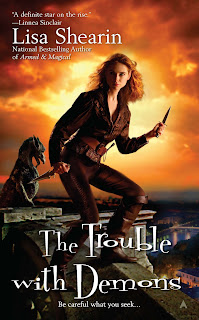 Lisa’s third book, The Trouble With Demons will be released in 2009. For her Smugglivus contribution, Lisa has given us an exclusive snippet from her new book!

Without further ado, please sit back and enjoy this hilarious scene starring Raine, Piaras, and Talon!

Smugglivus Snippet from The Trouble with Demons

Demonologists knew the facts; the rest of us floundered with legends and rumors; none of them were pleasant, and each of them was more gruesome than the one before. The rumor that would probably be making the rounds on campus within the hour—if it wasn’t already—would have nothing to do with fact, and everything to do with horny college students looking for an excuse. Whether demons liking virgins was fact or fiction didn’t matter. I’d be willing to bet that the number of virgins among Mid’s student population was suddenly going to skyrocket. And every last one of those kids would be desperate to lose their apparently forgotten virginity as quickly as possible to ensure protection against the demons. I wondered what new pickup lines they’d be using. Help me; I’m a virgin.

With the impending increase in fake virgins, I was really glad I’d already secured the help of the real thing.

Piaras still wasn’t happy about his role in our little expedition. And I didn’t think his opinion was going to change anytime soon. Especially since Talon had already heard the one about demons and virgins.

Talon’s grin was full of fang. “Well, I’m safe,” he was telling Piaras. “I’m probably one of the safest people on this island. Hell, I’m probably demon repellant.” His grin broadened. “Are you safe?”

It was obvious that Piaras didn’t want to answer that question. “Not exactly,” he finally said.

“Piaras, either you’re safe or you’re not. There’s no gray area here. Which is it?”

I’d listened long enough. “Everyone is safe. Regardless. The island is crawling with armed Guardians. Everyone will be safe.”

Talon’s grin never wavered. “But are you sure of that?”

I glared at him.

“When there’s a danger, shouldn’t you take every precaution?” he asked innocently, his aqua eyes wide.

I added a growl to go with the glare.

“No, I’m not safe!” Piaras snapped. He turned on me. “Now everyone’s going to know!”

Talon snorted. “Everyone already does.”

Piaras actually snarled at me.

Talon clapped him on the back. “Not a problem. I know some ladies who can get you safe real quick. Though if you’re looking for a freebie, you and Katelyn could help each other out. She’s definitely not safe.”

Piaras blushed scarlet. I smacked Talon in the back of the head.

The Trouble With Demons hits stores on April 28, 2009. You can pre-order your copy at Amazon.com now!

And that’s not all! Lisa has graciously provided us with a Raine Benares goodiebag giveaway–ONE lucky winner will receive autographed copies of both Magic Lost, Trouble Found and Armed and Magical, as well as postcards, bookmarks, and magnets of MLTF, A&M, and TTWD. 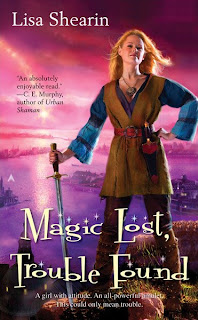 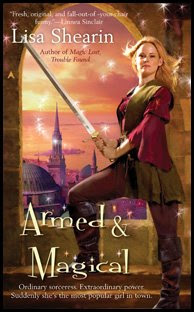 The contest is open to everyone, and will run until Saturday, December 20 at midnight (Pacific Standard Time). To enter, just leave a comment! And for the heck of it–let us know who your favorite character is, and/or who you’re rooting for: Team Tam, or Team Mychael (or Talon, or Sarad Nukpana, or whoever!)