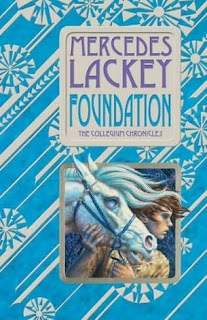 Stand alone or Series: First book in the Collegium Chronicles; can be read as a stand alone, however it is part of Mercedes Lackey’s significantly larger Valdemar universe books.

Why did I read this book: When we received a copy of this book, I was very excited. I had never read any of Mercedes Lackey’s earlier Valdemar books, so I was eager to give this a try.

Summary: (from amazon.com)
The long-awaited brand new novel in the bestselling Valdemar series.

In this chronicle of the early history of Valdemar, Mercedes Lackey’s bestselling world, a thirteen year-old orphan named Magpie escapes a life of slavery in the gem mines when he is chosen by one of the magical Companion horses of Valdemar to be trained as a Herald. Thrust into the center of a legend in the making, Magpie discovers talents he never knew he had—and witnesses the founding of the great Heralds’ Collegium.

Mags (shortened from Magpie) is an orphaned boy, working in Cole Pieters’ mine day and night. Since he can remember, Mags has been told that he is “bad blood”, the offspring of marauding bandits, and is lucky that he has a place in the mine since he is worth nothing. Every day, Mags spends his time hunting for “sparklies” with the other children in the mines, always trying to find a larger rock to earn an extra piece of hard bread for food. Malnourished and worked to the bone, Mags continues with this hard life, accepting it without question or thought, until one fateful day a man dressed in gray on a white horse arrives at the mine, and demands that Mags come with him. For Mags is more than an just an ordinary boy; he has been Chosen by the Companion Dallen, and must fulfill his destiny as a Herald.

Although frightened and untrusting at first, Mags’ fears slide away when he meets Dallen–his Companion, the great white horse with blue eyes. Since birth, Mags has been gifted with Mindspeak, a gift that allows him to hear what others are thinking, and also to more clearly share his thoughts and speak with Dallen. Immediately, Dallen soothes his Chosen, sheltering him with calm and letting him know that everything will be okay. Complacent and trusting of his Companion, Mags leaves his old life with Dallen and the other Herald, Jakyr. Mags is fed full meals, he is bathed, given a bed to sleep in and warm clothes to wear–and he realizes how wrong things had been at the mines. After recovering enough nourishment, Jakyr takes Mags and Dallen to the Collegium in the city of Haven, where he will learn to become a Herald. It is here, at the Collegium, that the quiet Mags learns that not everything is as rosy as Dallen would have Mags believe. While he makes friends and learns extraordinary new things, Mags also learns that troubles face Valdemar, and just how he will fit into the role as a future Herald.

I found Foundation to be a thoroughly entertaining read. Although most of the reviews I have seen thus far for this book state that first time readers either “won’t get it” or will have trouble with some of the assumptions made about Companion-Chosen relationships, I did not find myself confused or lost. As Mags is completely new to the world of Heralds and the makeup of Valdemar as an uneducated, completely isolated young boy, as he learns so too do the readers. Ms. Lackey’s world here feels at once believable and fascinating (of course, this probably does come naturally after having written so many books in this universe)–I loved the divisions and differentiations between Heralds, Bards and Healers, and some of the more subtle brewing politics underlying the Collegia. Similarly, the link between Mags and Dallen and the importance of the Companions was wonderfully painted in this novel, if a bit simplistic.

Foundation reads very much like a young adult novel–it is well-written, but instead of focusing on a traditional central conflict, it instead simply tells the tale of Mags’ early life. There is a lot of time spent on Mags discovering what a warm bed feels like, or the many different textures and tastes of food that he had never before had even imagined existed. Despite the lack of a traditional plot, the story avoids ever becoming boring–in less skilled hands, this focus on Mags’ experiences and discovery of new foods and clothing could quickly have become tedious and banal. By virtue of Ms. Lackey’s strong descriptions and writing skill, Foundation managed to entertain. Indeed, this format put me in the mind of Lois McMaster Bujold’s first Sharing Knife novel, Beguilement–a book that I highly enjoyed despite lacking a driving plot.

The only drawback to this particular writing choice, however, was that by the time the plot rears its head, the book was over half-finished, and the ensuing conflict was rushed and hastily resolved. Considering the strength of the writing voice and style, and given the tempered pace of the story, I had hopes for a more slow simmering plot as well. Still, while I was disappointed with the lackluster major conflict, there were some plot seeds laid here that I imagine will be further explored in the next two instalments to this trilogy.

In terms of characters, Foundation has a well rounded cast. Mags is an endearing young man and learning through his thoughts and discoveries (from the third person point of view) works wonderfully. My only problem with Mags was that there was a level of Mary Sue (Marty Stu? What do you call the male version?)-ness to the character. Everything Mags does, from fighting to math problems, he excels at despite his oh-so-humble beginnings. When faced with questions of morality and justice, Mags never once stumbles nor does he even entertain the notion of making a selfish decision. What saves his character for me, however, is that he remains consistent in his disbelief and how wary he remains towards the outside world (although, again I think he comes around incredibly quickly for someone with such a traumatic past). It also felt very convenient that Dallen was so experienced, patient and understanding when it came to Mags, always ready with answers and guidance as to navigate the social scene at the Collegium. Not to say that I didn’t take a liking to either Mags or Dallen–they are both lovable characters–but it was all so convenient. I would have preferred it had Dallen seemed younger and less experienced, to match Mags’ struggles. The bond between the two just works and in spite of any misgivings I have towards the cookie-cutter-ness of the relationship, it’s still good reading. **One nitpick with Mags, however–he’s a largely uneducated young teen, from a rough past and when he speaks, it is with your typical backwater fantasy country accent (i.e. “Mebbe you c’d do somethin’ with the law…Make it bad t’ put kiddies to work or som’thin” or “Ye went well over, feedin’ me. All I did was wut I should do, aye?”). Which is all fine and well by me. However, when he ‘thinks’, either directly speaking to Dallen or just reasoning things out to himself, his ‘accent’ wavers on and off (i.e. “Master Soren thinks I am worth knowing?” versus “I got the best food I ever et, good stuff t’wear, warm bed…Dunno as I need t’ laugh).**

The other characters in the book are also similarly likable and written well enough. The growing friendship between Mags, Lena and Bear reads nicely, as does Mags’ relationship with Soren, Lydia, and Amily. While none of these characters are particularly original and are walk the straight and narrow, it’s all very pleasant and enjoyable.

Overall I think that’s the best way to describe Foundation: straight-forward and very pleasant. Everything in the book is relatively simple and predictable–but that’s not necessarily a bad thing. Those looking for depth or flawed characters won’t find it here. If a quick, enjoyable read is what you’re looking for, then Foundation is most certainly for you. Although I cannot say how longtime fans of this universe will view the book, I like it enough to come back for the later books in this trilogy, and most certainly will be checking out some of the other Valdemar books by Mercedes Lackey.

Notable Quotes/Parts: I loved the first scene where Mags meets Lena, exemplifying the difference between Mags and other children at the Collegia:

He began working his way into the gardens, guided by the sound of sobbing…at that moment he rounded a clump of three evergreens to find himself practically face-to-face with a young girl, dark-haired, thin, and smaller even than Mags, with a dead rabbit in her lap.

:Don’t!: Dalen shouted in his mind, before he could say anything. And rightly so, because Mags’ impulse on being presented with a dead rabbit was to ask when she was going to cook it and did she need help in skinning and gutting it. Not that long ago, a dead rabbit would have been cause for the nearest thing he and the rest of the kiddies knew as a feast. He would ha e welcomed a dead rabbit with all his heart, but the only ones he had ever seen were going into the Pieters’ kitchen.

As for himself, Mags had eaten dead crows, dead sparrows–even a dead cat, once…it was almost second nature to think of any beast only as a potential meal.

Which, he knew in the next moment, would have been a terrible, and very hurtful thing to say. You didn’t stroke the fur of your dinner the way this girl was petting the dead rabbit. And you certainly didn’t weep over it the way she was doing.

Additional Thoughts: There’s a level of nostalgia that hit me when I read this book (and probably why I enjoyed it so much)–it reminds me of fantasy novels I used to read when I was younger. Anne McCaffrey, Tamora Pierce, Garth Nix, Susan Cooper…although Foundation isn’t as good as any of the classics by these authors, the tone and style of writing feels very much the same.

Verdict: An enjoyable, quick read. Overall I was very pleased with Foundation and will definitely be back for more!