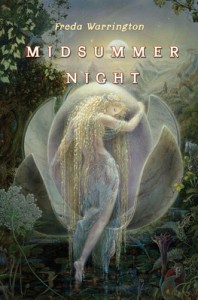 A sensuous, suspenseful modern fantasy of love, betrayal, and redemption

Decades ago, in a place where the veil between our world and the world of the Aetherials—the fair folk—is too easily breached, three young people tricked their uncle by dressing as the fey. But their joke took a deadly turn when true Aetherials crossed into our world, took one of the pranksters, and literally scared their uncle to death.

Many years later, at the place of this capture lies a vast country estate that holds a renowned art facility owned by a visionary sculptor. One day, during a violent storm, a young woman studying art at the estate stumbles upon a portal to the Otherworld. A handsome young man comes through the portal and seeks shelter with her. Though he can tell her nothing of his past, his innocence and charm capture her heart. But he becomes the focus of increasingly violent arguments among the residents of the estate. Is he as innocent as he seems? Or is he hiding his true identity so that he can seek some terrible vengeance, bringing death and heartbreak to this place that stands between two worlds? Who is this young man?

The forces of magic and the power of love contend for the soul of this man, in this magical romantic story of loss and redemption.

Stand alone or series: Can be read as a stand alone novel, but book 2 in the loosely related Aetherials series

Why did I read this book: I recently read and loved Elfland, the first book in the Aetherials world, so of course I was eager to dive into Midsummer Night!

Gill Sharma’s life has recently taken a turn for the worse. A former Olympic-grade long distance runner, Gill has spent her entire life training, dedicated to her craft. A monstrous betrayal and car accident, however, has broken Gill’s hip and leg. Though rehabilitated, she struggles with the residual pain of the accident every day. Even more devastating than the loss of her running career, however, is how Gill’s faith and trust has been shattered beyond repair. Unable to cope at work and at home, Gill leaves London for Scotland and rents a cottage in the secluded estate run by world renowned artist Dame Juliana Flagg. Gill’s trip of solitude and sanctuary, however, quickly becomes complicated when she finds herself stumbling into an otherworldly realm. Gill soon learns that there is much more to the world than she ever imagined, with the existence of fey creatures, or Aetherials, that choose to mingle with humans. And though some Aetherials are good, others are decidedly malicious, and soon Gill finds herself entangled in a bitter conflict that has plagued Dame Juliana’s family for generations.

A much quieter novel than Freda Warrington’s first book in the series, Elfland, Midsummer Night is more contained, but every bit as deep and engrossing as its predecessor. First, I should note that the official synopsis for the book (quoted above) is completely wrong (really bizarrely wrong!). Gill is not a student at Dame Juliana’s art school, and the focus on romance is misplaced – more than anything, Midsummer Night is a novel about a broken character finding herself (with a fantastical twist, of course). Midsummer Night shares a number of similar threads to Elfland, although the book is not a direct sequel and can be read on its own. There’s a family saga of secrets and betrayal, tenuous grasps on reality, the conflicting nature of the aetherial and the human, even the divide between different types of Aetherials – those that live on earth versus those that stay in the spiral – are present here. In contrast to Elfland, Midsummer Night has a slower plot without the central conflict intensity of that prior book, but it’s just as readable and easy to slip into and be carried away.

Even though Midsummer Night is decidedly smaller in scale, it is an beautifully written book with Freda Warrington’s trademark intriguing and textured characters. Gill’s backstory and her struggles over the course of the book are both believable and sympathetic, and her fears and emotions are the driving force of the novel. Her friendship with Peta, the crazy, free-spirited bohemian artist, is wonderful stuff, and Peta is loyal friend that everyone wants to have. In stark contrast, Dame Juliana and her tangled web of pride, deceit and secrecy is fascinating in and of itself. Of course, there’s also the diabolical (in a sort of evil, spoiled child sort of way) Rufus, and the strange young man he wants back more than anything else in the world, Leith.

I enjoyed Midsummer Night thoroughly – although Elfland is still my favorite of the two books thus far. I am interested to see where the next Aetherials book goes (and if it will be another stand alone, or tie in more tightly with either of these two).

Arrival. Stumbling out of a taxi, catching her balance on her painful leg, looking up at a gatehouse: a neat structure of mushroom stone with pointed gables and black window frames. A long driveway curved away beyond wrought-iron gates, but Gill could see nothing of the great house itself, only a wisp of smoke drifting up behind a green haze of conifers. The estate was fringed by woodland and softened by drizzle misting from a bleak grey sky. Inland stood the sweeping shapes of mountains, all in slate hues in the chilly gloom of the day. She could smell the sea. It was May, but felt like winter. The highland landscape looked barren, wild, hostile; nothing had prepared her for the physical rawness of it.

Gill wondered what she was doing here.

“Rotten weather for you, miss,” said the taxi driver, a Sikh with a broad Glaswegian accent. He dumped her case beside her. “Sure you don’t want me to take you up to the house?”

“No, it’s fine,” she said, startled out of her blank moment. “They said I’d be met at the gatehouse.”
She paid her fare. It was a sum that might have made the locals blanch, but she was used to London prices and thought nothing of it. As she fumbled in her purse, a small shock whipped across her stomach. Nothing waited for her in London.

With a cheery salute he drove away, leaving Gill alone on the drive. She spotted a distant church spire, but there was no other hint of habitation, only woods, heather and forest, and a silver rim of ocean to her left. That seaweed scent, mixed with the tang of gorse on a sharp breeze, was exhilarating. Several hundred miles from London on the northwest coast of Scotland—and not a soul knew where she’d gone.

I made it, I’ve escaped, she thought. Her hand convulsed on the handle of her case as the wind took her breath away.

The door of the gatehouse opened and a tall, thirtyish man with scruffy blond hair came strolling out to her. He had stubble and ripped jeans, a lazy, confident swagger, and a shrewd, unfriendly gaze. He wasn’t local, she realized as he spoke; his voice had an antipodean twang.

“Hello, there. I hope you’re not from the tax office. No one goes in without an appointment and you lot are really pushing your luck.”

She frowned. “I’ve rented a cottage.”

“Oh yeah? Think you can trick your way in? That’s new.”

“No, really.” She pulled her booking confirmation from the front pocket of her suitcase. “I’m here on holiday. Gill Sharma.”

He glanced at it, gave a quirky, one-sided smile. “Oh. Miss Sharma. Robin Cottage. Right. Sorry, just checking. You look like you’re on a mission, and that case could have been full of documents, you know?” The blue eyes came to life and his voice became friendly and teasing—or was it mocking? Her judgment on such nuances had never been great. Because she’d traveled first-class on the train, she’d dressed appropriately, as if for work; a charcoal-grey suit with pencil skirt, black tights, no-nonsense shoes with a medium heel. Her outdoor jacket was stuffed inside the wheeled case. Her hair was tied back and her narrow, black-framed glasses were businesslike. She felt exhausted and rumpled but, apparently, still looked smart enough to be mistaken for a tax inspector.

Additional Thoughts: We’ve recently had Freda Warrington over for a guest blog this Smugglivus – make sure to check out what her favorites of 2010 were HERE.

Reading Next: The Native Star by M.K. Hobson

Over at Kirkus: Kaleidoscope: Diverse YA Science Fiction and Fantasy Stories