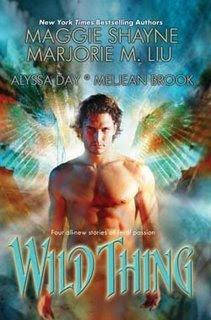 Stand alone or series: Prequel to the Hunter Kiss series

Summary: “My mother used to say that the tale of the world is drawn in blood, blood in flesh, veins forking into destiny like the branches of the tree from which the apple hung and the serpent danced, trading whispers for the corruption of innocents. Good and evil, knowledge and choice. And there, at the root of history, the world tumbled down….”

Why did I read this book: Thea’s amazing review of The Iron Hunt, the first full lenght novel in the series, left my mouth watering.

After Thea’s review of The Iron Hunt (which she loved), I realised that I had the Novella that introduces the series in the Wild Thing anthology. I decided to give it a go. And I loved it.

It has everything I could hope for in a book. A captivating narrative voice (in first person), a very interesting world where demons co-inhabit with humans and a sweet and heart warming romance. (Even though this series is Urban Fantasy, the romantic element is at the core of this prequel).

Maxine Kiss (and my appreciation for the book starts right there, what an amazing name for a protagonist) is a Hunter. Her job is to protect humans from Demons that escaped their prison in another dimension. Being a Hunter is a position that passes down the line from mother to daughter. When the mother dies (usually in a violent fashion), the daughter will inherit the occupation and….. the boys. The boys are demons that during daytime become the tattoos that cover her body from neck to toes -they are her armor, protecting her and making her nearly invulnerable. At night, they are awake and become separate beings – Zee, Aaz, Raw, Dek, and Mal.

After the death of her mother, Maxine had become her own woman, the boys are her only family, her only friends, and she has no roots, no house: she drifts. She has only her mission. She knows her destiny is one day to die violently and if she ever has a daughter, her death may come sooner rather than later. The boys will always be concerned about their own survival first and foremost and the minute they feel she is becoming old or weak, they will move to the daughter leaving the mother vulnerable to being killed by any of the demons out to get her. Still, she loves the boys: hating them is like hating herself.

As far as premises go this is one of the most interesting I have read of late. From the first paragraphs of the short story, I am gripped.

The story opens and Maxine is having some time off, enjoying an afternoon at the market. She soon realizes that she is surrounded by zombies – not zombies like George Romero’s zombies, these are demon parasites that take hold of a human body and control them from inside. The scene is eerie, Maxine is very conscious of the zombies around but strangely, all of them are watching this man across the street. He is human. But there is something about him. He looks around and somehow, he knows about the zombies, which is impossible, since usually humans know nothing of them. Then he stares at her.

“he stares as though startled , as though he knows me, as though there is a line of history between us – a lifeline- and I can not look away. I cannot blink. I am falling, falling, but the ground is firm beneath my feet and my knees are strong and I know it is all in my head – only there – but I cannot help myself, because all that matters are his eyes. His eyes are so warm. “

All of a sudden, everything gets into motion, the zombies spring into action, they are going to get the man, and she must stop them. She throws her self at him, the bullet that is intended for him bounces off her body and she saves his life. It is too much, he sees too much. They have to go they have to run, the police is coming and the sun is setting and she can’t let him go, because she has to know who he is and why the zombies want to kill him and how come he knows about the zombies in the first place, he is too much of a wild card. And he is not scared of what he sees – he is not scared of her.

There is an immediate connection between them that does not feel too much too soon. It feels right to them, as it feels right to me as a reader. Her choice of being with him is probably a choice that will be her doom; Hunters always end up having daughters no matter the amount of protection and their daughter always get their places. It is part of the magic that makes her what she is – the boys will not be cheated of their future. She puts this prospect to Grant and he just accepts it. There is no going back; it’s been one day since they met, but these two? They belong together. There is a deep trust, a loving relationship that goes beyond petty conflicts and beyond mere sexual attraction (although it is there) . Maxine and Grant just ARE, and together they have the strength to carry on and face whatever is coming their way. He is now, along with her boys, family.

And when she learns what is it that makes him special, that makes him such a prize for the demons, her beliefs in what she does suffer a great blow. I was in doubt whether to spoil about Grant’s gift or not and decided on the latter. Part of the fun in the novel is to go along in their journey, to enjoy their conversations, to learn about them as they do about each other and to follow them until the climax of the story when we learn that there is a bigger evil coming and that the veils that separate the demonic dimensions from our world are breaking apart. There is a powerful action sequence that raises more questions than answers and which sets the motion for the remainder of the series, beginning with The Iron Hunt.

I loved this story. For all its intricate world building, Marjorie Liu’s beautiful writing I am beginning to truly admire and above all, as the romantic reader that I am, for the love that grows between Grant and Maxine.

Verdict: Highly recommended. According to Thea, you do not need to read the short story to be able to understand The Iron Hunt but then you would be missing on Grant and Maxine’s beginnings.