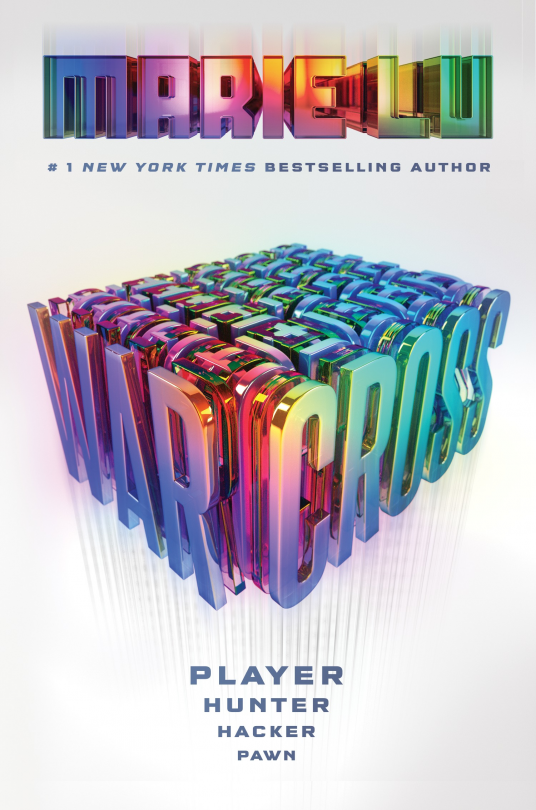 For the millions who log in every day, Warcross isn’t just a game—it’s a way of life. The obsession started ten years ago and its fan base now spans the globe, some eager to escape from reality and others hoping to make a profit. Struggling to make ends meet, teenage hacker Emika Chen works as a bounty hunter, tracking down players who bet on the game illegally. But the bounty hunting world is a competitive one, and survival has not been easy. Needing to make some quick cash, Emika takes a risk and hacks into the opening game of the international Warcross Championships—only to accidentally glitch herself into the action and become an overnight sensation.

Convinced she’s going to be arrested, Emika is shocked when instead she gets a call from the game’s creator, the elusive young billionaire Hideo Tanaka, with an irresistible offer. He needs a spy on the inside of this year’s tournament in order to uncover a security problem . . . and he wants Emika for the job. With no time to lose, Emika’s whisked off to Tokyo and thrust into a world of fame and fortune that she’s only dreamed of. But soon her investigation uncovers a sinister plot, with major consequences for the entire Warcross empire.

Emika Chen isn’t having a good day. Running low on funds and one day away from being forcibly evicted from her landlord, Emika is desperate for that one chance she needs to turn her luck around. Between small payouts for her regular bounty gigs and corrupt police deciding not to pay her at all, Emika finds herself in that proverbial space between rock and hard place. To blow off some steam, Emika takes solace in Warcross–the internationally renowned massively multiplayer online role playing game that takes augmented reality to the next level. Warcross isn’t just any online game; it’s an alternate world that sits on top of our own and so ingrained in every single person’s life that it informs basic economic and social interactions.

Emika logs into Warcross one fateful night with the idea to run a couple of hacks to steal some powerups from a team in the early rounds of the competition… and accidentally does the impossible. Her hack unveils a flaw in the Warcross ecosystem that accidentally glitches Emika into the action of the championship prelims, making her avatar visible to the rest of the world. Overnight, Emika becomes the stuff of tabloid legend–who is Emika Chen?–and earns her the attention of Hideo Tanaka (boy genius and inventor of Warcross). Instead of being arrested for her hack, Emika is whisked away to Tokyo and hired for a job by Hideo–only one other person has ever discovered a chink in Warcross’s security protocol, and Hideo needs Emika’s help to catch him. And he’s willing to pay handsomely to do it.

For Emika, the promise of money to pay off her debts and keep a roof over her head is more than enough incentive–plus she’s always loved Warcross and fangirls hard over Hideo Tanaka. But as her involvement with the Warcross championship increases and her investigation continues, Emika begins to realize that something very, very bad is about to happen. The fate of Warcross–and the billions of people whose lives are inextricably wound to the game–is at risk. And only Emika stands in the way…

Fast paced, addictive, and delightfully over-the-top, Warcross is the newest novel from author and gamer Marie Lu, and it’s just about perfect. A melange of Ernest Cline’s Ready Player One, Corey Doctorow’s Little Brother, and with the addictive YA appeal of, well, Marie Lu, Warcross is a solid debut to a brand new cyberpunkish SFF series that I devoured in a single sitting. If you’re looking for an end of summer popcorn read, look no further: with its fun characters, a fast and furious plot, and a good old fashioned twist at the end, Warcross is the blockbuster you’re craving.

The first and most notable aspect of Warcross is the eponymous game itself. Emily’s world is a dystopian one, with corrupt law enforcement, tough barriers to entry for respectable jobs, and nigh impossible for anyone possessing a criminal record or without money to navigate. To escape the dingy squalor of everyday life in an overcrowded population center like New York, rich and poor alike slap on some headsets and plug into Warcross–where everything is cleaner, better, and happier. Within the game, anyone can accumulate experience points, explore and even build brand new layers of reality. Many, like Emika’s roommate, choose to lose themselves in this reality as opposed to the real world. Sounds like a prime environment for some serious dystopian hacking action, right? In this regard, Warcross founder Hideo’s paranoia and desire to hire Emika makes complete sense–in a world where everyone is plugged into a single platform, security breaches could compromise not only the company’s financial future, but the integrity of an entire socioeconomic ecosystem. (Granted, Warcross takes a very microcosmic look at these interrelsted systems and boils doeverything wn to a very limited set of variables and players–this isn’t a sweeping cyberpunk epic. But it doesn’t attempt nor does it need to be.) Suffice it to say, from a world building perspective, I was thoroughly entertained by Lu’s take on a futuristic world whose populace is entirely reliant on an escapist technology. (It’s not too far off from a world with free Wi-Fi and a growing dependence on screens, amiright?)

The other factors that Warcross has going for it are it’s diverse characters, and some deft (and joyously over-the-top-ridiculous) plotting. I love a good team assembly and heist story–both tropes Warcross hits in its 300+ pages. There’s a ton of battle sequences in imagined virtual environments (including an obligatory mecha/dinosaur battle), a lot of Emily having to learn on the job as an architect and a brawler, and it is all awesome.
Similarly awesome are the book’s main characters. Warcross‘s narrator is rainbow-haired electric skateboard-toting hacker Emika Chen–fiercely independent and willing to take big risks in order for a big payday, Emika initially reads as a down-on-her-luck orphan with a family legacy of debt and bad juju. This isn’t a bad thing, necessarily–certainly there are plenty of other books with similar characters who are enjoyable enough!–but Emily is more than the sum of these parts. She is confronted with some tough decisions, especially by the novel’s critical third act, and turns out to be a much more nuanced character than I initially gave her credit for.

Beyond Emily, I love the fact that everyone is diverse in this world and simply accepted as they are–the captain of Emika’s team is in a wheelchair (which doesn’t stop him from being the teams combat and management lead), two male teammates have A Past (and that sexual tension is kind of awesome), the majority of main characters are not caucasian. More of this, YA SFF, please.

The only major thing I wasn’t quite enamored with was the obligatory romance between Emika and Hideo. It’s a little trite and typical YA instalove… but that said, I like the way things develop and take a turn in this novel. (Also big props to Marie Lu and the fact that there is no sex shaming in this book.)

Similarly, the twist at the end of Warcross was not entirely unexpected, and it all felt a little rushed and obvious. That said, even when you know a big twist is coming, that doesn’t necessarily detract from the experience–and Warcross’s twist is both super cinematic and enjoyable.
Ultimately, Warcross is absolutely worth the read and I highly recommend it for those looking to reach that last end-of-summer popcorn itch.