As part of Pride 2017, we are highlighting new and upcoming LGBTQIA books.

Today, we are giving the floor over to Charles Payseur, reviewer extraordinaire and a Book Smugglers Author, to talk about the upcoming YA novel The Art of Starving by Sam J. Miller. 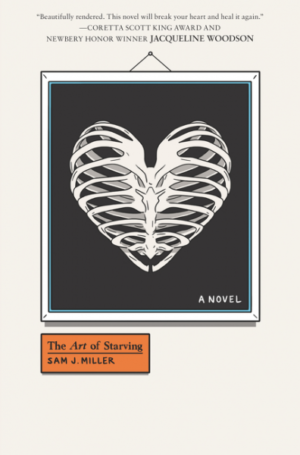 Matt hasn’t eaten in days. His stomach stabs and twists inside, pleading for a meal, but Matt won’t give in. The hunger clears his mind, keeps him sharp—and he needs to be as sharp as possible if he’s going to find out just how Tariq and his band of high school bullies drove his sister, Maya, away.

Matt’s hardworking mom keeps the kitchen crammed with food, but Matt can resist the siren call of casseroles and cookies because he has discovered something: the less he eats the more he seems to have . . . powers. The ability to see things he shouldn’t be able to see. The knack of tuning in to thoughts right out of people’s heads. Maybe even the authority to bend time and space.
So what is lunch, really, compared to the secrets of the universe?

Matt decides to infiltrate Tariq’s life, then use his powers to uncover what happened to Maya. All he needs to do is keep the hunger and longing at bay. No problem. But Matt doesn’t realize there are many kinds of hunger…and he isn’t in control of all of them.
A darkly funny, moving story of body image, addiction, friendship, and love, Sam J. Miller’s debut novel will resonate with any reader who’s ever craved the power that comes with self-acceptance.

The premise of the novel is simple enough. Matt’s sister, Maya, has run away from home. Matt is certain that something terrible happened to her. He thinks he knows who hurt her, another boy in his class named Tariq. What he doesn’t know is what. Or why. Or how to get revenge. Luckily for that, though, Matt discovers that he might be developing superpowers. Strange, somewhat disturbing superpowers. And he’s pretty sure the less he eats, the stronger he becomes.

The book is written as a sort of diary, but more than that it’s written as a manual that Matt creates to guide other people toward the awakening that he’s experienced. It’s a frame that gives readers a bit of distance at first. These sections are written in second person, but the “you” that Matt is addressing seems at first to be nearly universal. He’s speaking toward this huge audience. He’s the author of the book and we, the readers, are safe in our anonymity and distance. Or so we think. As the novel moves forward this frame begins to shift. What starts off as nearly familiar—a young person gaining powers and struggling to adjust to them but ultimately succeeding and becoming a hero—incrementally nudges the reader toward more and more uncomfortable territory. It challenges us not only in how we treat Matt but how we treat eating disorders in general. If someone isn’t eating much, what of it? They want to look good. Maybe it’s even healthy. And if they have low self esteem then they should fix that, obviously, but the idea and narrative that enjoying eating is sinful and that eating disorders aren’t serious is so toxic that how Matt treats food seems almost normal when he’s a voice of authority, when he’s penning his own how-to where food is the enemy and power resides in hunger.

Of course, the novel doesn’t let us maintain that distance. In fact, it directly challenges and comments on the frame, and in a pivotal moment in the story we the readers are confronted with what Matt has been doing, with how far he’s come and in some ways how far we’ve let him come, assuming that he knows best, that there’s no real problem surely. And the distance between Matt and the reader disappears as the story twists and turns in a roller coaster of revelations, pains, betrayals, and horrors. This is a visceral read, shocking and terribly real. Matt is still growing, still learning, and the story doesn’t make him merely an adult in kids clothing. Which is especially valuable because there is such an association out there with queerness and adult content. The way in which the world attempts to contextualize all queerness as mature means that as a young person Matt has no real mentor, no one to help him figure himself out in a safe way. Add to that the poverty and isolation that he’s dealing with, and what we find is a deeply tragic, if also deeply magical and hopeful story that breaks with expectations to subvert and challenge.

The plot is also something of a romance, but again resists falling into the common tropes and pitfalls that so often dominate the field. Matt and Tariq’s budding and blossoming relationship is one dominated by fear and uncertainty, one that begins in suspicion and misunderstanding and then moves forward, the characters trying so hard not to hurt each other while also having no positive examples of queer relationships in their lives. And yet their struggles and care and ups and down bring a life to the prose, a danger and a joy and a shattering despair. I love, absolutely love, how the setting reflects a reality that so many queer people find themselves in, with a fair amount of support from family and friends, but also without a large community of other queer people and especially without older queer people who might act as guides and resources. Instead Matt relies on the internet, on examples from what media he can find—and the results are fairly toxic. And the novel resists creating a narrative that erases the scars of that toxicity. Matt’s journey is ultimately an affirming one, but it does not allow the reader to lose sight of the damage done, of the toll that isolation and intolerance and poverty take on a boy trying to make sense of his body, his identity, and his opportunities.

Like all of Miller’s fiction that I have read, the story imagines a world where magic is lurking just beneath the surface, and while it carries with it a beauty and a power, it’s not really a cure-all for our society’s ills. I feel I keep coming back to this, but I love how the story refuses to follow the narrative where a character’s new-found power somehow “fixes” their problems, or even replaces them for “more important” ones. It’s the narrative that Matt wants, what he has been taught to expect, that by embracing his powers, his hunger, he will somehow leave behind the deep insecurities and traumas he carries with him. It almost seems like it will be possible, too, until it’s not. Until the world seems to constrict and options evaporate and every good thing dies an ugly death and the book shows that the problems Matt faces are not so simple as super villains. And that, even with superpowers, the hero doesn’t always win.

In short, this book hurts in all the best ways. And it takes on the tropes of speculative fiction and YA armed with fire and anger and hunger. What’s left when the smoke clears (and the pigs have been contained) is a map of damage done, a landscape that will always bear the marks of conflict and pain, even if there remains hope of new growth, new construction. The book doesn’t close the door on the future—indeed, it’s vision of the future is that things can get better, that they do get better—but it doesn’t imply that the future can erase the past or the present. It demands that we confront the harm being done now, the toxic narratives that teach and reinforce institutional bias and bigotry, that normalize and moralize hate and self-loathing. And in so doing it reduced me to a puddle of tears more than once, and left me somewhat broken, somewhat numb, but also full of love and anger and a hunger of my own. For community. For a better world. And perhaps the highest praise that I can give to this novel is to say I wish desperately I had read it when I was young myself. That for as much as I love it now, I think I might have needed it then, and I imagine I am not alone in that.

Powerpuff Girls Review: Through the Veil