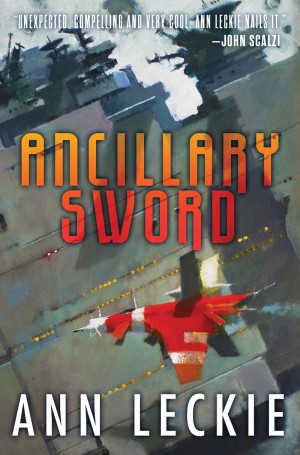 What if you once had thousands of bodies and near god-like technology at your disposal?

And what if all of it were ripped away?

The Lord of the Radch has given Breq command of the ship Mercy of Kalr and sent her to the only place she would have agreed to go — to Athoek Station, where Lieutenant Awn’s sister works in Horticulture.

Athoek was annexed some six hundred years ago, and by now everyone is fully civilized — or should be. But everything is not as tranquil as it appears. Old divisions are still troublesome, Athoek Station’s AI is unhappy with the situation, and it looks like the alien Presger might have taken an interest in what’s going on. With no guarantees that interest is benevolent.

Why did we read this book: Because Ancillary Justice was the best book we read last year

Warning: spoilers for Ancillary Justice. If you haven’t read the first book yet (OMG WHY NOT), avert your eyes right now.

It’s probably not an exaggeration to say that all SFF eyes are on this book right now. Given the immense success of Ancillary Justice – it won all the major awards and yes, this includes a rare Book Smugglers Double Ten Review – I bet everybody is thinking: will the sequel be as good as the first novel?

Well, the answer is a resounding HELL YES.

From a plotting perspective, Ancillary Sword is at first glance, a rather straightforward affair. The story picks up where we left off at the end of Ancillary Justice with The Lord of the Radch still at war with herself and Breq as a newly-minted ship captain on her way to Athoek Station, where Lieutenant Awn’s sister lives. At the station, Breq gets involved with the station’s day-to-day management and with the petty – and not so petty – relationships between its different sections. At the end of the day though, Breq is there to make amends – to atone for what she did to her beloved Lieutenant Awn.

The first thing to note about Ancillary Sword is how it has a largely linear narrative and a very limited point of view. One of the most important aspects of Ancillary Justice was its alternating narrative between the now and the then, with the latter offering a taste of what it was like for Breq to have its consciousness split between multiple viewpoints. This is all but gone in Ancillary Sword and all we are left with is the Breq from now – the Breq that needs to come to terms with the fact that she is now a one-bodied ancillary (an ongoing journey started 20 years prior to the events in Ancillary Justice). She is occasionally able to experience multiple-bodied viewpoints that the ship Mercy of Kalr shares with her (and Ann Leckie continues to handle that head-hoping with aplomb) but those moments are brief and almost too elusive and end up amplifying Breq’s sense of separateness.

This is perhaps the most striking thing about Ancillary Sword: how it manages to be a deeply personal, emotional book without losing track of any of the larger issues that continue to be explored here. Breq is an AI, not human – and it’s interesting that the sense of her being not-entirely human really hit me more strongly here in this second book, ironically, just as Breq becomes more and more human. Although one could – and should – make the argument that the AIs and the ancillaries and the ships in this series are not completely separate, emotionless beings. The moments that resonate the most are in fact, the ones when these supposedly unemotional beings show they have a remarkable sense of compassion, justice and feeling than the supposedly civilised Radchaai should have and in fact, are said to be the only ones to have.

This is one of the strongest ongoing themes in these books: the examination of what it means to be a Citizen, what it means to be civilised, with a confrontation of internalised assumptions and prejudices from both a personal and social point of view.

That all of this happens whilst Breq not only investigates threats from aliens as well as from internal forces within the empire but also confronts aspects of the Radchaai that include the hidden truths of exploitation and slavery of different peoples? It’s basically genius. GENIUS, I say, because the narrative might be linear, might be reduced to mostly Breq’s one point of view but it still captures SO MUCH, in a complex way that is, at the end of the day, also incredibly fun.

I could list a few criticisms: perhaps there is some unnecessary, repetitious considerations from Breq. Perhaps, the question of slavery was more heavy-handed than necessary (or perhaps not, some things should be faced HEAD-ON after all). THERE WAS NOT ENOUGH BROODING SEIVARDEN. But to me, those are minor flaws in an otherwise perfect book. Once more with feeling: ALL THE AWARDS. And also a top 10 spot for me.

Please allow me a brief moment to be incredibly unprofessional and fangirly because holy effing crap. Ancillary Sword, you are amazing.

I have to add my voice to Ana’s, singing the praises of both Ancillary Justice and Ancillary Sword and marveling awestruck and stupefied by Ann Leckie’s writing prowess. Holy effing crap.

Can I take a step back and examine the text in context? As Ana says, Ancillary Justice won ALL the awards last year – taking home the Nebula Award, BSFA Award, Arthur C. Clarke Award, Locus Award, and the Hugo Award. This is success on a near unprecedented scale, especially for a debut full-length novel. Suffice it to say, there is a lot of expectation when it comes to follow-up novel Ancillary Sword. How could anything top the glorious mind-bending, challenging, award-winning marvel that is Ancillary Justice?

Perhaps Ancillary Sword doesn’t quite live up to the same rush, the same unexpected in-your-face challenge that Ancillary Justice posed – but it’s still an amazing, thrilling, provocative novel that forces readers to question their own humanity. And I loved it. OH, how I loved it.

In Ancillary Sword, Breq – the Artificial Intelligence that was once grand starship Justice of Toren, brought low to a single body, hungry for vengeance – has been given its own command and her own mission by none other than Anaander Mianaai, Lord of the Radch. On her new ship, the Mercy of Kalr, Breq makes quick use of power as Captain as it sets course for a distant star system in an “uncivilized” part of the galaxy. There are conflicts aplenty in Ancillary Sword as Breq deals with administering its power on its new ship (without becoming too enmeshed in the consciousness of said ship), the inter-personal tensions of the Radch and the Lord of the Radch’s own splintering consciousness, the tensions and conditions of colonized people on a distant planet (a parallel to the enslavement and former forced ancillary procurement of conquered peoples), and the appearance of a new external threat that can challenge Radchaii hegemony.

Needless to say, there’s a LOT going on in Ancillary Sword. And yet, for all of these plot threads, this second book is one that is extraordinarily intimate. As Ana says, a large part of this is because we are now with Breq as it is now, without the alternating narrative into the past. We, readers, are entreated to Breq’s current thoughts and feelings, its emotions and burning sense of justice and understanding of anger as it deals with tensions both personal and interstellar. It’s also kind of funny, because though Ancillary Sword is a much more intimate book, it’s also one that illuminates just how different Breq is – not quite human, but a far cry from the conscienceless killer robots, or the anthropomorphized human-like androids of science fiction’s past. Breq is… Breq. The development of this particular character and its struggles – I particularly want to call attention to Breq’s reluctance to entwine fully with its new ship, and Breq’s treatment of Lord of the Radch ancillary Tisarwat – are the driving factors that make Ancillary Sword so successful and resonant. At least they are in my mind.

On the plotting and overall trilogy arc-moving front, Ancillary Sword is, admittedly, a bit weaker than its predecessor. There are plot threads aplenty in this second book, but there’s also a bit of heavy-handedness (particularly when it comes to the effects of colonialism in space), and a sense of in-between-ness as there are so many stories to be resolved in the next book.

These quibbles are but footnotes, though, to a truly spectacular sophomore novel. I loved Ancillary Sword, truly, madly, deeply. It is absolutely a top 10 pick for me this year, deserving of all the awards, and all of the praise.

Do yourself a favor and read it immediately, Citizen.

Book Review: A Greyhound of a Girl by Roddy Doyle