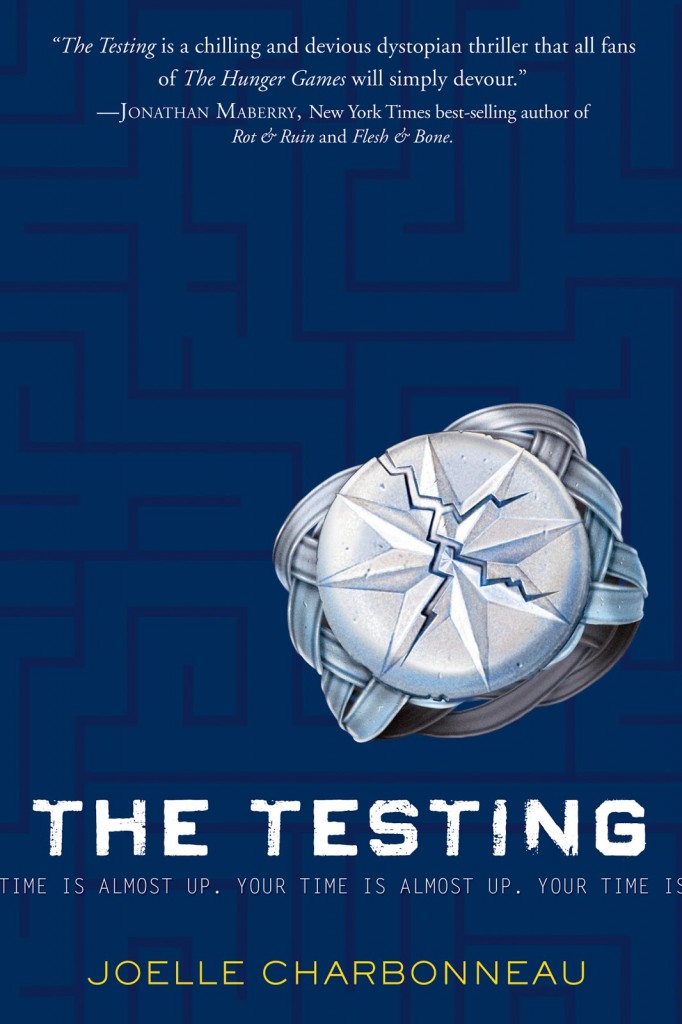 Keep your friends close and your enemies closer. Isn’t that what they say? But how close is too close when they may be one in the same?

The Seven Stages War left much of the planet a charred wasteland. The future belongs to the next generation’s chosen few who must rebuild it. But to enter this elite group, candidates must first pass The Testing—their one chance at a college education and a rewarding career.

Cia Vale is honored to be chosen as a Testing candidate; eager to prove her worthiness as a University student and future leader of the United Commonwealth. But on the eve of her departure, her father’s advice hints at a darker side to her upcoming studies–trust no one.

But surely she can trust Tomas, her handsome childhood friend who offers an alliance? Tomas, who seems to care more about her with the passing of every grueling (and deadly) day of the Testing. To survive, Cia must choose: love without truth or life without trust.

Stand alone or series: Book 1 in the Testing trilogy

Why did I read this book: I’ve had my eye on The Testing for a while. I’ve been burned out on YA dystopias lately – having been severely disappointed with the majority of the new books in the subgenre, not to mention the disappointments of new installments in series’ I previously enjoyed. But The Testing caught my eye, and I was eager to give this new first in a trilogy a try.

Malencia “Cia” Vale has always yearned for the chance to prove herself and change the world, so on the day of her graduation, she desperately hopes to be chosen as a Testing candidate. Only the best and brightest are selected from across the United Commonwealth’s colonies and sent to Tosu City to undergo the grueling Testing process. The only way for a young person to gain admission to University, passing the Testing process is a ticket to becoming one of the United Commonwealth’s valued leaders, who will reshape a country ravaged by war and ecological collapse. With both scholastic aptitude and practical skills, Cia is passionate about following in her father’s footsteps and going to University, ever hopeful that she will be one of the chosen few who will make the Commonwealth a better place.

Cia’s dearest wish is granted when a government official announces the news that she and three others of her graduating class have been selected as candidates – the first to be selected from the Five Lakes Colony in over a decade. While most of Cia’s family reacts to the news with joy and pride, Cia’s father is grim, even frightened. For the Testing is no mere academic boot camp selection process, and those who are not worthy disappear. As Cia and her fellow Five Lakes friends soon learn, the Testing is a far more brutal kind of examination, and only the very strong and very smart will survive.

The first book in a new trilogy, The Testing is at first glance a Frankenstein’s monster-like amalgam of familiar YA dystopian fare. There’s the post-war, fractured colony setup and annual selection process that is entirely reminiscent of Suzanne Collins’ The Hunger Games or Lois Lowry’s The Giver. There’s the busted shell of civilization (Chicago, once again) and controlling government ala Veronica Roth’s Divergent or Scott Westerfeld’s The Uglies series. There’s a feisty first-person narrating heroine, the promise of violence and brutality, and (of course) a love interest. While this all sounds rather familiar and formulaic, I’m very happy to report that The Testing manages to distinguish itself from the pack of wannabe Hunger Games “dystopias” (quotation marks intentional, more on that in a bit). In fact, The Testing is far more brutal than most of the books in this particular subgenre; not only is the government and world building properly dystopian, but this is a novel with serious teeth. If you’re a regular reader of The Book Smugglers, you might be familiar with my chief complaint for all contemporary YA dystopian fiction (i.e. the lack of teeth). By that I mean there’s never any fear that our heroes are in the wrong, that they won’t do the right thing, or that they won’t survive. The governments are usually haphazardly construed totalitarian regimes that are controlling and evil for the sake of being controlling and evil. In these YA dystopias, heroines are also uniformly and effortlessly beautiful, and manage to save the world AND land the hot guy at the same time (typically, this heroine has no real defining characteristics, either). I’m sick of this type heroine and “dystopia,” folks.

Thankfully, The Testing does not suffer from this affliction. The basic dystopian premise is actually fantastic: Cia’s Commonwealth is a government that employs some truly brutal tactics in the testing of its best and brightest young students, but the inherent logic of the government’s setup makes sense. I also love the way that the information about the world – the seven stages of disaster including war, societal and ecological collapse – is relayed, in plain sight, through test questions and answers. Usually this type of thinly veiled infodump is annoying, but as this whole book is a test, it actually makes sense.

Furthermore, The Testing is a sneakier, more subtle kind of dystopia than the current crop of books on the market; in this post-apocalyptic world, things have already gone to hell and the government has restructured the country to restore safety and balance. Cia’s United Commonwealth doesn’t seem like a bad place, especially considering that the greatest honor to which all citizens strive is selection to be tested and then, hopefully, a move on to university and earn a place as a contributing and important member of society. In a way, this is a perfect YA dystopia – an analogy for the pressure of life after high school, the answer as to the question “What do you want to do when you grow up?” and the dreaded standardized tests that precede acceptance to a prestigious college. In The Testing, these pressures are taken to a whole new level – in Cia’s version of SATs and entrance examinations, failing a test is met with death – and I love that hyperbolic premise. In a perverse, wonderfully twisted way. (Says the girl who is done with higher education – hopefully – forever.)

In fact, what I loved the most about The Testing is its brutality. People are grievously injured and die in this book. Our heroine is not afraid to kill people (and she does). The main characters aren’t bailed out of tough decisions that end other lives. In other words, The Testing has those sharp teeth I’ve been looking for.

From a character perspective, The Testing also does a solid job, thanks to the strength of its wonderful heroine. Cia is a likable heroine that breaks free of the typical subgenre mold – she’s a bit of an unreliable narrator, which works nicely with her blunt, terse first person present tense point of view. I love that Cia is a quieter character who is more modest in her thoughts (clearly she’s an excellent student and highly skilled, though she’s very self-deprecating early on in the book), and I especially appreciated both her introverted nature and her healthy dose of paranoia. Cia is no-nonsense and focused on survival first, but she’s also deeply compassionate and fiercely dedicated to those she cares about. Her methodical nature is also an asset, and I love how truly competent she is when it comes not only to book smarts, but practical application and deduction. Also, I love a heroine that is good with math and sciences, and Cia’s strength with mechanics is a definite plus.

Per contemporary dystopian YA usual, there is a requisite romance in The Testing, but it is secondary to the main story and, while it is of the “I’ve always had a crush on you” variety, it’s not cloying. Thankfully there’s no love triangle (there’s a sort of allusion to one but it quickly becomes clear that it is NOT happening), and more than a few times Cia thinks to herself that this is NOT the time for melodramatic romance. The love interest in question, Tomas, also has some mixed motives – we don’t really know what Tomas has done to survive (especially in that killer fourth exam), and while he seems to be devoted to Cia and trustworthy, there’s some serious doubt regarding his character. I like that very much.

And finally on the subject of endings, I liked the way that the book ends, and I’m VERY glad that book 2 is out this fall (will book 3 be following shortly thereafter?). Ultimately, this was a highly enjoyable book and a strong start to a brand new series. If you’re looking for a dystopian YA novel along the lines of the big blockbuster favorites, look no further: The Testing awaits.

I can hardly stand still as my mother straightens my celebratory red tunic and tucks a strand of light brown hair behind my ear. Finally she turns me and I look in the reflector on our living area wall. Red. I’m wearing red. No more pink. I am an adult. Seeing evidence of that tickles my stomach.

“Are you ready, Cia?” my mother asks. She too is wearing red, although her dress is made of a gossamer fabric that drapes to the floor in soft swirls. Next to her, my sleeveless dress and leather boots look childish, but that’s okay. I have time to grow into my adult status. I’m young for it at sixteen. The youngest by far in my class.

I take one last look in the reflector and hope that today is not the end of my education, but I have no control over that. Only a dream that my name will be called for The Testing. Swallowing hard, I nod. “Let’s go.”

Reading Next: The Ocean at the End of the Lane by Neil Gaiman