Title: The Name of the Star 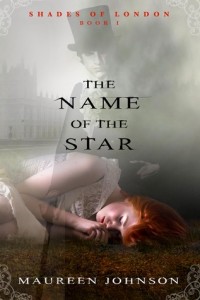 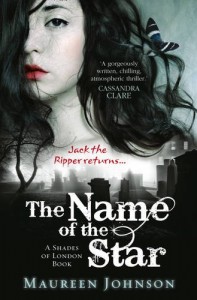 The day Louisiana teenager Rory Deveaux arrives in London marks a memorable occasion. For Rory, it’s the start of a new life at a London boarding school. But for many, this will be remembered as the day a series of brutal murders broke out across the city, gruesome crimes mimicking the horrific Jack the Ripper events of more than a century ago.

Soon “Rippermania” takes hold of modern-day London, and the police are left with few leads and no witnesses. Except one. Rory spotted the man police believe to be the prime suspect. But she is the only one who saw him. Even her roommate, who was walking with her at the time, didn’t notice the mysterious man. So why can only Rory see him? And more urgently, why has Rory become his next target? In this edge-of-your-seat thriller, full of suspense, humor, and romance, Rory will learn the truth about the secret ghost police of London and discover her own shocking abilities.

How did I get this book: I got an ARC thanks to a generous friend.

Why did I read this book: I love Maureen Johnson! That is all.

The Name of the Star follows Rory Deveaux, an American teenager from Louisiana as she attends her senior year at a London boarding school. Her arrival in England coincides with the outset of a series of gruesome murders by what seems to be a Jack the Ripper copycat. As the bodies pile up, Rippermania spreads throughout England and Rory gets stuck in the middle of it all when she becomes a witness after seeing a mysterious man on school grounds. A man no one else has seen and who becomes the prime suspect of the crimes. As the plot and mystery unfolds, Rory finds herself in great danger and part of a group of people that are, apparently, the secret ghost police of London.

I have yet to read a Maureen Johnson story that I didn’t like. Her books are generally infused with a generous amount of the type of humour (quirky, clever) I love, plus a dollop of awesomesauce and a teaspoon of freshness to make them stand out in whichever crowded genre she decides to write (Contemporary, Paranormal).

Uninspiring culinary metaphors aside, The Name of the Star is a great book. I would say it has two main segments or shall we say, it’s part contemporary novel, part paranormal thriller and both are markedly different in terms of tone. Its first half reads more like a contemporary novel as Rory arrives and settles in in England – it follows her adventures at the boarding school and trying to fit in, trying to making friends and attempting to understand England: its school system, its laws (specially with regards to teenage drinking, a revelation to an American), its different accents and social structure and above all, OMG, field hockey. This first part is slowly developed which I found was great because it not only gave the story a real sense of setting and atmosphere but also provided insight on who Rory is. And she is a great heroine: funny, smart, friendly, lover of all things food, talkative (“we Deveauxs preferred to talk you to death, rather than face you in physical combat”), trying hard to adjust to a new life, a new life by the way which she chose to lead. This is also really cool: I loved how she would bring up her life in Louisiana and reminisce about her crazy family but also be aware that she needed some time apart to experience the world on her own. This sense of independence is very important to what happens later in the story.

During this first part, the Ripper case is almost a secondary plot line, surfacing here and there until it becomes the main story after it is clear that Rory has abilities that only few possess: she can see ghosts. The why and the how are explained with aplomb and are intrinsic part of the paranormal world that the author proposes. This second part is markedly different: things Rory didn’t know exist are revealed, her interests change and so do her group of friends. In the first part of the novel, she is really close with her room mate Jazza but this relationship becomes strained when Rory becomes the bearer of a secret she is not allowed to share. The drama and danger are significantly amplified and the story becomes a thriller and it makes sense that life at the boarding school and regular activities fade into background noise. It is only to be expected and I loved this shift because it exemplifies how Rory life will change from now. It is not everyday that one discovers that ghosts are real and how are you supposed to go on with your normal life when you learn that?

Not only that, but all of a sudden Rory is part of something really big: she learns about this secret police, one of the biggest Governmental secrets (and just as a quick aside: haha, Scotland GraveYard) in the UK. I won’t dwell on this because the fun part of the book is to discover it all alongside Rory, but allow me a quick description of this secret police and how it appears in this story: it is basically ghostbusters. With teenagers. In London. It’s kind of ridiculous but awesome at the same time – it appeals to my inner geek so I bought into all this. I suppose it will be different for each reader.

There is some romance but it is more of the “let’s make out for now” variety rather than the “ you are my one and only, let’s stay together forever” type, which is always a plus and it is such a secondary part of the story to nearly make it tertiary. [1. I am firmly on Team Stephen, by the way. In case you are interested. But only because Callum seems to be taken by a really cool character.]

Finally, the particular Jack the Ripper storyline is wrapped up nicely but something huge happens in the very final page that made me salivate for more. This is another great aspect of the novel and one that speaks volumes about how good it is. I am sick and tired of everything being a series these days but I would read more of The Shades of London now if it were available. This series has real potential: all characters are well developed with background stories that beg further development; what happens in the end opens up a can of worms that will have to be dealt with and is basically an even greater life-changing event for Rory and finally, there are real philosophical, ethical aspects to what the Shades do and I want to see how it will be explored in further instalments.

This book was really and truly a joy to read. Please miss, can I have some more?

The day was ridiculous.

In fact, the situation was so serious I thought they had to be joking – like maybe they staged a special first day just to psych people out. I had one class in the morning, the mysteriously named “Further Maths”. It was two hours long and so deeply frightening that I think I went into a trance. Then I had two free periods, which I had laughingly dismissed when I first saw them. I spent them feverishly trying to do the problem sets.

At a quarter to three, I had to run back to my room and change into shorts, sweatpants, a T-shirt, a fleece, and these shin pads and spiked shoes that Claudia had given to me. From there, I had to get three streets over to the field we shared with a local university. If cobblestones are a tricky walk in flip-flops, they are your worst nightmare in spiked shoes and with big, weird pads on your shins. I arrived to find that people (all girls) were (wisely) putting on their spiked shoes and pads there, and that everyone was only wearing shorts and T-shirts.

Additional Thoughts: Check out this video of the author introducing the book: