This month, we continue our EPIC Old Man’s War Review Extravaganza with a joint review of book 4, Zoe’s Tale 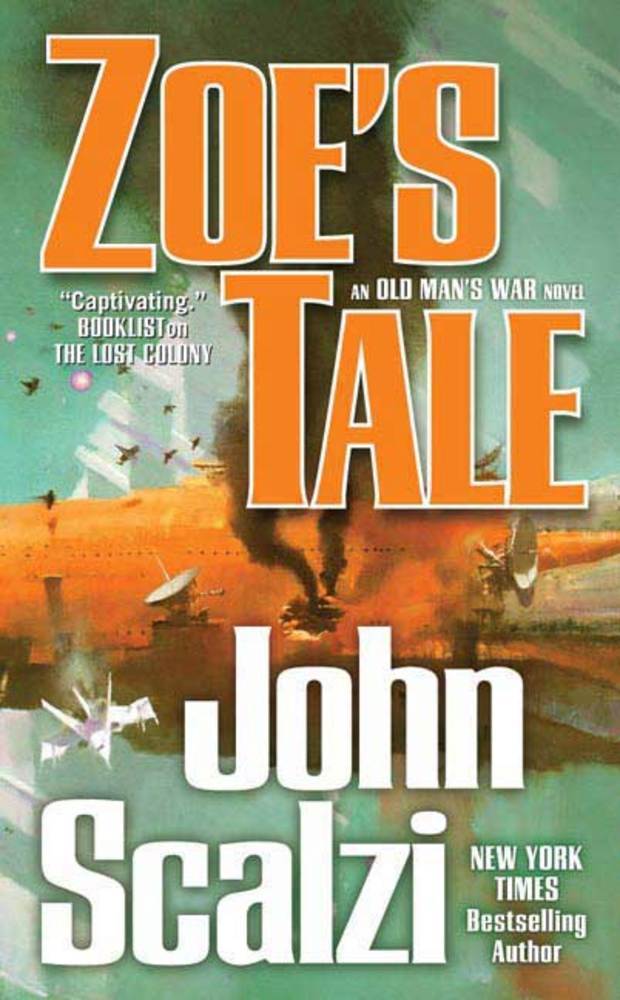 How do you tell your part in the biggest tale in history?

I ask because it’s what I have to do. I’m Zoe Boutin Perry: A colonist stranded on a deadly pioneer world. Holy icon to a race of aliens. A player (and a pawn) in a interstellar chess match to save humanity, or to see it fall. Witness to history. Friend. Daughter. Human. Seventeen years old.

Everyone on Earth knows the tale I am part of. But you don’t know my tale: How I did what I did — how I did what I had to do — not just to stay alive but to keep you alive, too. All of you. I’m going to tell it to you now, the only way I know how: not straight but true, the whole thing, to try make you feel what I felt: the joy and terror and uncertainty, panic and wonder, despair and hope. Everything that happened, bringing us to Earth, and Earth out of its captivity. All through my eyes.

It’s a story you know. But you don’t know it all.

Zoe’s Tale is actually the first book in the series that I heard about before I started reading it because my good friend Renay has not only raved about it but also sent me a signed copy as a present a few months ago. So I’ve had this sitting on my TBR for a while as well as sitting at the back of my mind as The Best in the Series, which made me really look forward to reading it.

And now that I have, well, yes, this is by far the best and my favourite book in the series to this point. Which, when you think of it, it’s an incredibly impressive statement considering that the plot in this book is basically a repetition of the plot of The Last Colony.

It all comes down to perspective, you see.

You may remember that my biggest grievance so far is how despite the clever scifi, the smart politics, the thrillerific content of the previous books in the series, I always felt bereft of a good, engaging, narrative voice when reading from John Perry’s viewpoint. Zoe’s viewpoint is everything I wanted from the series – thoughtful, deep and effective in conveying the high emotional stakes of the worldbulding and the events that take place in The Last Colony.

Clever, smart and snarky Zoe (in many ways, her voice sounded similar to that of Perry, but I feel it fits this character more), whose arc places her personal experience with loss and pain in the context of the wider world, including her status as a person of interest for the Obin. From developing her relationship with her bodyguards Hickory and Dickory to her budding relationship with her best friend forever Gretchen. From falling in love for the first time to losing that love in tragic circumstances. From becoming a trained soldier to exploring the dynamics of politics and effectively engaging in diplomacy with not only the Deadly Werewolves of the colony but also with the Consu, we find out what exactly Zoe had been doing in the background of the story and how much that affected (a lot) the overarching plot.

This is the book in the series that made me want to read more about the characters. The one that engaged me emotionally – to the point where I sobbed when a character’s death hit and mind you, I knew it was coming since that had happened in the previous book. The one that made me a true fan of the series.

So, as I’ve said before during the re-read, I have read and thoroughly enjoyed Jack Perry’s story. Old Man’s War is a fantastic read that stands the test of time. The Last Colony is an unexpected, wonderfully engaging continuation of his story–with Jane Sagan and Zoe to boot. Zoe’s Tale is the exact same story as that third book, but from a completely different–and awesomely so–perspective. I agree with Ana in her assessment that this is, to date, the best book in the series. I do think that The Ghost Brigades, and Jared Dirac’s story, are a close second–and I think it’s important to keep that book in mind when looking at Zoe’s tale.

As much as I love this series, I also agree with Ana that the character development is a little stunted. There are glimpses of greatness in earlier novels (especially with the aforementioned Jane and Dirac), but nothing that ever feels fully fleshed out or worthy of the potential of each character. Zoe’s Tale, though–THIS is the book where that character development kicks in full-force, and it’s awesome. Perhaps part of this is because so much of the groundwork and backstory has already been set with The Last Colony (i.e. we know what is going to happen). But I think a large part of it is because Zoe’s Tale is the first time that Scalzi gets to explore a very different perspective than his usual smart, wry dude narrator. The result is pretty damn awesome.

I think that the things I love and appreciate the most about Zoe’s Tale are the narrative perspective, the YA-nature of the storytelling, the added depth (and much needed dimension) to the underlying world of the CDF and all of their maneuvers, as well as the fact that Zoe isn’t a soldier–at least, not at first. The range of emotion is so impressive and so important in this book–I love watching the relationship between Jane, John and Zoe and the implications therein.

To date, my favorite book in the series. I am jealous of Ana’s signed copy. I will endeavor to steal it.