Title: One Week as Lovers 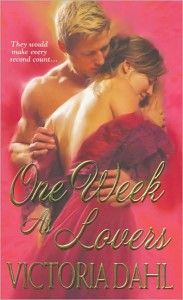 Stand Alone or series: Can be read as a stand alone but the hero first makes an appearance in A Rake’s Guide to Pleasure.

Summary: Even after finding his betrothed in the arms of another man, Nicholas, Viscount Lancaster, knows he must wed. Propriety–and the dire state of his finances–decrees it. At least a visit to his country estate provides relief from playing the role of loving fiance, as well as a surprising encounter with Cynthia Merrithorpe. Once his childhood companion, Cynthia has grown into a lovely, alluring woman–one who’s undertaken a daring ruse to avoid being sold into a miserable marriage.
When Nicholas left for London to assume his new title, Cynthia was forced to put aside her girlish infatuation. Now he’s returned, more wickedly attractive than ever. And this time, Cynthia is determined to experience the pleasure she’s dreamed of for so long. But with a man like Nicholas, seduction is only the beginning of a sensual journey that will tempt them both to defy convention, and uncover the very heart of desire…

Why did I read the book: I am a fan of Victoria Dahl’s novels and I had waited for Lancaster’s book since he walked in A Rake’s Guide to Pleasure with a scar around his neck.

One Week as Lovers is the love story between two childhood friends, Nicholas, Viscount Lancaster and Cynthia, the girl next door. Cynthia has loved Nicholas forever but once the boy turned 15 his family moved to London and they haven’t seen each other in ages. Until Lancaster receives the news that Cynthia has died and he travels back. Cynthia of course, is not dead. She faked her suicide so that she could avoid getting married to the most awful man in existence (Richmond is his name , one that we do not want to repeat in this review.) – because her family is in serious debt and she is basically being sold to “that man”. Cynthia plans to hide (in Lancaster’s estate with the help of his housekeeper) until she finds her ancestor’s buried treasure (no, really) to buy her ticket to America.

When Lancaster comes back she hides in the attic and tries to send him away by pretending to be a ghost (which was hugely amusing) but he soon finds out the truth and his joy at her being alive is unbelievable. They quickly become friends again and of course, you know what happens next: they fall in love. Easily and smoothly.

But there is a catch: Lancaster is also poor. He needs to marry money and quick. His family depends on him and he already has a fiancée waiting for him to get married in a few weeks. This is cause for angst for the lovers and it is a real predicament with no easy way out.
On top of that, and the most important thing of all: Lancaster is damaged. Like, REALLY damaged. Traumatised by an event that took place when he was merely 15 (and why he went away and never came back) and caused a scar around his neck. I am not talking about a hero with say, “daddy issues” or a rake bored with life. Lancaster is severely injured down to the soul and once I learnt why and how he got the scars (the physical one and the emotional one), later in the book, I cried. It is serious stuff , dark and horrible, and it makes it even harder because Nick is just an amazing, adorable hero. Beta to the bone , easygoing; there is an early sequence when Cynthia muses about something Nick’s mother told her that everybody loved Nick because he was born with a gift to put people at ease and fill a room with joy. A joy that unfortunately, he is unable to feel. He must keep up the charade of being easygoing as to not let anyone discover what is really inside of him. And with Cyn, there is the beginning of healing.

She is a worthy heroine for Nick, who understand his problems and is able and willing to help. Her heart is as huge as his and you know, for once a cover manages to capture the essence of a couple – the embrace of the couple above is completely accurate – this is Nick and Cyn and please note, her smile: it’s like being at home. And you know, sometimes, it is easy to forget to root for a couple to the together when it comes to romance because we all know that the HEA is always going to be there in the end anyways but in One Week as Lovers, I was completely engrossed by this couple and I wanted them to be together so every much.

But even if their love is easy, their lives aren’t – and I was also appreciative of that fact that there is no miraculous ending for these two. The money problem is a real one and not easily fixed. And Nick is not entirely healed by the end of the book. Both problems will take time and that’s one of the reasons why One Week as Lovers is so good. But don’t get me wrong – this is not a doom and gloom book. It has serious issues and a dark streak but also light and humorous moments and dear lord, the sex scenes are both excellent and meaningful.

This is the book I have always known Victoria Dahl could write. I am a fan, a huge fan of both her historical and contemporary novels but in most of them, if not all there was a secondary plot that detracted from the romance. There is nothing like this in One Week as Lovers, as the attention is wholly invested in the two main characters and for that I am greatly grateful: because Lancaster is a character, a hero that deserves attention, your attention and anything you can give him.

He has captured my eye when he first appeared in A Rake’s Guide to Pleasure and he had a scar around his neck and I waited with anxiety for his story. And now, after One Week as Lovers, he has captured my heart.

Notable Quotes/ Parts: the book is filled with goodness that I will let you find out. But there is this scene that was so funny: Lancaster thinks Cynthia is an innocent country miss and tries to tell her that they can’t be lovers because her jewel…her flower is something precious. Then Cynthia tries to tell HIM that hello, her flower has been plucked ages ago and hilarity and shoe throwing ensue.

Verdict: emotionally powerful , totally heart-warming with a fantastic hero and heroine that you can’t help but to root for.