Today we wanted to give a bit of a boost to a cool kickstarter going on.

Rosy Press is Kickstarting, with Oni comics, a collected edition of Fresh Romance. One of the titles within the new edition is The Ruby Equation by Sally Jane Thompson and Sarah Kuhn. 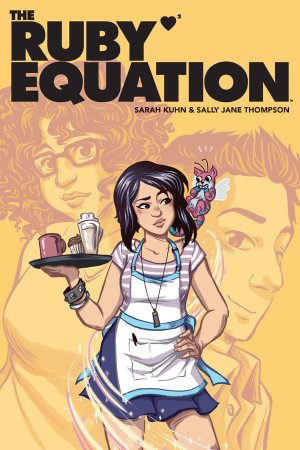 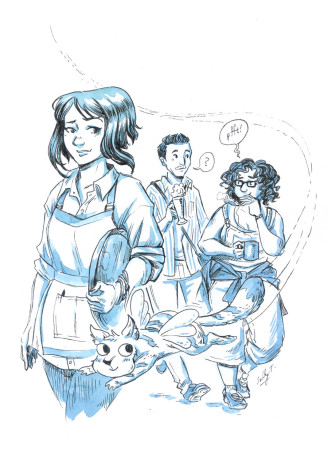 As far as the patrons of Cafe au Love know, Ruby is simply a (slightly odd, slightly prickly) provider of their caffeine treat of choice. But Ruby is also a love emissary, working to meet her matchmaking targets with the help of her furry, winged, invisible-to-humans assistant Toff, so she can finally leave this messy, weird, dimension with its grunchy human romances. But patrons Josh and Megan are starting to seriously mess up her idea that love is an easy-to-solve equation…

Artist Sally Jane Thompson talks about what the story means to her:

“I loved drawing (and then seeing Savanna’s colours and Steve’s letters come in for) The Ruby Equation because it’s sweet and fun and is a reading equivalent of eating a striped paper bag full of pick ‘n mix. But I also love Ruby because I relate to it so much.

I was a lot like Ruby as a teen and young adult. I had a lot of firm ideas about what love ought to look like and how it ought to work, despite never having been in love. Romance in films and books made me roll my eyes. I had crushes, sure, but the intensity and messiness of other peoples’ relationships and feelings seemed very unnecessary to me. And I swore that I would never write a romance story.

Granted I drew this one, but I’ve broken the writing rule on other stories too by now. And when I met my now husband in my mid-twenties, all that stuff other people seemed to experience made a lot more sense. I felt like I was experiencing what most people did in their teens a decade later. It was nice, in a way, with the extra life experience to keep me grounded in this wave of new feelings and experiences. And I love this about Ruby too: a story about someone having a first experience of love as an adult, which is a nice bonus for any readers whose firsts, of various kinds, were not when we were teens.

And for me, Ruby was a first as well – but not the last by any means. You can expect more gushy, grunchy, candy-like humanity from me.”

The Ruby Equation is available in a collected digital edition via Comixology or Rosy Press, but is also currently being Kickstarted a print edition of Fresh Romance with several other brilliant comics. The Kickstarter version features a beautiful exclusive cover by Kevin Wada, and ends very soon (March 15), and would love your support for beautiful comics in print!

Intro to a Series: Lord of the White Hell by Ginn Hale