THE DINOSAURS ARE HERE! And today, we are delighted to host author Victor Milán talking about the most important thing when writing a book about dinosaur lords: suspension of disbelief. 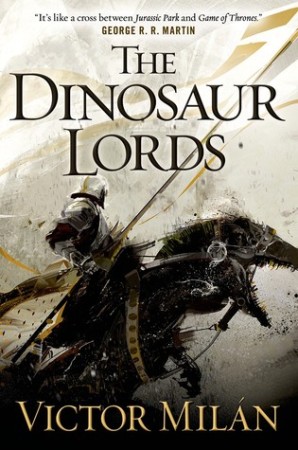 When I was but a tad, we watched a TV show called MANNIX. At least once every episode villains chased the titular hero in a car. And never caught him, even though he was running. Right down the middle of open lanes – ignoring things like parked cars and giant cement columns which offered certain protection against becoming roadkill.

This drove me nuts. But when my Grandmother explained, “They have to do it that way, otherwise there wouldn’t be a story” – well, that just pissed me off to no end.

No! That must not stand. Then and there I pledged myself – and this is true – to proving you can write an action story without the reader/viewer having to turn off their brain to enjoy it. It launched my career.

Across decades as a professional writer I’ve upheld that vow as best I could.

But wait! One of my favorite movies is THE FIFTH ELEMENT. Which, to be brief (and candid), makes not a lick of sense.

It snagged me right from the start with engaging characters, humor, rapid pacing, and stunning visual design. It earned my willing suspension of disbelief.

And there’s your Golden Ticket.

Despite what critics of every stripe seem to believe, the salient characteristic of fiction is it isn’t real. To enjoy it, you must accept what you see as real, even though you know it isn’t. Or even couldn’t be. (See Dinosaurs, Knights On.)

But, see, the writer has to earn suspension of disbelief.

They do it by crafting a sufficiently beguiling illusion. Or, to be blunt: dazzle you with bullshit.

My standard way to trick you into suspending your disbelief is verisimilitude: the appearance of realism. I try to make everything that isn’t impossible look probable. Because the fewer impossible things you have to believe before breakfast, the easier, right?

So I ask myself questions. How do the people (and domesticated dinosaurs) eat? Drink? How does an army of people, horses, and huge dinosaurs supply itself on the march?

What’s the culture like? In this case, it’s similar to Europe during the Renaissance. But it isn’t that, because it’s not Earth; it’s Paradise. Same with law. Plus there isn’t a culture: it’s a whole wide world. Every group of people has their own ways and language.

I try to answer as many of these self-asked questions as I can, as fully as I can. And then try real hard not to tell you all that. Which I don’t find easy. Fortunately I have expert help, from my Critical Mass writers group and my editor Claire Eddy, in restraining myself from excess Expository Dumping.

The better the environment, human and natural, works – the more everyday life, no matter how wildly it diverges from your own, appears to be just Everyday – the easier it is to trick you. By getting you to agree to be tricked.

It works like movie magic: the green-screen and the puppets have to not look like green-screen or puppets. It’s important that the strings not show. Or not too many of them. And how better to ensure that than to make sure the audience has better things to do than look for those strings?

Most important for me? Human (and animal) interactions must feel real. They must reflect the actual ways people behave and respond to things, whether petty frustrations or massive danger. And to each other, most of all.

It’s all about the characters. What they want, what prices they pay. What the stakes are for them – what do they stand to lose? And that’s your story.

Otherwise, it’s just a fireworks display: flashy, noisy, pretty – and fades away the instant the last skyrocket sparks do. 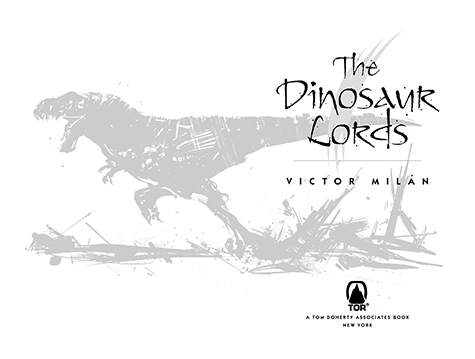 VICTOR MILÁN is best known for his award-winning novel Cybernetic Samurai. In previous worlds he’s been a cowboy and Albuquerque’s most popular all-night prog-rock DJ. He’s never outgrown his childhood love of dinosaurs…and hopes you didn’t either. The Dinosaur Lords is the start of a sprawling epic fantasy series. Victormilan.com. @VictorMilan.

All The People That You Used To Be: William Ritter on the Thirteenth Doctor