Today we welcome Jessica Spotswood to the blog to give insight into editing A Tyranny of Petticoats. 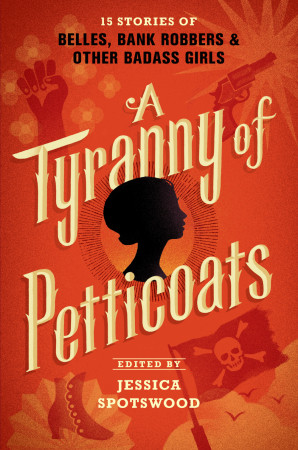 The story of A TYRANNY OF PETTICOATS begins a little over two years ago. My friend April Genevieve Tucholke had just announced her horror anthology, SLASHER GIRLS & MONSTER BOYS. I was fascinated by and curious about the anthology process, and April suggested that I should organize my own. I was intrigued by the idea…and really intimidated. I had helped playwrights develop new work in grad school as a dramaturg, done some freelance editing, and worked with an exacting editor at Penguin on my own historical fantasy trilogy, the Cahill Witch Chronicles. But was I up to the task of editing writers I admired so much? I hadn’t even written a short story since college. I shoved the anthology idea into the back of my brain…but it didn’t stay there for long.

A month later – February 2013 – I was on a beachy writing retreat with my friends Andrea Cremer, Marie Lu, and Beth Revis. I mentioned that I’d been toying with the idea of editing an anthology of feminist historical fiction.

The theme had never been in any doubt. I grew up right outside Gettysburg, PA, site of perhaps the most decisive battle in the Civil War. My family and I went for hikes and picnicked on the battlefield. I grew up reading historical fiction by Louisa May Alcott, L.M. Montgomery, Laura Ingalls Wilder, Frances Hodgson Burnett, and Margaret Mitchell. One of the reasons I sought out historical fiction instead of straight-up history was because I wanted to read about girls, and their stories were mostly missing from my father’s collection of biographies about statesmen and presidents and generals. Despite their many important contributions, women – especially queer women, women of color, and women with disabilities – have too often been erased from history.

All three of my friends – bless their hearts – said I should go for it, and that they’d write for me. How could I say no, with three terrifically talented New York Times bestselling authors on board? I took the leap and emailed my agent. He was supportive, but warned me that while editors love anthologies – they get to work with so many talented authors! – it’s often a passion project in terms of sales.

I was okay with that. As we worked out the details, narrowing in on the hook, I realized that what I really wanted to create was an anthology of stories about clever, interesting girls American girls throughout history, written by clever, interesting (though not necessarily all American) women.

The next step was to figure out our list of authors. Many of my authors are friends (critique partners, agent sisters, fellow members of debut groups) and I emailed them directly; others my agent approached via their agents; a few were suggestions from Candlewick, our publisher, once they had bought the project. It is, I think, a good mix. Some of our contributors – Katherine Longshore, Kekla Magoon, Robin Talley, and Elizabeth Wein – are known for bringing real history – of the doomed wives of Henry VIII, the black Panthers, 1950s Virginia during school desegregation, or female pilots during World War II – richly to life. Others – Marie Lu, Marissa Meyer, Beth Revis, and Leslye Walton – are trying their hands at historical for the first time. I wanted an inclusive group of authors in many ways – women of color, queer women, bestsellers, established midlist historical authors, debuts, women who’d grown up as immigrants and rural poor and solid middle class all around the country.

The only directives I gave them for their stories were that they needed to be between 5000-7000 words, they needed to be about an American girl at some point in history, and the setting needed to play an important role; each story needed to feel like it couldn’t take place anywhere or any-when else. I also suggested that we think diversely in terms of geography, historical eras, and our heroines’ races, sexualities, classes, religions, and opinions on all manner of things. America is a melting pot. I hoped our fifteen stories could, in some small way, reflect that reality.

Each author gave me a brief, paragraph-length story pitch. But it’s hard to know from just a paragraph how – or if – a story will work. What will drive the heroine? Will the setting come alive? Our authors turned in stories in September 2013, and over that fall and winter we did 2-3 rounds of edits. Our Candlewick editors sent me their big-picture thoughts on each story, which I incorporated with my own thoughts into edit letters to help the authors tease out themes and clarify character motivations and vivify settings. Then we did a round or two of line edits, tweaking the nuances and adding details to each story. Then copyedits, to address grammar and punctuation and potentially anachronistic word choices (so important for historical fiction!). Throughout it all, my fourteen authors were a joy to work with. There are no divas in this bunch!

As editor, it was fun to get to write the introduction and weigh in on things like jacket copy and potential titles. The original title had been PETTICOATS & PISTOLS, but I love the new title, A TYRANNY OF PETTICOATS, which was a suggestion from contributing author Andrea Cremer and comes from a John Adams quote regarding the risk of involving women in the new democracy! Our Candlewick editor called it “powerful, with a bit of flounce,” which was just what I was going for. And after a lot of back and forth, with some suggestions that we deemed too academic (we didn’t want anyone thinking this was nonfiction!), we went with my suggestion for a subtitle: 15 Stories of Belles, Bank Robbers, and Other Badass Girls! We agreed easily on putting the stories in chronological order, and on including a brief author’s note at the end of each story regarding inspiration and research.

And now… two years later… our anthology, my passion project, is finally reaching readers. A book of stories all about girls throughout American history.

Our heroines are monsters and pirates and screenwriters and schoolteachers. They are brave and scared, uncertain and sure. They are white and Chinese American and Black and Native American. They dress as boys if that’s what’s needed to get the job done, whether it’s robbing banks to feed their families or sinking a Spanish ship off the coast of the Carolinas. They kiss girls or boys or no one at all because they’ve got other important things on their minds, like catching spies. They debate marriage proposals, murder, and politics with equal aplomb. They are mediums and assassins, heiresses and hobos, bartenders and bank robbers. Their friends are faithless, their heroines die – perhaps some die themselves – but they carry on because there is a spark that lives inside them that refuses to be extinguished. They are naïve and world-weary, optimistic and sad, beautiful and terrible.

Most of all, I hope you will find them interesting.

About A Tyranny of Petticoats:

Crisscross America — on dogsleds and ships, stagecoaches and trains — from pirate ships off the coast of the Carolinas to the peace, love, and protests of 1960s Chicago. Join fifteen of today’s most talented writers of young adult literature on a thrill ride through history with American girls charting their own course. They are monsters and mediums, bodyguards and barkeeps, screenwriters and schoolteachers, heiresses and hobos. They’re making their own way in often-hostile lands, using every weapon in their arsenals, facing down murderers and marriage proposals. And they all have a story to tell.

Jessica Spotswood is the author of the Cahill Witch Chronicles, a historical fantasy trilogy. She grew up near the Gettysburg battlefield, in Pennsylvania, but now lives in Washington, D.C., where she works for the District of Columbia Public Library system as a children’s library associate.

We have two copies of A Tyranny of Petticoats up for grabs. To enter use the form below and good luck!